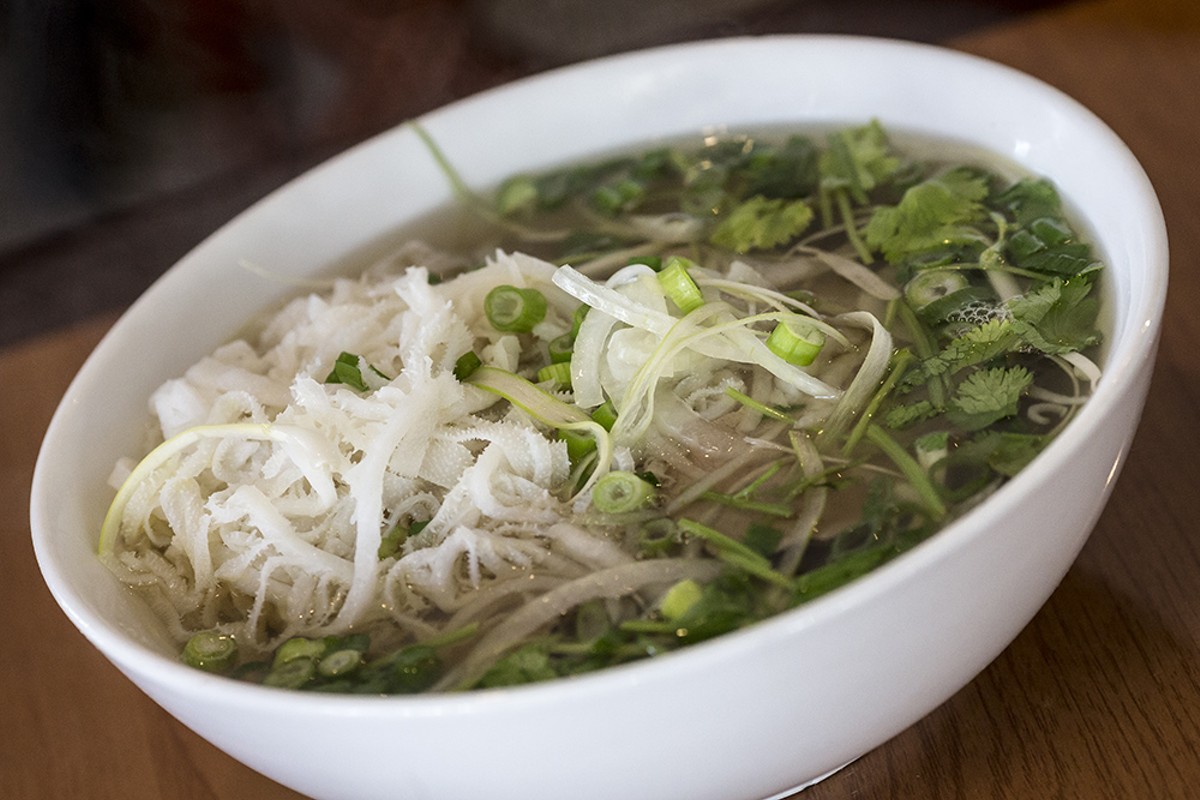 Maitland's restaurant scene, anchored by such long-serving mainstays as Antonio's, Athena's Roasted Chicken, Kappy's, Buca di Beppo and Seoul Garden, was in dire need of a culinary transfusion. So when ShishCo. Mezze & Grill, Francesco's Ristorante and Luke's Kitchen + Bar opened their doors, the injection of fresh blood couldn't have been more welcome. Hell, Maitland is poised to become a dining hot spot, with Teak Neighborhood Grill opening in the Village at Lake Lily next month and Clay Miller's food hall and restaurant moving into the Maitland City Centre in 2018.

Drawing far less fanfare is iPho, a no-fuss noodle joint that quietly shimmied into the space previously occupied by Brown's Deli. The interior? Well, glee-inducing it's not. Sketches of pastoral life on those stark, morose walls don't exactly pep up the atmo, and neither does the high TV-to-square-foot ratio.

From the menu, drab, just-passable summer rolls ($4) with fried tofu didn't buoy spirits any either. The requisite crunchy freshness just wasn't there, and the ingredients seemed loosely loaded (not snugly stuffed) into the rice wrapper. No, what lifted the proverbial clouds was a savory pancake ($9.95) of rice flour and turmeric griddled to a crackly gold. Folded in were pork, shrimp and bean sprouts, made more nom-worthy with a quick dip into zingy nuoc cham.

But, really, we were here for the soup bowls. When it comes to pho, it's all about the broth; and when it comes to broth, it's all about the bones. Now, could the broth in their pho be beefier? Sure, but I'd likely always answer "yes" to that question. The broth does, however, veer toward the sweeter side, so it's a good thing I opted for the addition of oxtails ($3) to, well, beef it up some. The spicy beef and pork noodle soup ($9.95) featured thicker rice noodles in an unabashedly heady pool of lemongrass, a la Thai tom yum. It's not a soup for the faint of heart, but for the sufferer of cold, it would probably do wonders.

Clay hot pots also feature prominently at iPho, and we methodically pecked away at the "harmony" pot ($12) with its mix of chicken, shrimp, and assorted veggies. It was nice, no doubt, but I have my eye on the grilled honey short ribs ($14.95) and crispy fish ($12.95) clay pots on my next visit. Same goes for a newish banh mi menu that our server failed to inform us about until we saw a family specifically ask for it. Other peeves: The pacing was off on our visit, so there were long stretches of discussing the drab interior between one appetizer and the next; then more discussion about sticky floors between appetizers and mains. Oh, and the irritating ring tone of the restaurant's phone needs to change. I know they might be putting the "iPho" in "iPhone," but for the sake of happy customers, how about an old school ring-ring?

There is another iPho – the original in the Oaks of Lake Mary plaza on Lake Mary Boulevard – though alcohol isn't served there. Not a big deal, because the pleasing potables of the non-potent kind are the ones that deserve attention at iPho. Enjoying your meal with a soursop shake ($3.75), salty lemonade ($2.95) or Vietnamese coffee with condensed milk ($3.85) just livens the experience and, frankly, livening one's experience here may not be a bad thing.