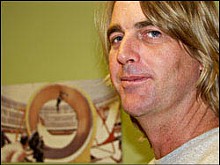 He grew up in southeast Orlando in the 1970s, when the eastern edge of the city stopped at Conway Road and a boy could take a .22 and shoot rabbits in the orange groves north of the airport. He built three tree houses in his backyard, connected by cables and a swing, then moved onto building seamless skateboard ramps out of plywood and two-by-fours. The ramps were popular -- 150 or more kids would gather in a backyard to compete on them.

From the backyards of Orange County, Tim Payne moved to building wooden skate parks across the world and eventually for Frank Hawk, father of professional skateboarder Tony Hawk. Frank Hawk selected Payne in 1986 to build wooden ramps for the newly formed National Skateboarder's Association. Payne formed his own company, Team Pain, and eventually built 150 wooden and 28 concrete skate parks all over the world, including parts of the 100,000-square-foot Woodward Skatepark Training Facility in Pennsylvania. He even built ramps for competitions and demonstrations aired on ESPN and MTV. On one such special three years ago, Tony Hawk did the world's only 900 degree (two-and-a-half times around) rotation on a skateboard. In 2000, Payne became the Skatepark Association of America's only lifetime-achievement award recipient.

Orlando, meanwhile, condemned skateboarding to a slow, painful death. After the city annexed Payne's neighborhood in the late '70s, it made nearly a dozen residents who owned Payne skate ramps tear them down because they were too hazardous and didn't conform to city code.

In 1982, the city passed an ordinance prohibiting skaters from using downtown streets and sidewalks. Skaters, some crying, marched on City Hall, to no avail. "I know a lot of guys whose careers were lost because they had no place to practice," says Payne, whose shoulder-length blond hair keeps the 43 year old looking like a teenage surfer. "They started drinking beer and sitting on the sofa."

Through the years, Payne kept after city officials, who constantly broke promises to build a skate park. But several years ago, Glenda Hood, who fancied herself the parks mayor, finally agreed to build one. She provided an initial budget of $800,000 for a medium-sized, 30,000-square-foot park on a three-acre site in Festival Park, near the executive airport at Primrose Drive and Livingston Street.

According to Payne, Hood asked him to design and build a skateboard park second to none. "Her intention was to have a state-of-the-art park that Orlando could claim as its own," he says. "Money was no object."

City officials went to work too. They began adding features to the park that cut into the budget. They wanted a tot lot, a pro shop, an in-line skating trail around the park, lights and a $100,000 rest room. By May of last year, the skating part of the park was down to a budget of $245,000 and a size of 10,000 square feet, slightly larger than a basketball court.

Payne complained to the site manager, Tom Connery, but Connery refused to ask for more money or more room. "I asked him if I could talk to anyone else about getting more funds approved for this project," Payne wrote in a letter to the mayor, "and Mr. Connery advised that he was my line of communication with the city and that other communication was strictly forbidden."

Payne saw a chance to make his points known at a May 2002 City Hall meeting during which Hood, Connery and other city officials asked skaters what kind of park they wanted. "Prior to the meeting," Payne wrote, "Mr. Connery told me to go against my personal beliefs and professional judgment and convince the city that a 10,000-square-foot park was acceptable by today's standards and would be an exceptional achievement for Orlando. Mr. Connery indicated that if I did not convey my support for the 10,000-square-foot park, he would not allow me to speak at the meeting. This went against everything I worked for or believed in."

Payne had skaters sketch on paper what kind of park they wanted. Then some of them stood and spoke, saying that 10,000-square-feet was too small and that they were worried about collisions and injuries. As a result, Hood upped the budget to $1.3 million, enough to build a 30,000-square-foot park.

"Tom Connery was so pissed off," Payne says in an interview. "Not that I overrode him but that I used my intelligence to get the public to override him."

But, as Payne was about to find out, payback's a bitch.

When the park went out for contract proposals, Team Pain partnered with Clancy & Theys, a national construction firm whose Orlando office specializes in building schools. (They built the Nap Ford Charter School two years ago, among others.) Team Pain had the skate-park expertise and Clancy & Theys had the management experience.

The five-member selection team, comprised completely of Orlando city officials, including Tom Connery, met in August to decide which of three contractors would build the park. Connery began the meeting with what he described as background on Tim Payne, most of which was unflattering. He said Payne was slow to produce a design, couldn't provide a cost estimate and was frustrating Byron Lastrapes, an architect with the Rhodes and Brito firm selected for the overall park design (including pro shop, landscape, lighting, retaining wall and fencing). "Based on his track record with Byron, Byron has to be extremely frustrated," Connery said.

Connery went on to say that if Clancy & Theys had partnered with a different skate-park specialist they probably would have gotten his vote to build the park. "But the fact that I have to meet with a middleman who is sometimes nonresponsive, who doesn't play on the same team and goes behind my back when he wants to is a negative for me," Connery said.

Connery's comments seemed to be infectious as other committee members became concerned that Clancy & Theys would be unable to "control" Tim Payne. "I was least impressed with Clancy & Theys," said Patty Baker, a city recreation program manager. "It seems like they're putting a lot of their eggs in a basket with Tim."

When one of the committee members suggested Payne might have been better at the design of the park than bulding it, another committee member responded, "So far he handled himself pretty well in the political part. He pulled that stunt in the meet-the-mayor where he packed the audience with a bunch of skateboarders just to get some more money into the project." (Listening to an audiotape of the meeting, it was difficult to discern who made the comment.)

Committee members selected BRPH Construction Services Inc., to build the park based on the assumption that the downtown contractor would partner with Hardcore Shotcrete Inc., an Arizona skate-park builder. But BRPH couldn't reach an agreement with Hardcore, opting to partner with RCMC, a New Jersey-based company that has built all of the Vans skate parks, including the one located in the tourist area in south Orlando.

Payne pulled the audiotape of the selection meeting and knew he was screwed. He says contrary to what Connery said at the meeting, Team Pain was the only company to provide the committee with a cost estimate ($800,000 for a 30,000 square foot park) and that the only delay in the design of the park was caused by changes made by city officials. Payne had to redraw the design four times. "What hurt the worst is that I couldn't defend myself," he says. "`Connery` couldn't do it to my face. He had to do it behind my back so I couldn't defend myself."

In September, Payne fired off a letter to the city complaining of Connery's behavior. David Metzger, the city's public-works director, returned a letter saying the selection was nothing personal. "Fair consideration of all proposers is paramount to all members of the committee," Metzger wrote.

People caught in the middle, meanwhile, are staying out of the disagreement. "I don't want to comment on this," says Byron Lastrapes, the architect supposedly frustrated by Payne. "I'm staying neutral. Tim and I are friends -- I just saw him the other night -- and I'd rather keep it that way. I have no differences with him."

Lastrapes added, however, that the relationship between Payne and city officials was bad chemistry. "The city operates differently than the way Tim operates. That's the whole thing."

Payne says he still supports the Orlando park and was reluctant to speak with the media for fear of stigmatizing it. He recently test-skated there and found that RCMC did a good job interpreting his design. "It's awesome," Payne says.

Even so, the beginner's section is small, the height of the bowls and walls is about a foot lower than Payne designed and the park has no street section -- with the kind of angles and slopes you find on a downtown street -- which is important because most kids are street skaters.

Orlando officials are still optimistic that their 25,000-square-foot park, set to open Aug. 2, will be among the best in the southeast. "We expect `ours` will be recognized as one of the finer parks of its kind in this part of the U.S.A.," Metzger wrote in his letter to Payne.

They'll have stiff competition. Payne himself built a 30,000-square-foot park, complete with a street course, for $800,000 in Oviedo, which will open July 12. Skaters will have to decide whether the Orlando park, which cost almost half a million dollars more, is a better ride than Oviedo.

In any case, it's too late now for the Orlando park to be built by a homegrown legend.