By Jessica Bryce Young @jby789
click to flip through (2) 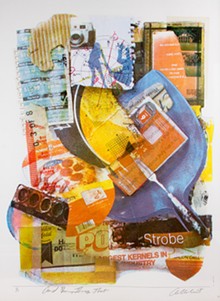 “Collage,” author Donald Barthelme said in 1975, “is the central principle of all art in the 20th century.”

From Brion Gysin’s literary cut-ups to Joseph Cornell’s boxes, Tristan Tzara’s Dada poetry to Gregg “Girl Talk” Gillis’ pop-tune mashups, it’s undeniably true that the assemblage of found elements to make an artistic statement rose to prominence in the last century and has continued into this one – perhaps it’s an inevitable side effect of the total media saturation we now live in. (If you’re interested in reading more about literary/musical/visual collage, I highly recommend Jonathan Lethem’s staggering essay “The Ecstasy of Influence: A Plagiarism.”) Twelve21’s latest show explores those magpie visual tendencies while also proving that when it’s done correctly – as art, not theft – collage is always more than just the sum of its component parts.

Conrad Crespin and Austin Moule work in classic mixed-media collage style – found objects, images and text fragments juxtaposed to pull a strong new signal from random visual noise. And when we say Moule’s work is extremely reminiscent of Robert Rauschenberg’s, it’s not meant as a jab, but simply part of that whole “ecstasy of influence” thing.

Madeleine Peck Wagner combines spray paint, acrylics, graphite and tape on birchwood boxes – an abstract series of monuments to bridges and overpasses, which Wagner sees as “a metaphor for transition and change.”