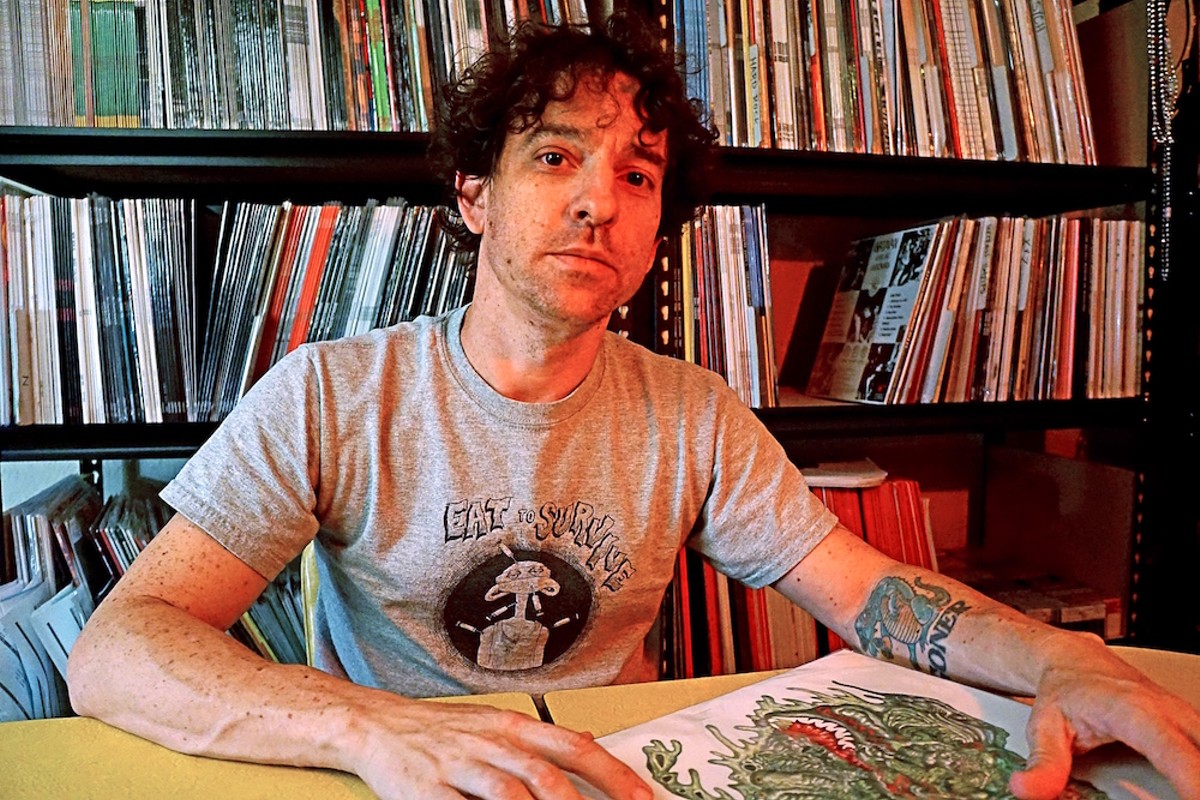 The slow creep into middle age has been known to fill many a man with deep existential dread, leading them to throw money in foolish directions. Maybe it's time to get that sports car? Maybe it's time to get that motorcycle? Local punk scene mainstay Rich Evans, heading further into his 40s, turned that selfish cliché on its head and instead started another, more personal outlet to release new music. "I joked that I couldn't afford a sports car, so I started another label," deadpans Evans. "But this time I wanted to do something that had a little more artistry to it."

This brand-new record label, the intriguingly named Mind Meld, released its first LP into the world in January, a collection of solo works by Timmy Vulgar's Genetic Armageddon titled Music From the Other Side of the Swamp. So for those keeping count, Evans is now owner of Mind Meld, runs Total Punk Records, is (we'd posit) the Vince McMahon of wrestling non-fed Mayhem on Mills and crams in some drumming for Golden Pelicans. According to Evans, the birth of Mind Meld will have no impact on Total Punk's operations (boasting over 70 releases and counting); he just had a different creative itch to scratch. "I still love doing the Total Punk stuff," he says, "but after you've been doing something for awhile, you get kind of restless."

Out of this restlessness Mind Meld was born, and its brief is ambitious. Evans approached musicians he looked up to and told them, "This is a chance for you to express yourself any way you want, and I'll foot the bill." In contrast to Total Punk's strict sonic and visual aesthetic, Mind Meld is the equivalent of an open door. Artists submit whatever solo recordings they want, regardless of genre or lack thereof, and also design their own record covers and inserts, with Evans promising to duly release the results on vinyl. "I'm getting older and I wanted to be able to release different stuff that was really personal," says Evans. "I called the label Mind Meld because I wanted it to be a doorway into the songwriting process of a musician."

"When I was in the middle of figuring all of this out, Timmy [Vulgar] sent me those recordings out of nowhere and I just thought, 'Oh my god this is exactly what I've been thinking about.'"

Through that initial bit of telepathy, Mind Meld was off and running. And Timmy Vulgar, best known as frontman of Detroit garage titans Timmy's Organism, has set the bar high for future releases with his album. The record is a look deep into Vulgar's creative mind, from the garish dayglo-Lovecraft cover art to the freewheeling insert (all drawn and designed by Vulgar) to the songs, deeply-fried psych-rock weirdness and space-rock soundscapes. Evans remembers seeing the finished products for the first time and getting that same feeling as when he first started releasing music, enthusing, "When I got the first covers and the first labels for this album, I remembered that excitement. It felt really fresh and new again."

Vulgar refers to the album as "music from the other side of the fence." And he echoes Evans' delight with the final product, in his own singular fashion, cryptically telling Orlando Weekly, "My child was born. It's such a beautiful baby that shrieks noises and weirdo sounds when it plays."

Evans is eager to start work on the next release, with underground luminaries like Mr. Quintron, Chad Booth (Gary Wrong), and David Nance all hard at work on their Mind Meld releases. Quintron even quipped to Evans after he asked him to join the roster, "Oh, so you're starting a real Total Punk Records!" Endearingly, Evans cops to still working up the nerve to ask Chris Gunn (the Hunches) and the enigmatic Ben Wallers (Country Teasers) to each release albums for the label too.

The current mission of Mind Meld has a definite shelf life; Evans wants to do six records in this series and then move on to different themes. "At a certain point you have to start making compromises," he says. "Especially if you want to keep putting product out. 'Oh yeah, that guy's pretty good,' or 'People like that.' It'll let me know when it's done. ... Or my wallet will."

« Dreaming of love with Cold Cave's Wes Eisold   |   The Sh-Booms rep the City Beautiful with new album, video and tour »