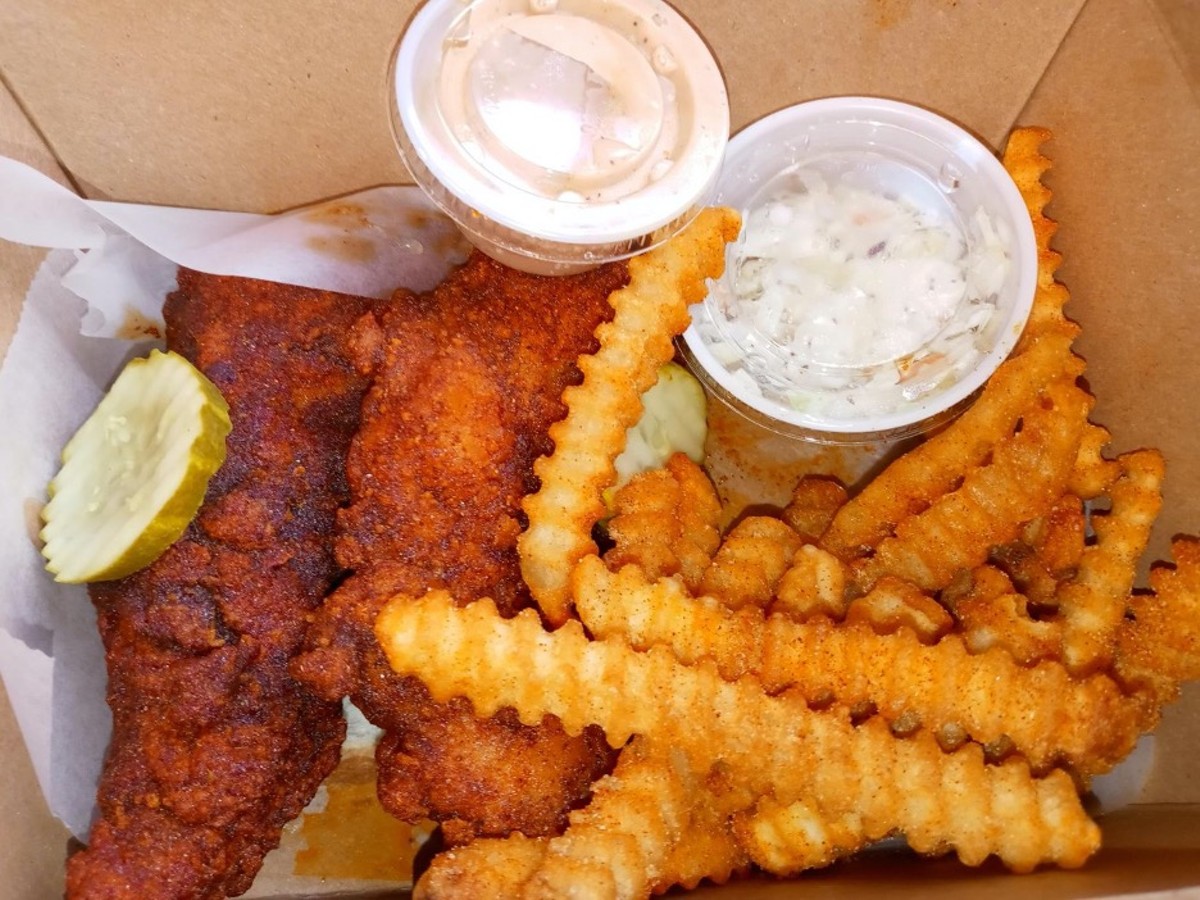 I don't know about you, but I had to rely on a lot of comfort food to get through 2021. As a result, I couldn't narrow my favorite Orlando dishes of the year down to a top five, or even a top 10. So here's a list of my Top 12 Tastes of 2021 — one for each month of the year, if you will. I hope you try these for yourself, support our local restaurants, and love them all as much as I did!

While this list is in no specific order, this was absolutely my No. 1 favorite thing I ate all year, so props to chef Denni Cha for drawing from his Native American heritage to create it. The fry bread base is light and fluffy, with a delicately crispy, golden-brown shell, almost like a savory doughnut. It's topped with braised beef, beer cheese, cilantro-garlic aioli, salsa, corn, black beans and potato sticks, for an astonishing amalgam of fantastic flavors and tantalizing textures. (instagram.com/uncle.dendogs)

As much as I love sandwiches, I've never eaten a Philly cheesesteak that blew me away, even in Philly ... until now. Cavo's is a friendly, welcoming casual restaurant in Thornton Park where I would be comfortable spending hours, especially with this cheesesteak. The freshly baked soft roll, adorned with sesame seeds, holds up to the heavy load inside — tasty thin-sliced ribeye (the king of steaks as far as I'm concerned), melty white American cheese, and plenty of sautéed onions, although if you ask me, you can never put enough sautéed onions on anything. It lived up to the hype and made me realize I do like cheesesteaks; I just hadn't found a worthy one until Cavo's. (cavosbar.com)

This was the best pasta dish I ate in 2021, from one of my favorite restaurants in Orlando. I usually go to Jason and Sue Chin's seafood-centric spot in Baldwin Park to indulge in oysters, but these squared-off strands topped with shelled clams from Cedar Key, blistered tomatoes, herbs and salty, fishy, cured bottarga for a real umami bomb, is worth adding onto whatever you went there planning to order. The flavors packed an intense punch, and the house-made pasta had an ideal chewy texture. (theospreyorlando.com)

South Orlando seafood mainstay High Tide Harry's happy hour might be the best deal in Orlando, with raw or steamed oysters and clams for 99 cents each, or charbroiled oysters for $1.50 each, plus $6 apps. My server recommended these, and I'm so glad I listened. Glistening with butter, topped with garlic, herbs and breadcrumbs, and served with a wedge of garlic bread, these decadent delicacies were warm, soft and slightly crunchy. Plus, High Tide Harry's is just a wonderful, casual seafood restaurant, and its owners, the Heretick family, run a tight ship. (hightideharrys.com)

This is pastry perfection, courtesy of gifted baker Edward Hawk Neal-Paci. He crafts them of croissant dough made with rich European butter, in 81 separate layers, and adds five kinds of fresh citrus juices: orange, lemon, lime, grapefruit and tangerine. This may be the finest dessert I've ever eaten, and it deserves to take its rightful place as the official dish of Orlando. (edwardsgourmet.com)

If you've never had a dosa before, it's a gigantic Indian rice crepe that is large enough to turn heads, unbelievably thin and crispy, and usually stuffed with some combination of potatoes, vegetables or curry, with chutneys for dipping. The street special dosa at Bombay Street Kitchen, my new favorite Indian restaurant, comes filled with vegetables and served with a lentil-based curry called sambar, along with coconut chutney. I also recommend the stupendous masala dosa, stuffed with yellow curry-spiced potatoes and curry leaves, if you want more than one dose of dosa. They are filling and satisfying, whether you're a vegetarian or not. (bombaykitchenorlando.com)

When Pizza Bruno announced hoagies as a new lunch special in October, I dropped whatever I was doing at work and raced over there. Italian subs are my weakness, and this one has everything: soppresata, pepperoni, prosciutto, caciocavallo cheese, Calabrian chiles, mixed greens, heirloom tomatoes, red onions and Italian vinaigrette on a crusty Italian semolina baguette from Olde Hearth Bakery. (pizzabrunofl.com)

Chef Asawin "AJ Knight" Jockkeaw's restaurant-within-a-restaurant (inside U-Roll Sushi on East Colonial Drive) specializes in the delicious Hainanese chicken and rice, but I immediately fell in love with this dish of marinated pork belly and shoulder with toasted garam masala, braised with hunglay curry paste, shallots, pickled garlic, fresh mango and ginger and tamarind paste. Every piece of pork was tender enough to cut with a plastic fork and melted in my mouth. It comes with steamed jasmine rice, but the spiced yellow rice served with some other dishes is even better. Chef AJ offers Thai, Chinese and Indian dishes; no matter what you try, you will be astonished. (mengskitchensorlando.com)

First I listed an Italian sub from a pizzeria, and now pizza from an Italian deli. But Sicilian pizza has been my favorite kind of pizza since I was a kid, and so few pizzerias even bother making it. Stasio's serves gigantic rectangular slices of Sicilian pizza cut into four smaller squares, but only on weekday afternoons, and they sell out quickly. It is the perfect balance of soft and pillowy with a nice crunchy crust, covered with robust red sauce and high-quality melted mozzarella. (instagram.com/stasiositaliandeli)

My wife and I both fell in love with this fried rice dish this year, which includes eggs, green onions and fresh cilantro, in addition to tender and juicy minced boneless roast duck. But dried grapes? Those are raisins — specifically sultanas, or golden raisins, and they add a chewy texture and a pleasant sweetness that you're going to love. There are a lot of jokes about bad cooks ruining dishes with raisins, like sneaking them into potato salad to ruin cookouts for unsuspecting family and friends, but you'll never believe how tasty this is until you try it. (yummyhouseflorida.com)

When you walk into the tiny hole in the wall Mediterranean Deli, you are going to be greeted with a smile and "My friend!" by Walid, who will then make you the best gyro in the city. You'll watch him slice a handful of fresh, seasoned gyro meat (lamb and beef) off a rotating spit and stuff it into a soft pita after warming it on the grill. Then he'll fill it to bulging with tzatziki sauce, lettuce, tomato and red onions. Get the combo. You deserve a little treat ... or in this case, a huge one. (981 W. Fairbanks Ave.; no website)

I championed Chef Kwame Boakye's hot chicken business when he first opened his food truck in 2019, but he has since moved into a brick-and-mortar location on East Colonial Drive, just east of Bumby Avenue, and recently celebrated his second anniversary. (He is also the nicest, friendliest guy.) My regular order there is the Hot Box, with two huge chicken tenders, "secret-seasoned" crinkle-cut fries (probably my favorite fries anywhere in Orlando), Signature Soul Sauce and some necessary side items to cut the intense heat of the chicken: creamy-crunchy buttermilk coleslaw, crisp sliced pickles and the most important slice of white bread ever. This is the only comfort food on my list that causes discomfort, but it's so worth it! (facebook.com/eatchickenfire)