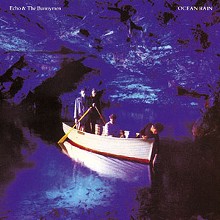 Astronaut news is always topical to us Central Floridians, and here's some that involves righteous music instead of murderous jealousy and adult diapers. On June 13, NASA astronaut Col. Timothy L. Korpa is taking his favorite album, Echo and the Bunnymen's 1984 magnum opus Ocean Rain, into space. If you thought the perfect drama of "The Killing Moon" was used to powerful effect in Donnie Darko, can you fucking imagine what it'll be like up there? Even frontman Ian McCulloch expressed keen curiosity, saying, "I cannot wait to hear from Tim what it is like to listen to ‘The Killing Moon' in the actual glow of the moon."

Pretty opportune timing, actually, since Ocean Rain is getting a box-set reissue May 30 that will include a live version of the album recorded at the Liverpool Arena last November plus a DVD documentary and booklet. McCulloch and guitarist Will Sergeant will sign — to the name of the buyer's choice -— the first 1,000 copies ordered.

Since the supporting cast for the Vibrators bill (May 18, Will's Pub) was all local, I checked in. The punked-up power pop of the Rondos wasn't bad, but it's not there yet. If their melodies don't show more personality, they'll remain just another faceless throwback band. Though stronger, the by-the-numbers classic punk of Virgins (not to be confused by NYC's the Virgins, who are playing the Social June 1) faces the same peril. And Libyan Hit Squad has gone completely eggheaded, leaving their punk roots further behind by the day in favor of geeked-out metal technicality.

Adding a band component to the semi-regular audiovisual DJ party Pop Off (May 21, the Social) was Brooklyn multimedia pop act Mixel Pixel, whose sound merges lo-fi and electronic with occasional dabs of psychedelia. Like many experimental art groups, lots of their ideas were incomplete. What they lacked in live chops, however, they compensated for in inspired videos. And, hey, keyboardist Kaia Wong rocked a triangle! That's gotta be worth something, right?

Though similarly art-minded, local electro- dorks Yip-Yip are the quintessence of the realized idea — to a fault. Their concept is so narrow and rigidly defined that it can be excruciatingly one-note. Then again, they've always been one of those acts you respect more for what they represent than what they actually do. Evolution occurs in microscopic ticks in Yip-Yip's world, so I suppose the addition of a set of cymbals and new summer outfits could be considered news.

In a mostly beige week, Bob Log III (May 23, Will's Pub) rolled into town and ended it with a dazzling exclamation point. One could be forgiven for not immediately recognizing the intellectual brilliance of Bob Log. With a ridiculous stage act that includes Evel Knievel's wardrobe and solicitations for women (and occasionally men) to dip their tits in his whiskey, well, it's almost a foregone conclusion. But make no mistake: This is pure genius.

You can't think of him in strictly auditory terms. On record, I find his blues-punk scramble fascinating and exciting, though I can easily understand why it annoys some. But the total Bob Log experience is far richer than that. It's a three-dimensional thing that necessarily includes his iconic imagery and madcap live performances. It's humor, sickness and badass-ness all in one shot. He's one of those acts that I always beseech people to see live, even if they hate his music. Chances are the concept will click once you do, and you may just find yourself in the choir of the Church of Bob Log III. In fact, the big turnout at this latest show proved that the Orlando chapter is growing.

Y'see, despite his patently unserious take on art, showmanship is something he takes with old-school showbiz seriousness. And it shows in his wildly entertaining performances. Believe me when I tell you that he's up there with the godly Monotonix in terms of legendary live thrills.

Once that hooks you, and it will, you may finally understand why Bob Log is not only the king of the one-man bands but that rarest of creatures: a true original. Supernatural blues guitar chops, warped artistic vision and singular showmanship — yeah, man, that's the deal there.

And, um, God? I know I haven't been your best servant, much less believed in you, but I'd appreciate it if you turned off your faucet. Thanks, Your Soaked Downstairs Neighbor.