This Little Underground: Beach Slang poised to break out

Show up for the opening acts. That's the lesson and reminder of deep weeks like this. Loaded with potential names of tomorrow, they're windows into the future.

Cursive's knotty conceit has, by now, etched this Saddle Creek pillar permanently into the indie-rock pantheon. But look out for Philadelphia's Beach Slang, who opened Cursive's recent sold-out show (March 3, the Social). With some pedigree from underrated '90s pop-punk band Weston, bandleader James Alex Snyder motors further into punk-lifted melodic rock terrain with Beach Slang, wisely trading in a little of yesterday's bounce for a lot of classic drive. What's not only great, but will also perhaps prove more enduring about this new vehicle is that it's got that big '90s heart that's popping right now only without the time-stamped gimmicks. Beach Slang's straightforward anthems are simple but huge, filled with just overdriven soul and the O.G. authenticity of someone who was actually part of the '90s wave. The music is direct but well-aimed and shot with gusto, not unlike the Replacements, whom they covered in the second excellent rendition of "Can't Hardly Wait" heard here in two weeks (the first from Justin Townes Earle at the Dr. Phillips Center).

They sprang a surprise headlining performance the night before with local indie-rockers the Pauses at Will's Pub, which I missed, regrettably. But from what seemed like an aggregate of their own big spirit and positive wind from the night before, they had the room feeling like it was their show for a little while with one of the most dominant opening sets seen in a long time. Fists were pumping, people were leaping onto shoulders and a pit ignited, all for them. Yeah, it looks like they've got a posse in Orlando. The band just signed to heavyweight indie Polyvinyl Records and have yet to release a full-length (due out later this year), but the buzz on Beach Slang is real.

Torche (March 5, Backbooth) kickstarted one of those flooded show nights that thankfully happen from time to time by mashing the pedal to the heavy metal. After seeing the exhilarating heights that Torche prototype band Floor has reached on its triumphant return, it's nice to see some of those lessons of power and simplicity spill back over to Torche's jumbo-jet doom-pop. Their new album, Restarter, is one lean, mean mother, and their in-the-pocket set echoed that focus. 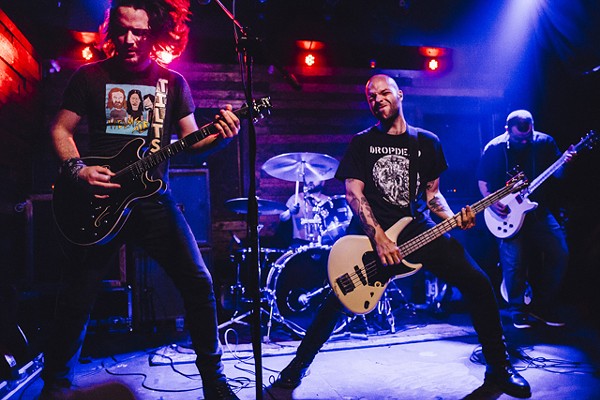 Tampa may have serious metal history, but Miami's got way better taste. As if having breakout stars like Torche isn't enough, Miami's heavy soil just keeps on turning up underground gold. The latest rock to shine was opener Wrong with noisy brute-rock that's cranked with bludgeoning guitar chugs that evoke prime-era Helmet. It's bare knuckles and torque, and it thrills.

But demanding some due respect for Central Florida was Winter Haven's House of Lightning. A band whose royal bloodline includes Dove, Cavity and the aforementioned Floor, they deal in thrash, but it's an expansive vision that, though stylish, has minimum frippery and maximum wallop. A calibrated balance of athleticism and rumble, they're as well-tuned a thrash unit as it gets. With thicker ribs and deeper grooves than most of their peers, they're more about drive and penetration than mere velocity. They're called House of Lightning but, live, they're all thunder.

Up the avenue (the Social), Swamburger Presents hosted Aesop Rock and Rob Sonic, otherwise known as alt-rap supergroup Hail Mary Mallon. This project packs the kind of exponential potential that occurs when two MCs who are also noted producers join forces. Despite their conceptual tendencies, their live vibe jumped with an original roots kind of fire. It wasn't always the tightest rap clinic around, but the spirit was hot and true. Adding heat to the performance was Rhymesayers gunslinger DJ Abilities (of Eyedea & Abilities), whose stone-cold, no-headphones cuts were given some nice spotlight to flex. Under the spell of collective force like this, the capacity crowd was in their palms, ready to go wherever with them. In mainstream days like these, it's good to know that the truth and pulse of the hip-hop underground is not just still very much alive, but here. 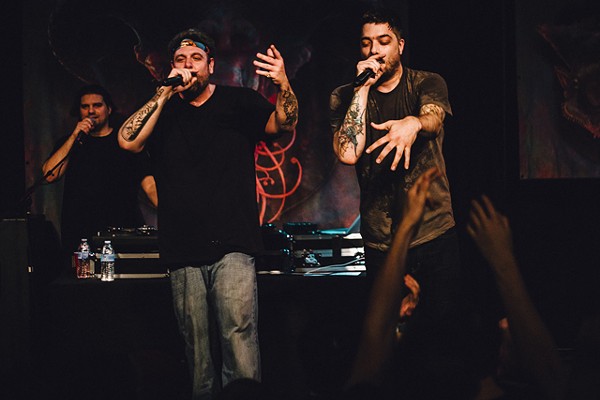