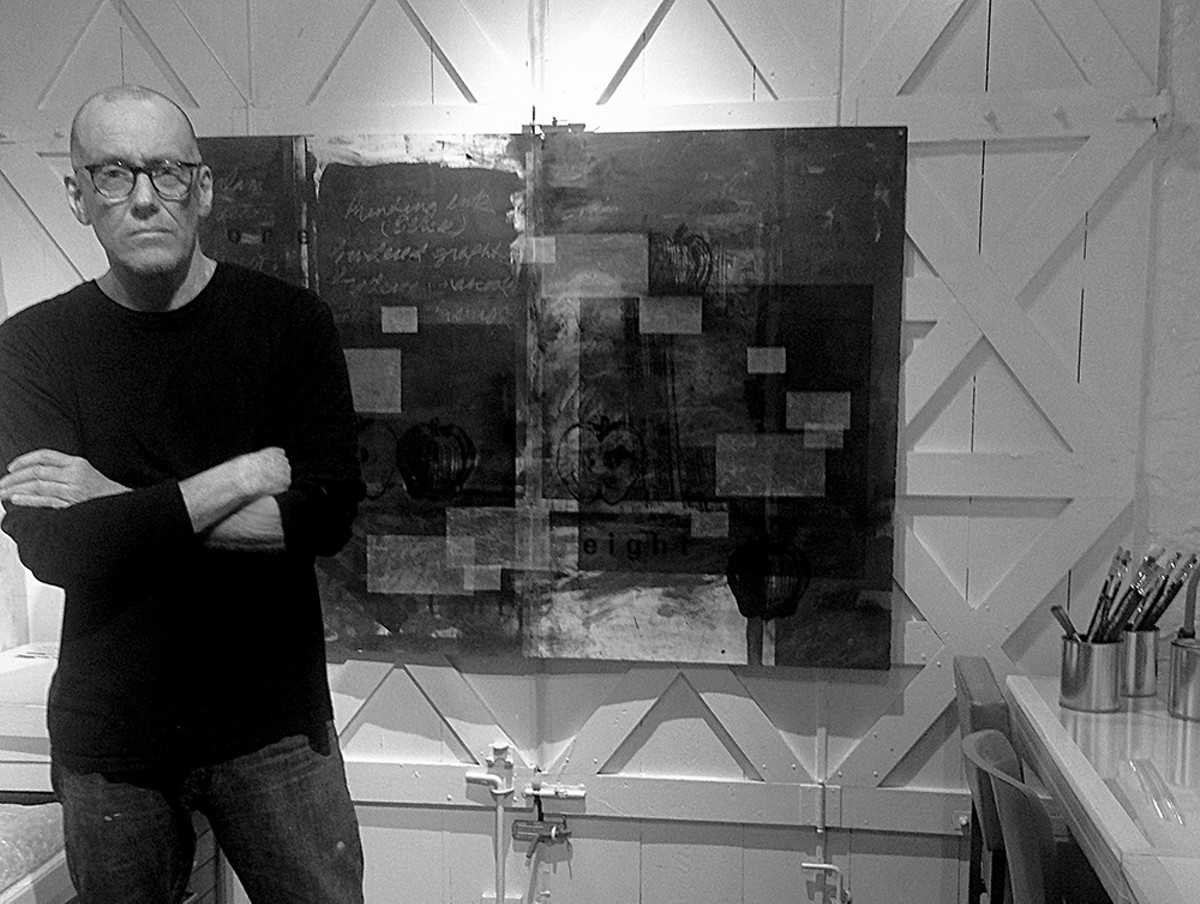 Dan Hess in his studio.

The writing’s on the walls around Orlando, from an Art31 installation to new construction barriers at Disney’s Hollywood Studios

Walls have been much debated of late: where to build them, who should pay for them, how beautiful they will be. Well, you don't have to go all the way to Mexico, because we're already putting up plenty of walls right here in Central Florida, and putting them to better use, to boot.

Last weekend saw the swan song of Art31, the ambitious monthlong event from Art & History Museums – Maitland that spread site-specific experimental artworks across the Orlando area. The effort included works by internationally acclaimed artists (including Dale Chihuly and Jason Hackenwerth) alongside hometown talents like Boy Kong. But even though (full disclosure) my wife helped produce the programming, I only managed to attend one of the last offerings: the debut of Dan L. Hess' multimedia installation, "Loco in Locum," at Canvs on Thursday, March 31.

Canvs has converted the old Church Street Station from a Victorian-ish emporium into a start-up-centric co-working space that plays host to more than 100 tiny tech companies. The facilities feature workspaces, conference rooms and endless coffee, with the grand central atrium serving as event space.

Bisecting the middle of the main hall stood Hess' installation: a pair of massive white wooden walls, built during his March residency at Factur's maker lab, joined together at an obtuse angle to form a super-widescreen projection surface. The audience was made comfortable in a semicircle of soft seats; a pair of blindingly bright Hitachi DLP projectors (provided by Courtney Barnette and Eventxperts) blazed to life; and we were taken on a half-hour head trip.

In discussing the installation, Hess compared his work's structure to "random search history on your computer, how it diverts from one place to another and winds up all over the place." His process involved sorting through countless YouTube clips of Cold War weapons tests, old Hollywood classics and vintage traveling carnivals ("the crazier the better"), then spending more than 70 hours editing them in Adobe Premiere to a handful of his favorite pop songs, including a trio of Pink Floyd classics. The resulting images were overlaid with Orwellian phrases ("Everything Is Wonderful," "Social Media Is My Friend," "Information Is Not Knowledge) and intercut with dialogue from Blade Runner, all in an attempt to "distill it down and re-engineer humanity back into it."

The result was an intriguing intersection of analog and digital aesthetics, with the merge point of the mirrored images creating kaleidoscopic effects. I won't presume to interpret all the inferences in Hess' imagery (though Ray Kurzweil's singularity theories juxtaposed against Moby-Dick was nicely ironic), but it did trigger pleasant flashbacks to syncing Dark Side of the Moon with The Wizard of Oz. As a next step, I suggested adding more projectors, turning it into a 360-degree experience that completely surrounds the viewer, but that could result in brown acid-level freakouts.

Just after Hess' walls came down, many more went up at Disney's Hollywood Studios, where the first sight greeting guests from the parking tollbooths is the tangled wreckage of the half-demolished Premiere Theater. As of April 3, Disney has blocked off most of the park's rear half while new Star Wars and Toy Story areas are built. I attended Saturday's tearful final performance of the 11-year-old Lights, Motors, Action! stunt show (which employed an enormous cast of well-paid stunt performers), and took my last lap around the Streets of America sets and Honey, I Shrunk the Kids playground, which was forced to stay open past its final closing time to accommodate lingering guests. I feel for the cast members whose jobs were disrupted by this move, but at least there's a silver lining: MuppetVision 3D seems safe from demolition, as the surrounding courtyard has been officially renamed after the Muppets on park maps, and new Muppet restaurants are rumored.

By the time Walt Disney World's 50th birthday rolls around in 2021, few fans will mourn this underutilized section of WDW's least popular park, especially if the new attractions live up to expectations, though evidence of budget cuts in new concept art isn't encouraging.

Until then, expect to find construction barriers reducing the park's footprint to nearly what it was back in 1989, before guests were allowed to roam the "half-day" park's backlot sets. In the meantime, will DHS add anything more than simple Star Wars stage shows to snare patrons into paying full price for admission? Let's just say the writing's on the wall.