As a result of the high demand for space, the walls are constantly in flux. Some pieces have been up since the inception of the project, like the Statue of Liberty wearing a gas mask adorning the front of the building, which was created by Noun. Others may only be up for a week before they are painted over, making room for a new creation.

When it comes to recycling available space, there is a method to the madness. Noun is the deciding authority on where new pieces go. A Bronx native, he grew up in a New York borough that has long been a hub for stunning displays of street art. A follower of the famous TATS Cru, he studied graffiti and tagging religiously in his youth, and learned to respect the art form, the culture that surrounded it and the unspoken rules of this underground form of expression. When he moved to Central Florida to be closer to his children, he brought his love of graffiti with him, and was able to offer an authentic perspective to the creation of this venue. 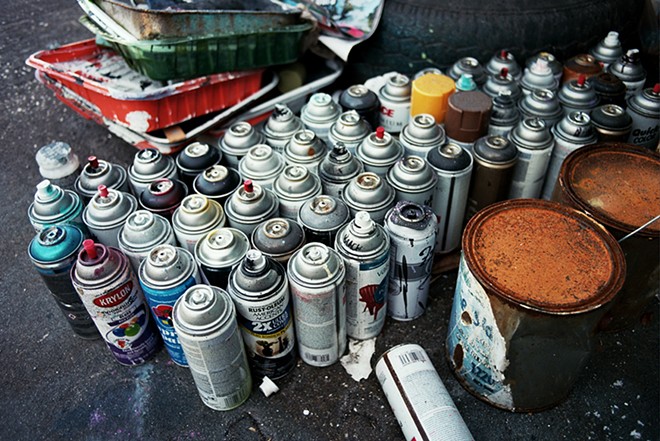 "For those that don't know the rules in graffiti, I use what they call a pyramid system to determine the duration of each piece, and how long it should run," Noun says, describing the process he uses to decide which spaces get repurposed and which pieces remain on display. "It goes: tags, hollows, fills, straight letters, text, characters, murals, productions. You can cover going down, but not the other way around. A tag can't cover a production. That's the rules of the game. If not, it's pretty much a form of disrespect."

As you tour the facility, it's clear to see why these rules are in place. An intricate, colorful depiction of Michelangelo's David by the artist Revel graces the western face of the building. On a small structure located on the east facing block, an intricate lion by Miami-born artist Chaya Av is on display. On the opposite side of the wall, a breathtaking portrait of a woman by Eduardo Smet faces West Central Boulevard. Each piece reflects a painstaking attention to detail and thus is here to stay, for the time being.

Residents from the surrounding area have embraced the space as an integral part of their community, a testament to the fact that the impact of the West Art District goes far beyond aesthetics.

Rai and Noun both attest proudly to the informal youth programs that they've gradually launched since development began. Children from the neighborhood flock to see new art and tend to the small container garden in front. Parents bring their children to the district to keep them out of trouble in a neighborhood that historically has higher rates of crime than many other areas of the city.