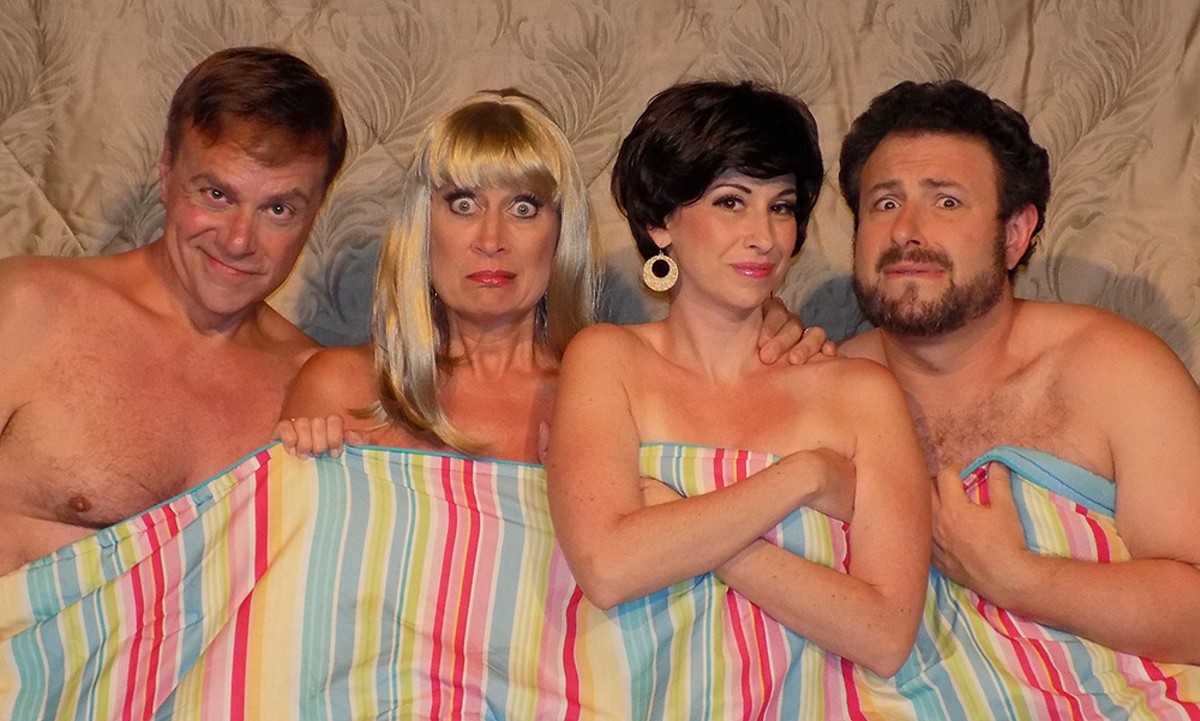 The cast of I Love My Wife gets cozy

America used to be a future-focused, forward-facing country, but lately it seems like we're all about looking backward.

It's true in politics, where one of the major party candidates explicitly promises to turn back the clock to a supposed golden era of greatness. It's true at the movie theaters, where franchises from a generation or two ago (like Ghostbusters and Star Trek) are again atop the marquee. Heck, it's even true in real estate: My wife and I just bought a midcentury ranch house, lovingly restored and still sporting original tile and fixtures straight from the 1968 Sears catalog.

Of course, the dream of living in the perfect past doesn't always align with reality. Once you've endured the Orwellian process of obtaining a mortgage (no easy feat if you're a freelancer, which is why Orlando rents are rising ridiculously) and signed away your firstborn in exchange for that Mad Men dream house, you'll quickly realize that a turn-of-the-century A/C system is no match for modern global warming; your vintage NuTone intercom system only receives religious AM radio; and maintaining a picture-perfect pool and yard costs a pretty penny.

That pull between poignant nostalgia and contemporary complexity also looms large in Stranger Things, the 1980s-inspired Netflix sci-fi drama that's been dominating water-cooler conversations and Facebook feeds since its release a few weeks back. If you haven't binge-watched all eight episodes yet, go ahead and do so now. I'll wait. ... OK, as we all now know, half the fun of the show is spotting the countless homages to genre cinema classics, from the obvious – Spielberg better be getting royalties for the riffs on E.T., Close Encounters and The Goonies – to the more subtle, like Cujo and Commando.

But playing "Where's Waldo" with 30-year-old flicks isn't sufficient in itself to sustain a show. At times, Stranger Things spins its wheels as characters make illogical choices to tiptoe around plot holes, and the writing occasionally results in some egregiously overwrought performances (I'm looking at you, Veronica Sawyer). But what makes the series so compelling, beyond the atmospheric cinematography and spot-on period production design, is the exceptionally appealing cast – particularly its youngest actors – who ground the story in its time while simultaneously making it accessible for today's viewer.

The exact same thing could be said about I Love My Wife, the 1977 Michael Stewart–Cy Coleman Broadway musical currently running at Winter Park Playhouse through Aug. 21. Alvin (Shawn Kilgore), a blue-collar New Jerseyan, is faithful to his loving wife, Cleo (Natalie Cordone), but feels like he was left out of the sexual revolution. His more-sophisticated pal Wally (Michael Colavolpe) encourages him to experiment with "multiple love," leading to an awkward Christmas Eve foursome with Wally and his wife, Monica (Heather Alexander). It all plays like a musical episode of Three's Company, with peppy (if instantly forgettable) ditties about threesomes, hashish and personal ads.

The Playhouse is known for presenting genial productions geared to their Baby Boomer clientele, so this risqué play about wife-swapping may be one of the riskier selections in their history.

Nevertheless, don't expect The Ice Storm: The Musical; this lighthearted lark elicited more knowing snickers than offended gasps from its aging audience, some of whom probably remember the swinging era first-hand.

But even though the bed-hopping is played for laughs, there's no denying how dated the gender norms on display are: The women have virtually zero character development or agency, the men are so resolutely cis-het you'll suspect they're closeted, and the obvious subtext of class and power imbalance is entirely ignored.

I Love My Wife is so slight, it's impossible to imagine it filling a Broadway house, but it's a perfect fit for the intimate Winter Park Playhouse. Director Michael Edwards allows the pace to sag, particularly during the slow second act. But he's smartly assembled an excellent cast, led by the ever-effervescent Natalie Cordone, who invests her underwritten role with an honesty absent from the script. Kilgore, her longtime performing partner, pairs effortlessly with her, but it's still a stretch to imagine his nebbishy character stepping out on his beloved.

Colavolpe and Alexander are stuck playing full-on cartoons. As seasoned pros, they deliver on the gags and make choreographer Roy Alan's soft-shoe steps sparkle, but there's no "there" there under their polyester surfaces. Musical director Chris Leavy and his bandmates, who play incidental characters, are also a hoot, especially Ned Wilkinson as Stanley.

The material may be decades past its sell-by date, but thanks to Winter Park Playhouse's ensemble, I Love My Wife still smells fresh enough to swallow.