"No One Remembers How to Think These Thoughts," by Justin Duerr 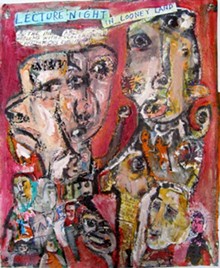 Mount Dora's quaint Victorian aura has not escaped the touch of modernity, as the city undergoes a full-blown streetscape renovation. As if the I-4 Ultimate Project were some kind of contagious disease, Mount Dora too is afflicted with torn-up sidewalks, barricades and detour signs run amok, bringing us a newer, smoother antique and gallery hideaway in pretty Lake County. Raw and Ardor, a new exhibit at the Mount Dora Center for the Arts, is worth braving the chaos, as it brings startling, passionate art out of very unlikely places.

"I ended up teaching in homeless shelters, mental health centers, you name it," artist and collector Robert Bullock told us in a short interview. Bullock is the founder of Coalition Ingénu Self Taught Artists Collective, a nonprofit dedicated to the promotion of art made by homeless and institutionalized folks without formal art education. "Most of these artists make their work because they are internally compelled to create, not to make money." In Raw and Ardor, Bullock (himself a self-taught muralist and painter) and 10 other CISTAC artists exhibit a range of styles and mediums. Outsider art it may be, but naive art this is not – references to European history, ancient mythology and the contemporary art scene, for example, suffuse these works with message and meaning.

Some is darkly humorous: Michelle Kral's "In My Dreams" shows two couples with a ghost of one wife (possibly) hugging the other unsuspecting husband. David Kime is subtler, using colorful collage to make pieces like "Mr. Big Head," a green starry-faced portrait that perfectly nails the clueless bosses we've all had (look for the question mark), and a series of mythological beasts constructed of melted crayons and Barbie-doll parts. Bullock contributes a series of crude yet sophisticated earth-tone portraits, many of his own alter ego, "Small Boy," a naked prehensile boy ready to bite. He'll jump off the canvas if you let him.

Kime has been often reviewed in the art press, as has Coalition Ingénu's perhaps best-known member, Justin Duerr, who was part of the award-winning Sundance documentary Resurrect Dead: The Mystery of the Toynbee Tiles. Duerr's incredibly meticulous line drawings are epic narratives; "No One Remembers How to Think These Thoughts," a swirling geometric pattern, is like an illuminated tapestry of the subconscious. Duerr's complex inner world compelled him to pursue the creator of the legendary Toynbee Tiles; his obsession with finding the creator(s)' identity makes Resurrect Dead an enthralling watch. His own drawings are more contemplative, less cryptic, but completely original and deep.

In the overwrought star system of the wider gallery/museum scene, Raw and Ardor is refreshing. The art expresses an individual struggle to make sense out of a difficult world, seeking meaning rather than outside acclaim. There's a thin line between madness and creativity, and Bullock and his Coalition Ingénu pull you across it to the other side.

« 13 ways of looking at a flag: A post-mortem of “The Confederate Flag: A Belated Burial in Florida”   |   Speakeasy, Orlando’s oldest spoken word open mic, closes down after 13 years »