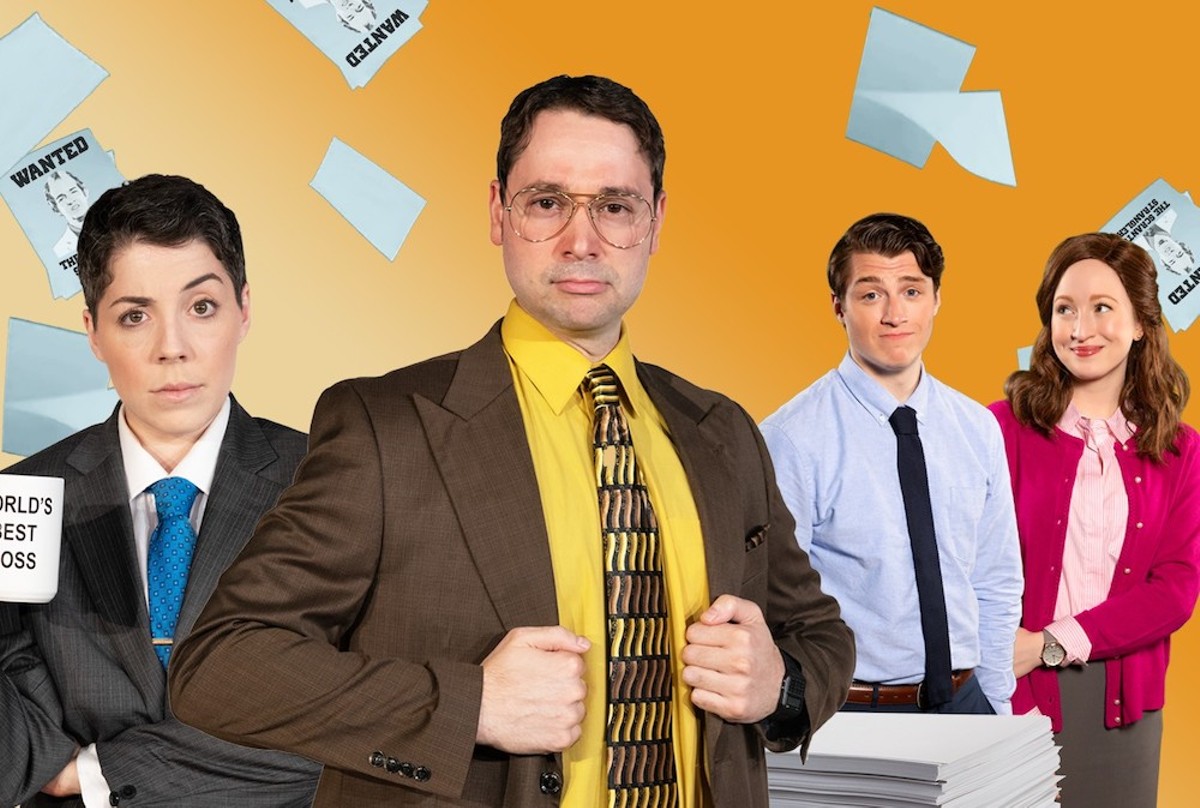 image via the Abbey

'The Office! A Murder Mystery Parody: Who Is the Scranton Strangler?'

The pandemic may have paralyzed most performing arts, but it's proved a boon for two diametrically opposed forms of entertainment: binge-watching streaming sitcoms at home and site-specific outdoor plays. Starting this week and running through April 11, the Abbey hosts the Orlando premiere of a new touring production that cannily combines both genres into The Office! A Murder Mystery Parody: Who Is the Scranton Strangler?. I recently interviewed writer-directors Bob and Tobly McSmith, whose previous pop-culture musical parodies have played New York and Las Vegas, about their efforts to get audiences off the couch and on a socially distanced hunt for the Scranton Strangler.

How did your partnership begin?

Bob McSmith: Almost 20 years ago [we] moved into the same apartment on the same day. ... it was a two-bedroom, four-person apartment in Park Slope ... It was a very tiny railroad apartment, and initially we bonded over just escaping that space.

We'd both just kind of moved to New York, and we liked musicals, but creating them felt not accessible to us because we were just getting our start. So we came up with the idea for a Saved by the Bell musical, and we just kind of did it in a bar 17 years ago. And we've just grown from there into all the parodies we have today.

What helped you make the transition from Off-Off-Broadway to national tours and Vegas hotels?

BM: We always wanted to make theater for people like us who really didn't like it, or didn't get it, and we wanted to create this opening for people to start to understand it.

TM: It was just hard work, and we just stuck with it and we believed in what we were doing. We wanted to make people laugh. That was our No. 1 goal; to have people enjoy themselves with parodies, since it's nostalgia, which is something we all need right now. We've gone through almost everything; we've lost a lot of money, we've made some money, we've learned a lot about theater in the years, but we never gave up.

How do you select the subjects of your parodies?

TM: When deciding which parody to do, it's got to be something that we love. It's got to be something that was formative to us in our teen years, like Saved by the Bell and 90210, or in our later years like The Office and Friends; things that had impact on us, but also stuff that we can make commentary on and lovingly make fun of. ... We've been working in offices for years trying to keep paying rent in New York, and so [The Office] really spoke to us.

Why turn The Office into a murder mystery?

TM: Our Office show had run in New York for almost two years and was on a tour around the U.S., and it got shut down in last March because the pandemic. We had to re-look at what theater was when we couldn't do it in a theater. We were working with our producers who were doing these walking tours, and we thought murder mysteries are so popular, and true crime.

BM: This is our first-ever walking tour mystery. I love true crime; I fall asleep every night to Forensic Files, which is a little creepy but I find it very soothing. It was a completely new format for us, that we've been learning as we're going.

How have the creators behind the shows you've parodied reacted?

BM: We've never gotten much pushback; we've been very lucky. The only one who ever did was Andrew Lloyd Webber, who sent us a cease and desist over our Cats parody Katdashians, which was hilarious. ... Honestly, we've gotten so much support from the actors and creators. Jeff Franklin [the creator of Full House] came to see that parody and told us we knew more about Full House than him.

What was it like casting the late Dustin "Screech" Diamond in your Saved by the Bell musical?

TM: Getting to like see him and write jokes for him was so impactful to us. It really really felt like this childhood dream coming true.

BM: He came in and played himself as a janitor at Bayside, still hanging out, interacting with this younger version of himself, giving him horrible life advice. He was so game for anything; he was absolutely willing to make fun of himself. It's such a sad loss.

TM: We're directing this and we're casting it locally, so we've been doing auditions over Zoom, we're doing rehearsals over Zoom ... In this brave new world of everything going virtual, we're excited for the challenge of it and to see what happens.

BM: The actors are not backstage together; they're all handling their own equipment, zipping up their own wardrobe, spraying it, putting their props away. So they're the only ones touching or interacting with their equipment. It's all socially distanced, masks on everyone; we are really going above and beyond on safety just in case.

TM: It's a way to get out of the house and do something to take your mind off of everything that's going on. That's why we love nostalgia, because it's a safe place to go, [and] we love to provide that feeling to everybody, that they're going to feel good and warm and have a distraction for an hour and a half.

(The Office! A Murder Mystery Parody: Who Is the Scranton Strangler? runs through April 11. The walking tour takes groups of up to 30 people through Thornton Park, departing from the Abbey, abbeyorlando.com; $45.)