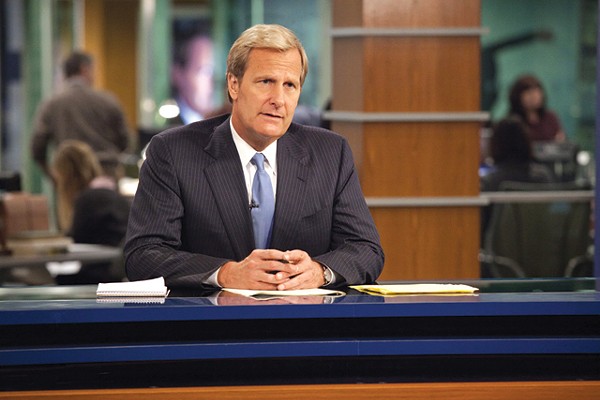 In the first minutes of creator Aaron Sorkin's new show, The Newsroom, which premiered on HBO this weekend, news anchor Will McAvoy (Jeff Daniels) is asked to respond to the public perception of him as "the Jay Leno of cable news" – code for middle-of-the-road, unchallenging affability. Shortly thereafter, McAvoy launches into a Paddy Chayefsky-worthy tirade – aimed at a blank-faced, incurious college student – that's supposed to demonstrate his newly discovered inner fire, which, when paired with an idealistic executive producer (and former flame) Mackenzie MacHale (Emily Mortimer), will ignite his return to old-fashioned journalism in the mold of Edward R. Murrow and Walter Cronkite.

What McAvoy and Sorkin both must surely know (and, if not, they could be thoroughly debriefed by David Letterman, Conan O'Brien, Sorkin's friend Keith Olbermann or even Jon Stewart) is that Leno, like Sarah Palin, is the ultimate rubber/glue figure: Attack either one and you will know the awesome power of no-win blowback.

Despite an entire B-story devoted to just that phenomenon with regards to Palin, who is just one of many real-life errant quotables employed by McAvoy in a later episode to prove a point about bottom-feeding journalism, The Newsroom seems oblivious to its own middle-of-the-road affability. From its bombastic opening credits and swelling score to the trademark Sorkin rat-a-tat dialogue to the young, overworked-but-brilliant producers having sex with their bras and briefs on, The Newsroom is most shocking for its home network: HBO.

The pilot episode, titled "We Just Decided To," crackles with possibility and suspense, but the next few hours, scheduled through mid-July, undo nearly all of it. Like Sorkin's short-lived Studio 60 on the Sunset Strip, which actually should have aired on HBO in the first place, the two leads begin the show having had an epic falling-out, the source of which is a mystery … until the second episode, where it plops with a mild thud. Subsequent shows shove the supposedly revolutionary MacHale way into the background while we learn more about McAvoy's insufferable way with women; a love triangle with standout Alison Pill at the center is drained of any mystery in the pilot with an interminable scene in which MacHale explains exactly how it will end. If she's nearly as keen as The Newsroom claims she is, then she's just spoiled the show's only relatable human touch.

By the fourth episode, "I'll Try to Fix You" (and if that title alone doesn't tell you how utterly network, how Leno, the enterprise truly is, then you might love this show), McAvoy's show-within-the-show has settled into a bland Lawrence O'Donnell-style bloviation hour. We're expected to believe this show is changing how news is done, while one researcher (Dev Patel) goes on about the existence of Bigfoot and his team debates whether to run with the other cable outlets' declaration that a political figure has been killed. They don't; the person lives; they all pat themselves on the back to the soaring vanilla chimes of Coldplay. And call me crazy, but I think I heard Leno's high-pitched cackle in the distance as the credits rolled.