The Cave Singers on their storied origins and timeless folk tales 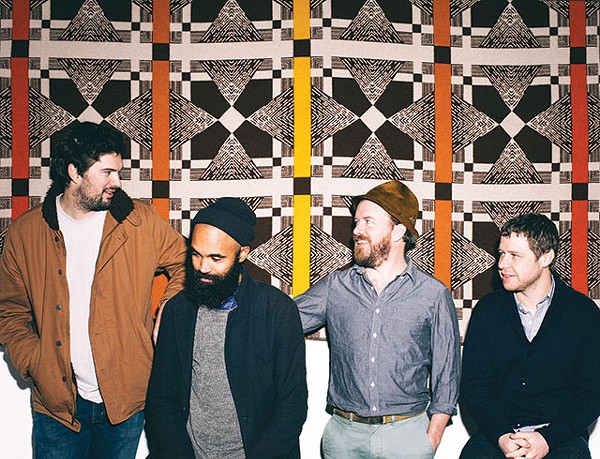 THE CAVE SINGERS with the Devil Makes Three

If anything’s a good omen for a band’s long-term health, it’s one of its members alluding to candy while discussing how the group was formed. Such is the case with the Cave Singers, whose lead singer, Pete Quirk, compares the indie-folk outfit’s creation to “how Reese’s Peanut Butter Cups got made.” In 2006, Quirk moved into a Capitol Hill house in Seattle that was shared by guitarist Derek Fudesco, best known for his post-punk outfit Pretty Girls Make Graves. On one side of the house, Quirk made minimal, “weird” folk music using an acoustic guitar and a bunch of effects. On another, Fudesco was writing instrumental music for his friend’s indie movie.

The chocolate and peanut butter of their styles collided after the pair developed a friendship. Fudesco once ran a small label that released work from Quirk’s old band, Hint Hint, but they knew little else of each other until they started living together. One night, Fudesco was penning a song and offered Quirk the chance to sing on it, which Quirk accepted. The result was the spare, rustic “Belmar.” “That’s the first Cave Singers song, but we didn’t even know what it was,” Quirk, 39, says. “We were just like, ‘Oh, that sounds cool. Should we do another one?’”

Now a four-piece, the group has released four full-lengths as of 2013’s Naomi. When it came to finding an audience, the Singers launched with impeccable timing. Folk rock and indie rock have been bedfellows since the 1990s, thanks to musicians like Elliott Smith, and that connection reached another peak in the 2000s as Fleet Foxes, Bon Iver, Sufjan Stevens and others really found their footing. Quirk credits indie-folk’s second rise to the timeless appeal of quality storytelling. “I feel like folk music – Bon Iver, for instance – is just honest, heartfelt, beautiful music. That could come out any time, and it wouldn’t matter what was going on,” he says. “If that came out when hair metal was big, it would probably still do well because it’s just good.”

The Singers’ placid, cozy and measured music reminds you why this school of sound became so beloved by audiences. For Quirk, aesthetic values like purity, warmth and honesty are most crucial to his band – especially the latter. “We want to be real. We want to be down to earth,” he says. In his music’s context, “honest” translates to “vulnerable” as much as “forthcoming.” As evidenced by the sensible, sensitive Naomi, the Cave Singers’ lyrics are both conversational and phrased with pointed care. Take this passage from “Karen’s Car,” which concerns growing up and moving on from old relationships: “Here we are, man, lost again/Karen’s car, yeah, man, it’s my only friend/Stuck in her world, trying to make a change/Then in love, but I know we will split again/Yes, we will.” Quirk’s vocals also reflect the power of poetic frankness.

Since that fateful first tune, the Singers have become Quirk’s life, as he reinvigorates and alters the music consistently enough to keep it feeling fresh. Since their beginning is spelled out in great detail, it’s natural to wonder: Has he ever contemplated the end? “I don’t really think about it. I’m a pretty big proponent of trying to stay in the present moment, so that’s where I want to live,” he says, “but I hope the Cave Singers goes on for a while ’cause I love doing it.”

« His Name Is Alive nails it with richly told rock opera   |   This Little Underground: Me Chinese’s CMJ controversy »