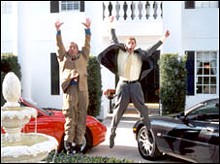 Jerry Eisinger is one of the guys who you always imagine wearing a suit. Red-headed, fresh-faced and quick with a handshake, he has the ingratiating mien of the world's oldest Eagle Scout. His partner and foil, Mark Ferrera, is just as magnetic a personality, albeit of a shorter, darker and more balding variety. (Imagine a genetic cross-breeding of Stanley Tucci and Danny DeVito in which only the positive attributes have surfaced.)

Between them, these two have enough charisma to sell ice to polar bears. They've proved it on stage, where they've brought actorly electricity to outings like Trilemma Productions' 2001 production of Roger Rueff's "Hospitality Suite" and Loyal Opposition Productions' recent staging of the original drama "Worlds Apart." They've proved it on the radio, having served for six months as the playfully parrying co-hosts of WORL-AM's "The Film Guyz," a weekly chat-in that championed the cause of local film production. More recently, Eisinger and Ferrera have taken their buddy-buddy act to the screen via their own feature, "Stealing God" (www.stealinggodthemovie.com), an ambitious independent comedy that was shot in greater Orlando and is now making the rounds of investors, festival programmers and potential distributors.

Written by Eisinger and produced by the duo, "Stealing God" casts them as struggling actors who hit on a sure-fire scheme to get rich quick. They establish their own TV ministry, a cable-supported bully pulpit from which they can solicit donations to their favorite charity: themselves. Just as these shamanic charlatans charm their way into their viewers' wallets, the movie presents born salesmen Eisinger and Ferrera with two of their stiffest challenges yet: demonstrating that the post- "Hollywood East" Orlando can still produce cinematic projects worthy of national attention; and finding something interesting to say on the well-worn subject of televangelism, a topic that hasn't been cutting-edge since it became an Ozzy Osbourne lyric in 1988. ("Miracle Man." "No Rest for the Wicked." Trust us.)

Eisinger agrees that taking aim at TV Bible-thumpers is, to coin a phrase, like shooting the sign of the fish in a barrel.

"They're kind of an easy target in a lot of ways, because what we see is often so outrageous," he says. "`But` at the beginning stages, we just wanted to make a good comedy, and I thought that was a strong premise. I probably had too much to drink one night, was flipping around `the dial` and I caught the idea."

The Eagle Scout a closet tippler? It's that sort of whoopie-cushion dichotomy that makes "Stealing God" work more often than not. There's nothing like the sight of Eisinger's character, Bryan Anderson, staring intently into the TV camera and barely suppressing his hysterics as partner Morris Jeffries (Ferrera) gradually realizes that his heavenly co-host is stoned out of his gourd. The movie is full of moments like these, gags that sound pancake-flat on the page but spring to life when enacted by Eisinger and Ferrera, a comedy team you simply can't stop watching.

That the finished movie reflects its stars' energies is largely thanks to director Dave Swuz, a finance-student-turned-filmmaker who had shot numerous music clips before breaking into features with 1995's "D Minus." One of the few young directors who insists on shooting on film instead of video, Swuz brought an additional asset to the project: One of his business partners owns an Avid editing suite, the extensive use of which helped to lend the low-budget "Stealing God" its visual elegance. Overall, it's one of the more accomplished-looking pictures to come out of Orlando since "The Blair Witch Project."

Just as noteworthy as the film's professional sheen, though, is its attempt to stake out a creative terrain between wild comedy and inspirational drama. Bryan and Morris face a moral crisis when they realize that much of the money pouring into their fake ministry is coming from poorer members of the community. The resulting tug-of-war between avarice and conscience amounts to a restatement of that familiar question, What Would Jesus Do? One wonders if the film doesn't actually represent a stealthy new subgenre of Christian cinema, one that uses weed jokes to get its message to the masses.

Eisinger demurs from the association -- his relationship to organized religion is something he prefers to keep private. Ferrera, in contrast, fairly leaps at the subject.

"I do have a Christian faith," he says. "And I think it's really interesting to explore some of the hypocrisy in the church -- why something that purports to help people causes so much damage, anger, resentment and hate. It's not really blasphemous. It's not degrading Christ or God. It's putting a light on religion and what that does to people sometimes."

If their approaches to the issue are divergent, so are their backgrounds. Eisinger, 32, is a Michigan-born boy whose r?sum? is heavily weighted to broadcast news, stand-up comedy and performance work at the Orlando attractions. Ferrera is 10 years older, San Franciscan by birth and a veteran of 20 years' worth of theatrical productions in New York, Pennsylvania, Minnesota, California and Florida.

It's significant, however, that their professional relationship flourished through their work with Trilemma, an outwardly secular theater group formed around the shared religious beliefs of co-founders Jim Morris and Heather Avery Clyde, and which sought to explore larger truths in ways that would remain attractive to the layman. Morris, now the executive director of the Central Florida Theatre Alliance, thus knows the risk "Stealing God" represents.

"You're in this strange world where you could piss off one side of the camp and totally be irrelevant to the other side," he says.

That the movie doesn't always reconcile these snarky and saintly aspects of its personality is one of its few real failings: The dewy, sentimental soliloquies sometimes seem to have been plucked from an entirely different movie than the one-liners about genital warts. But the effort, as they say, is valiant. And to the business heads who see the film, any tonal discrepancies are going to be a minor concern amid their discovery of an all-purpose comedy team that's just waiting to be inserted into a big-studio project. The possibilities are endless: Jerry and Mark on the campaign trail! Jerry and Mark in space! Just remember us when you're on the road to Mandalay, huh, Film Guyz?

Ferrera, for one, hopes to funnel any such good luck back into the community.

"It would be nice to stay here and do some stuff -- to make some money for people, and maybe be seen," he says. "Who knows if that's realistic or not?"