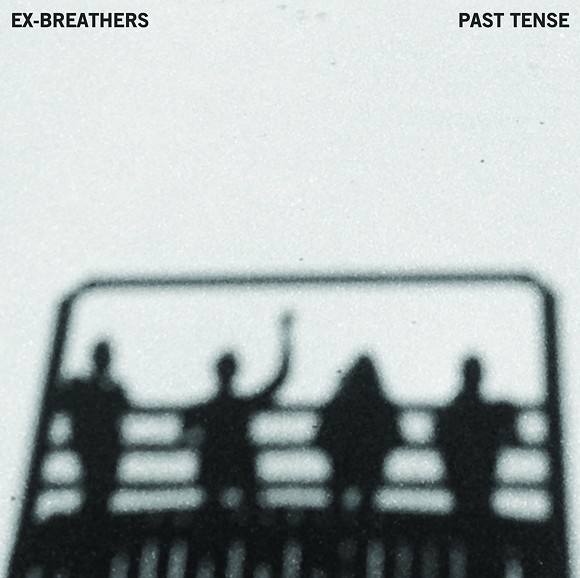 The careening explosiveness at the heart of Tallahassee's Ex-Breathers' hardcore is its necessarily defining feature. While some may have thought the whirlwind attack of their ExBx 7-inch from last fall (12 songs in 11 minutes) may have seemed like a gimmick, the truth is that this is a band that has a lot to say and isn't wasting any fucking time saying it.

For Past Tense the band slows their roll a little bit – these 11 songs average around two minutes apiece – but there are certainly no fewer ideas here. In fact, most of the songs here each jam in about five songs' worth of tempo changes, guitar tonalities, and vocal approaches. The record definitely starts with what seems like moderation: "Blank" is relatively dirgey, with a low-end rumble and a stop-start attack that blooms into a propulsive, dynamic, and highly focused attack that's at odds with the fuzzy, monochromatic cover image that fronts the record.

From there, the record turns into an unapologetic attack on simplicity, complacency, and predictability. "Static Machines" teeters on time-signature collapse, with a shouty and off-time anthem of a "chorus" (that is never repeated), "Existing to Remain" is a beautiful throwback to hardcore classicism that gets so wrapped up in the half-dozen different directions it's pulling the listener in that it actually falls apart, cutting the final verse off mid-word. Even when attempting something approaching punk-rock normalcy – the relatively direct and accessible (and bruisingly powerful) "Wired World" – the band can't help but squeeze in a few radically different tempos.

What's most refreshing about Ex-Breathers' approach is that all this complexity is delivered in a remarkably direct way; this isn't a band trying to show off their instrumental proficiency or attempting to make some sort of "prog-punk" for music school nerds. The garden in which this band grows is one fertilized with the shit and bones of a billion dead D.C. hardcore bands, the basslines of a half-dozen Nomeansno albums, and the deep-throated ghost of David Yow's voice. Past Tense is pure hardcore in the best sense, in that takes seriously the core principles of prime-era hardcore and its true descendants: be forecful, be energetic, be aggressive, and be unafraid to put all your ideas out on the table at once.

« Our picks for great debuts and necessary listens from 2014