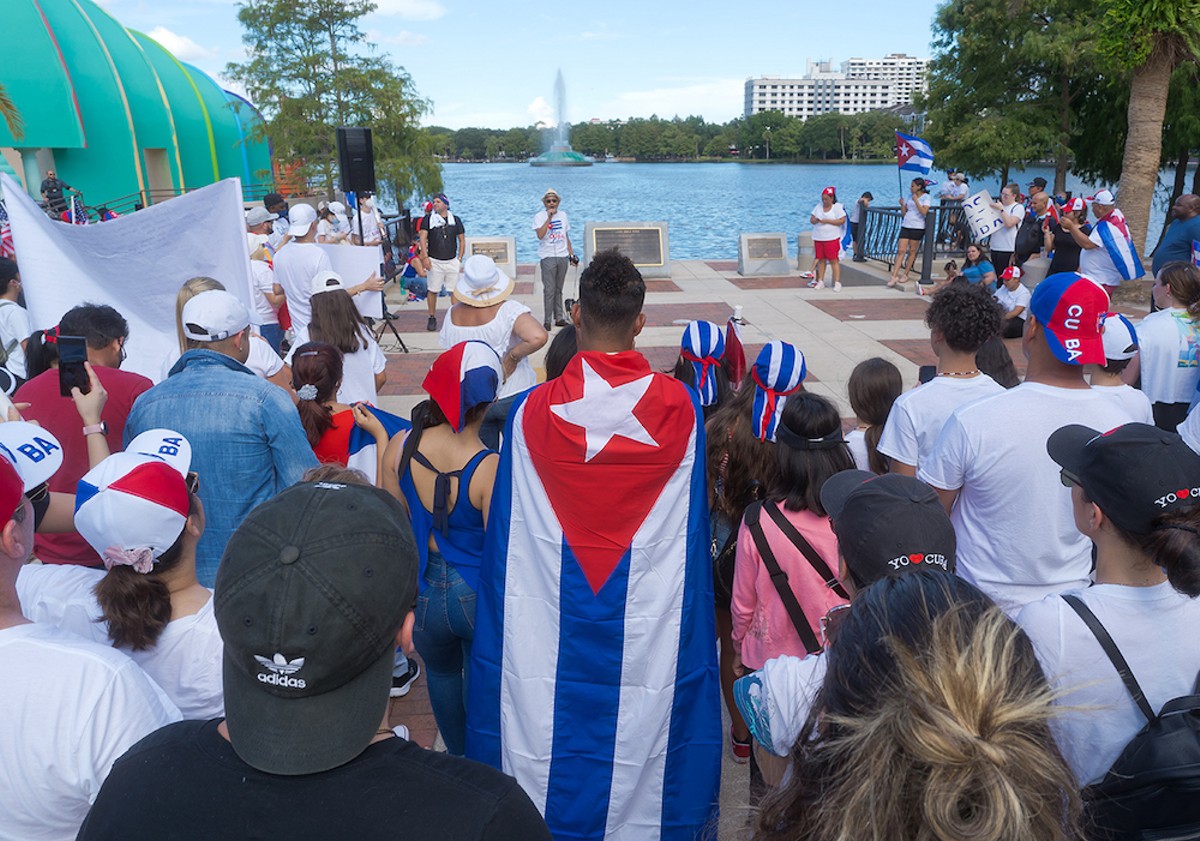 Nearly three months after signing a highly contested law cracking down on violent protests, Gov. Ron DeSantis went all in this week in support of people blocking roads in major Florida cities to show solidarity with an explosion of protests in Cuba.

In Orlando, hundreds of protesters blocked part of Semoran Boulevard near Curry Ford Road for about an hour. Police forced them onto the sidewalk, and one person was arrested for unlawful assembly, said the Orlando police public information officer.

Cubans are "rebelling against a communist dictatorship," DeSantis said during a roundtable at the American Museum of the Cuban Diaspora in Miami last Tuesday. The event was partially closed to the media.

DeSantis' support for Cubans and their allies drew questions from reporters about a new law — one of the Republican governor's top legislative priorities — that creates a host of new crimes and enhances existing penalties related to protests, including a provision prohibiting the "willful obstruction" of streets and highways.

At the roundtable, the governor was asked if protesters expressing support for Cubans — specifically, the march on the Palmetto Expressway in Miami-Dade County — should be arrested, under the state's new anti-riot law.

But he said the rallies taking place since the weekend differ from violent protests that broke out throughout the nation following last year's death of George Floyd, a Black Minneapolis man who died after a white police officer knelt on his neck for more than nine minutes.

The protests about Cuba are "designed to be peaceful," DeSantis said.

"They are trying to end the regime," he added. "And so that is fundamentally different than what we saw last summer, where people were burning down buildings — and this fortunately wasn't happening in Florida to any large extent — burning down buildings, looting, breaking windows, targeting law enforcement and all those things. And so I think that people understand the difference between going out and peacefully assembling, which is obviously people's constitutional right, and attacking other people or burning down buildings or dragging people out of a car and doing that. So, they're much different situations."

DeSantis' comments drew harsh criticism from Democrats, including those who opposed the "Combatting Public Disorder Act" the governor signed into law on April 19. The law creates a new felony crime of "aggravated rioting," prohibits municipalities from impeding law enforcement actions to protect persons and property during a riot or unlawful assembly, and puts restrictions on how a local government can reduce the budget for law enforcement.

Black Democrats, who strenuously objected to the measure, which they assert is rooted in racism and evocative of Jim Crow-era laws targeting Black people, were quick to compare the state's handling of protests in support of the Cuban people with the governor's framing of the need for the new law following last year's protests.

"@GovRonDeSantis made blocking roads during a protest illegal, but he's 100% cool with this because it's Cuban-Americans protesting communism, not Black people protesting police violence," tweeted Rep. Omari Hardy, D-West Palm Beach, last Tuesday. "Anti-protest laws are meant to be enforced against Black people only, of course."

State Sen. Shevrin Jones, D-West Park, blasted DeSantis and his allies for "applying a politically-driven double standard when it comes to the right to peacefully protest and exercise free speech."

"The blatant hypocrisy from the governor and republican lawmakers is deeply disturbing and only increases the urgency for the people and leaders at every level to keep confronting the misinformation and injustices needed to build safer, healthier communities for ALL Floridians," he said in a prepared statement.

A coalition of groups, including the Dream Defenders and the Florida State Conference of the NAACP, are challenging the law in court.

Senate Democrats last Wednesday said they were pleased the anti-riot law hasn't been "weaponized" against those protesting on behalf of Cuban people, but asked Attorney General Ashley Moody for guidance on how the law should be applied.

"We believe it is critical for every Floridian to be treated equally, and since we've seen peaceful protests emerge across various municipalities and local governments — many spilling onto state roadways — it's critical that elected officials and Floridians alike have clarity from your perspective as Florida's chief legal officer as it relates to the new statute," the caucus wrote to Moody last Wednesday.

But DeSantis spokeswoman Christina Pushaw lashed out at his critics.

"Florida Democrats and media are so mad that the Governor didn't personally drive down and arrest people for protesting against the communist regime in Cuba. When did liberals become such authoritarians?" she tweeted.