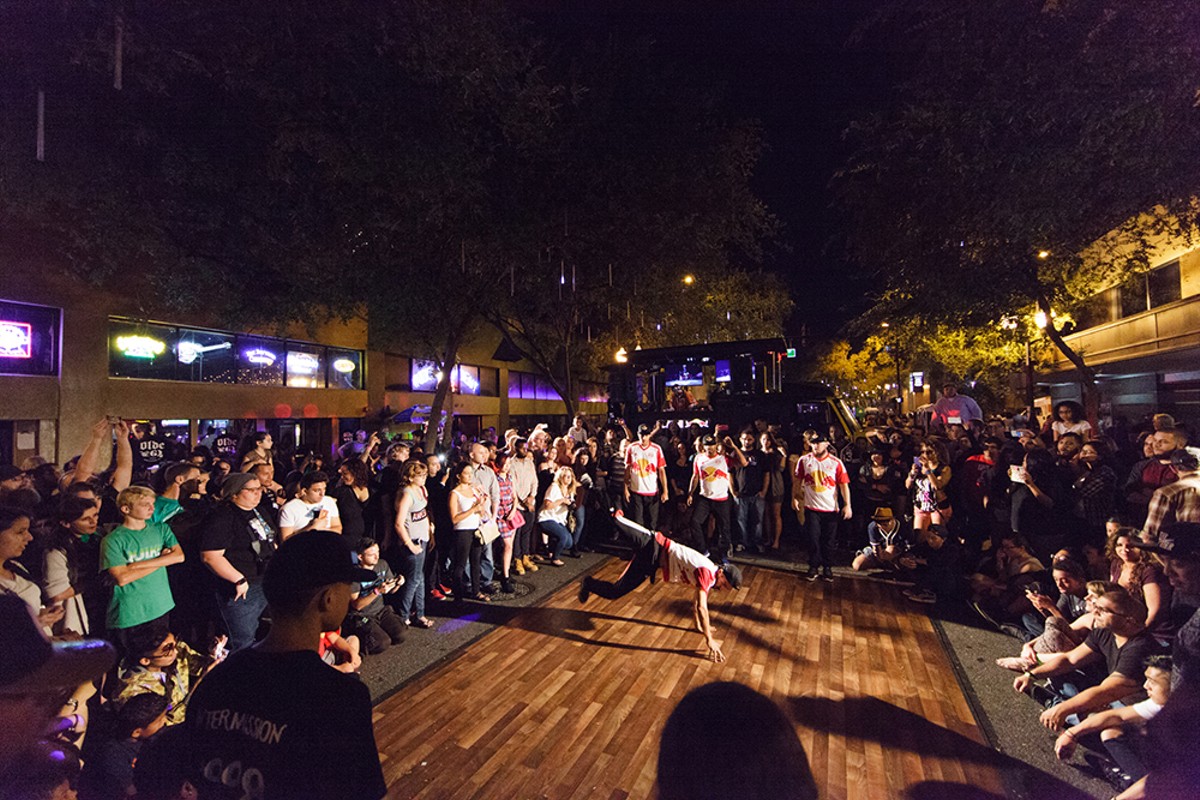 Red Bull BC One Breakdancers

Cole NeSmith is often described as relentlessly positive – not a terrible criticism to sustain, of course – but he does find one fault with Creative City Project, the event he founded five years ago: He'd like to see more rapid growth. "My dreams are often in conflict with my patience," he admits.

The fifth iteration of the multimedia arts event is Saturday, Oct. 15, when a thousand dancers, musicians, acrobats, painters and artists of all stripes take over downtown Orlando from 5 to 11 p.m. Despite NeSmith's dream/patience conflict, steady growth has been a hallmark of Creative City Project, with a budget that started at $3,000 in 2012 raised to $150,000 this year. And prudent growth has been made just over the past year, albeit in ways attendees may be unaware of – organizational improvements, diversity in offerings and participants and an increase in tourists.

Following grant evaluations, cultural organizations will usually receive feedback on what they did right and what they could do better to perhaps increase the funds they receive. There's a tendency to greet these criticisms with eye-rolling, heavy sighs and speculation on the level of knowledge of each member of the panel. But when Creative City received cultural tourism funding from Orange County Arts & Cultural Affairs, they took one bit of criticism to heart: that it lacked organizational structure.

NeSmith spent the first six months of the year working with his team to better define their roles, build a strong board and create a panel of "event chairs" curated from various fields.

"I met Cole and was immediately inspired by him," said Kelly Cohen, a partner in lobbying firm Southern Strategy Group and a Creative City board member. "He invited me to Creative City in 2015 and I was in awe of the entire event, the large and diverse community turnout and how much he had accomplished with a small group and limited resources. I strongly believed in Cole's vision to create a signature event in downtown Orlando that united arts, culture and community and knew I wanted to be a larger part of his team."

Creative City reports this year's ticket reservations show an increase in out-of-state interest, which they attribute in part to participation by artists such as Nashville's Radial Conservatory. This group of musicians and visual artists collaborates to create immersive concert experiences with meditative long-form music. (The curious can get a peek into their process in a TEDxNashville presentation you can find on their site, theradialconservatory.com.) It's hard to watch their stuff and not get excited about the potential of our cities' art scenes influencing one another.

Orlando's burgeoning mural scene will get some love during the festival when four local artists paint murals live on temporary walls for Orlando City Soccer. Festival-goers will vote on the murals, and the top two vote-getters will each get to paint a 40 foot-by-70 foot mural in the new downtown stadium. Additional murals will be created by artists such as the multi-talented Heps Fury, who will also dance with the Red Bull BC One B-Boys.

While organizers credit the arts community in general for the diversity reflected in the festival, it is something they appear to have achieved organically. In addition to the hip-hop contributions of the Red Bull breakers, the event will also feature Orlando Ballet, Voci Dance, Coby Project and the high-energy dance crew MOTIV, led by Marlee Hightower. A chance meeting during Beautiful Together, a performance in response to the Pulse shooting, led to Creative City programming director Holly Harris bringing in musicians from the Asian Cultural Association for the first time.

"The fact that Creative City Project was started by people in the community, independently, who cared enough about Orlando to realize the vision for something like this is how anything good ever gets done," says performance artist Brian Feldman. "I have no doubt there will be attendees of this year's event who get inspired enough to make more great things happen."

Now living in D.C., Feldman returns to his hometown with The Skill Crane Kid. A performance piece inspired by a 2004 news story in which a boy from Sheboygan, Wisconsin, got himself stuck inside a skill crane arcade game, Skill Crane Kid allows the public to try to win prizes while Feldman is trapped inside the machine for six hours. (Don't forget your quarters!) He reckons this stint will be a breeze since the first time he did the piece in 2011, at Stardust Video & Coffee, it lasted 16 hours.

"Of my 110-plus projects, I really think that The Skill Crane Kid is the most fun. At least, for the audience. For me, it's a great challenge that requires me to fast Yom Kippur-style," Feldman says.

The 2016 edition of Creative City Project is expected to attract more than 10,000 people to the downtown area. NeSmith may have come to terms with his impatience over the growth process, but he says if Creative City had a $100 million festival budget, organizers would be thinking about what a $200 million festival would look like. It's just their nature to want to improve, which makes the event itself a breathing work of art.