Snap Space hosts a communion with Chuck Stewart, the quiet master chronicler of the jazz world

You might not know you know him, but you know him. Chuck Stewart's photographs adorn the covers of at least 2,000 albums, by his count. That's his work on Albert Ayler's Love Cry, Gil Scott-Heron's The Revolution Will Not Be Televised, Art Blakey & the Jazz Messengers' Three Blind Mice.

And so, although he's a visual artist, it's music fans who know him best. Over the span of a 70-year career, Stewart shot photos of Marian Anderson when he was just 13; atom bomb tests as an Army Signal Corps photographer; and actors, comedians, pro athletes and art nudes, but it was his work in the jazz world that dominated both his career and his reputation. And now an exhibition of his work is coming to Orlando's Snap Space gallery, Eye of an Era: The Legacy of Chuck Stewart, opening Friday, April 26.

Bucking the trend of splashy, electrifying artist portraits, Stewart captured musicians in intimate and introspective moments. In Stewart's 2017 obituary in the New York Times, jazz historian Dan Morgenstern was quoted saying that photogs weren't always welcome in the recording studio, but Stewart was.

"Producers and engineers accepted him," Morgenstern said. "He was not the least bit intrusive. He would never snap a shutter in the middle of a take. He was the extreme opposite of the paparazzi."

Most famously, Stewart was in the studio with John Coltrane during the recording of A Love Supreme and Ascension. The images he made during these sessions are so meditative, so understated, that it's hard to remember a photographer is present – were it not for the technical perfection of the lighting and composition.

"When Chuck passed away I really wanted to make sure his legacy was known to people, because he's done such incredible stuff," says local jazz broadcaster Kyle Eagle. (Check out his show, The Major Scale, on WUCF.)

"He captured jazz in a way that no one else did. ... His Coltrane images are absolutely naked." 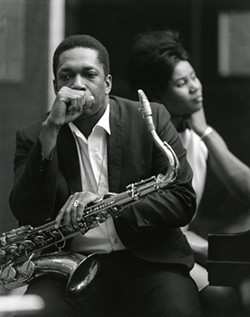 Eagle knew Stewart from back when they both lived in Teaneck, New Jersey. They became acquainted when Eagle was working on a documentary about composer and vibraphonist Gary McFarland, and his producer licensed some images of McFarland from Stewart.

Now Eagle has worked with Stewart's family to bring this exhibition to the Snap! gallery. Eagle says, "I've tried to keep the momentum going as much as possible." The prints in this show are among the last Stewart printed himself and signed before his death.

Patrick Kahn, of Snap, says he was familiar with Stewart's iconic photographs of jazz legends. Eagle, the Stewart family, and curators Patrick and Holly Kahn worked together to make the show a reality.

"We love the warmth and rawness of his imagery," Kahn says.

Eye of an Era will present a glimpse of Stewart's advertising work and a selection of his art and issue-oriented photography as well. It will be a rare chance to see the work, since, unusually for a photographer of his magnitude, Stewart never sold his archive to Corbis, Getty or one of the big licensing firms.

Many of his photos documenting the Love Supreme sessions were donated to the Smithsonian National Museum of American History. But this show gives Orlando the opportunity to commune visually with the creators and the chronicler of those wordless aural truths too big to speak.

« A dank guide to talking about getting high   |   Remembering Church Street Station, one of Florida’s biggest tourist attractions »