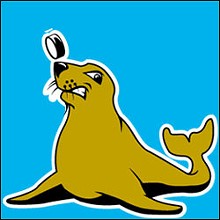 "The City of Orlando has been very disappointed in its experience with the Orlando Seals," Iennaco wrote. But she didn't stop there. The minor-league hockey team, which has leased the TD Waterhouse Centre from the city since forming in 2002, had "breached and defaulted" on its lease agreement, she wrote, and "repeatedly embarrassed the City." Things were so bad, she added, that "continued occupancy of the TD Waterhouse Centre by Orlando Professional Hockey, Inc. and the Orlando Seals will operate to discredit the City."

In other words: Get out.

The breakup began in April when Waronker announced he was dissolving the World Hockey Association II, the league he owns and the league the Seals played in. Waronker said back then that he was moving the team to another league.

Even then the Seals were in a world of trouble. They'd already been in two leagues in two years. Year No. 3 would have brought league No. 3. Then there's the fact that the Seals organization took in some $400,000 less than it spent each year, and owed the city nearly $150,000 in back rent, which the city said would have to be paid before any new lease agreement would be signed. Attendance was pathetic, about 3,000 people per game by the official tab. And the Orlando Centroplex, which runs events at the arena, lost money on Seals games.

On the other hand, the Seals provided low-cost entertainment, which the city liked. So they looked the other way.

But this year, the Seals wanted more. Not only did the team demand a reduction in rent – from about $10,000 a game to $7,500 – and a greater share of the concessions revenues its fans generate, they also wanted to wipe out the outstanding debt. In an awesome display of cojones, the Seals even demanded that the changes be made retroactive to the 2003-2004 season.

In May, Waronker told Orlando Weekly he wasn't playing hardball. "It's out of necessity," he said of the demands. "The status quo is not acceptable." A phone call to his lawyer's office for this story was not returned.

The Seals played down the problems with the city, insisting that everything was OK and that they'd be back in the arena this season. But that wasn't to be. After first threatening the city with legal action following Iennaco's letter – and getting the city's follow-up, which said the city hadn't changed its mind – the Seals announced on Sept. 1 that the team would shut down this season.

The Seals promised to return the next year, but not in the TD Waterhouse Centre. In a statement posted on www.orlandoseals.com, the team vowed to finance the 2005-2006 season by suing the city for lost revenue.

"[The lawsuit], while certainly not the Seals' preference, will enable the Seals to play before the fans of Central Florida in the 2005-2006 season," the statement says.

But fans, or a lack thereof, are the heart of the problem. The Seals claimed they attracted about 3,000 fans per game, a figure the city disputes, and which, even if true, isn't enough for the city to recoup its expenses. Last year, the Centroplex lost about $8,500 per game. And even under a best-case scenario – i.e., boosted attendance, the Seals paying their bills – the Centroplex would only break even, Centroplex officials told Orlando Weekly earlier this year.

"We stepped back and took a look at it," Iennaco says. "We are losing money on this, it doesn't make sense."

Waronker said he was "stunned" by the city's decision to give him the boot. "Coming from a City official, the letter is surprising in how insulting (and inaccurate) the accusations are, it makes one believe the letter might have been written or promoted by others," he wrote in a letter to the city.

Waronker never makes clear who he believes the "others" are. He goes on to say that "our rent is current and we feel we have a very good relationship with the Orlando Centroplex and its Directors."

Moreover, he says, the Seals just posted a nonrefundable $100,000 letter of credit with the Southern Professional Hockey League, a nine-team league the Seals were supposed to join this year. "We are incredibly upset to receive [the city's letter] out of left field, and will demand that the letter be rescinded," Waronker wrote. "As for the City being 'disappointed' with the Orlando Seals, remember that the only championship banner hanging from the rafters of the TD Waterhouse Centre is that of the Seals hockey team."

As a legal matter, the city says it can sever the lease agreement because the contract stipulates that the Seals play in the World Hockey Association II, the developmental league Waronker formed before the 2003-2004 season. He dissolved that league in April.

Waronker's lawyer, Jennifer Eden, disputes the city's allegations. The Southern Professional Hockey League, she said in a letter to Centroplex director William Becker, was a merger of the WHA II and "another league." If the city wanted to cancel the lease based on poor attendance, it should have done it two months earlier, she wrote, noting that Waronker wrote a check to cover his languishing debt for $50,000 May 21 and another one for $46,309.87 on Aug. 2.

Iennaco said that while the city was happy to get some of the money it was owed, it wasn't good enough. "From everything we could discern, the Southern Professional Hockey League is a new entity," she replied to the Seals.

The city would have ended the contract in June based on poor attendance, she adds, but it figured the Seals wouldn't pay the rest of the money they owed.

She did, however, leave the door open just a crack for future negotiations: "[G]iven the abysmal payment history of Orlando Professional Hockey, Inc. and hockey's inability to attract a substantial fan base here in Orlando to date, City staff will require a substantial cash deposit in any contract that it takes to Council for consideration in the future."