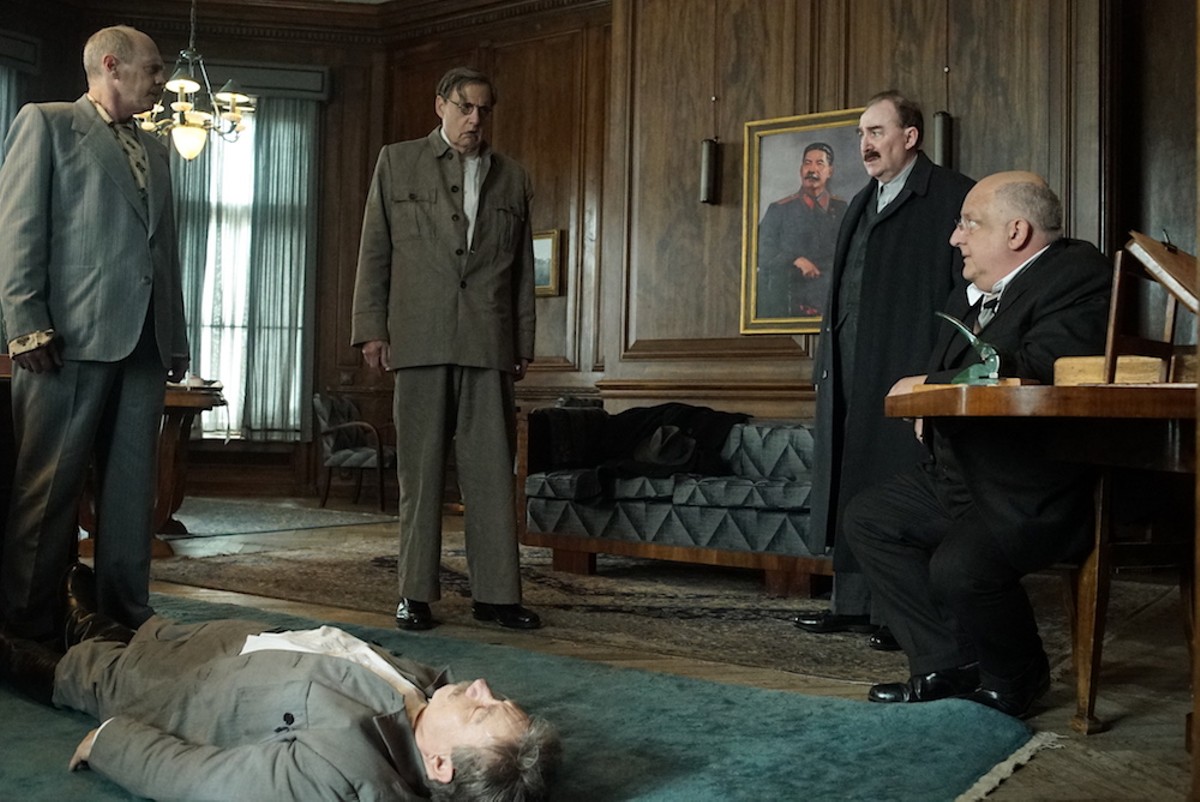 It's been said that satire is obsolete in our current political landscape. Chicanery and buffoonery are held up as virtues in a climate so fractured that we can refer to it as the Cold Civil War with barely a drop of hyperbole. But if satire is dying, then The Death of Stalin, the latest film from Scottish writer-director Armando Iannucci, is a defibrillator, shocking the genre back to life. Based on a French graphic novel by Fabien Nury and Thierry Robin, the film follows the antics of a group of Soviet higher-ups as they jockey for position following the sudden death of Joseph Stalin. And while their constant one-upsmanship is played for laughs, the film makes a very salient and timely point about the dangers of power in the hands of idiots.

When Stalin (Adrian McLoughlin) is incapacitated and eventually dies from a sudden stroke, the members of the Central Committee convene to figure out who will lead the country. This leads to a farce of backbiting, secret deals, public relations disasters and funeral planning for the three central characters: Moscow Party Head Nikita Khrushchev (Steve Buscemi), Deputy General Secretary Georgy Malenkov (Jeffrey Tambor) and NKVD chief Labrentiy Beria (Simon Russell Beale). After the vain, weak-willed Malenkov is installed as the face of the party, Khrushchev and Beria begin sparring to determine who will be the real power behind the throne.

Despite the Soviet setting, the film is far more British in humor and tone. The lack of Boris and Natasha moose-and-squirrel accents is surprising at first, especially in the case of Stalin, who sounds more like a Cockney gangster than a Russian Man of Steel. The shift may take some getting used to for anyone who's watched enough documentaries about the Cold War to criticize Steve Buscemi's physical dissimilarity to the real Nikita Khrushchev, but it serves to humanize these historical figures and dust them off for a modern audience.

Speaking of Buscemi, his performance as the paranoid, scheming Khrushchev may finally net him his first Academy Award nomination. He imbues Khrushchev's arc from put-upon bureaucrat to vengeful manipulator with a sense of palpable desperation that leads to monstrous acts. It's to the film's credit that Buscemi and Iannucci get the audience to somehow root for the man who famously declared to Western ambassadors in 1956, "Whether you like it or not, history is on our side. We will bury you."

The supporting cast is a wealth of talent. Rupert Friend (Homeland) plays Stalin's drunken fuck-up of a son, Vasily, who is intent on delivering a speech at his father's funeral despite his inability to stay sober. His younger sister, Svetlana (Andrea Riseborough, Battle of the Sexes), turns out to be a shrewd political navigator, using public sympathy to her own ends against Beria and Khrushchev. Monty Python's Michael Palin plays Foreign Minister Vyacheslav Molotov – a bureaucrat so permeated by Stalinist thinking that he has trouble rejoicing when his wife is released from years of confinement in a political prison. And Jason Isaacs (Star Trek: Discovery) steals every scene in which he appears as the bombastic Field Marshal Georgy Zhukov, commander of the Red Army.

While The Death of Stalin is a tremendously successful comedy, attention has to be paid to the margins of the film. The effects of the central characters' vanity, ambition and stupidity have very real consequences for the people who live in the world they dominate. Nightly raids result in executions and rape. Marching mourners are executed by jumpy NKVD agents. Domestic workers are led to their implied incarceration or death solely because of where they happen to work. The message of the film is that while the political circus – especially when dominated by buffoons and charlatans – is entertaining to watch, it has very real and very terrible consequences for those around it. It's a lesson that currently we seem determined to avoid.