In practically every neighborhood in Orlando, you'll find a Chinese restaurant feeding residents' pangs for kung pao chicken, pork-fried rice or beef lo mein. Such restaurants garner little to no fanfare; like fast-food joints, they occupy the lower rungs of gastronomic options. So when Panda Bistro opened its doors on the Colonial'Alafaya corridor, it seemed like no big deal. But then I realized the appealing eatery is the brainchild of Maggie Lee, proprietress of Winter Park's Tatáme. I've always liked Lee's tea-and-sake house, but wouldn't go there if I were craving a meal to accompany my lychee-infused sake. So naturally, I was stoked at the prospect of dining at a Maggie Lee'branded restaurant. At first blush, it was pretty much as expected, with original art by Lee and other local artists setting it apart from other strip-mall noodle houses.

A couple of fresh faces stood behind the counter juggling takeout and dine-in orders, while an older chap who appeared quite deft at handling a wok anchored kitchen responsibilities. Given the sheer number of items available (close to 150 on the menu), he probably has one of the thickest, strongest wrists in Orlando.

A picture menu will hold your attention while you hold up the line forming behind you, so it's best to grab a bill of fare, peruse an assortment more varied than characters in the Chinese alphabet while you're waiting, and then order. A majority of the patrons here are students, and Panda Bistro seems to straddle the line between catering to undergrads with unsophisticated palates and ministering to neo-hipsters who fancy themselves connoisseurs. As at Tatáme, that's Lee's target demo ' and they're literally eating it up.

The pair behind the counter seemed so inundated with carry-out orders that it was a while before our order was taken. All was forgotten when the egg drop soup ($2.95) arrived, its clear yellow broth, suspending silken strands of golden yolk, making a comforting start to the meal. Edamame ($3.95) appeared to be overcooked, but the soybeans remained full and plump. Mains, as you can imagine, run the gamut. We opted for the Hunan Double ($9.95), an altogether ordinary stir-fry of beef, chicken and the requisite vegetables in a thick, broccoli-heavy sauce. The dish lacked that seasoned-wok essence that separates a good stir-fry from a great one (like Tasty Wok's); if you want it spicy, better ask for some sriracha and chili oil. Pan-fried noodles ($9.95) came served with a lighter sauce that was a little more flavorful than the Hunan, but it was the perfectly crisp egg noodles that made this dish worth ordering again. I'm not sure I'd order the boneless Peking duck ($13.95 half; $23.95 whole) again. The shiny slabs of dark meat looked nice sitting on a bed of scallions, accompanied by mu shu pancakes and hoisin sauce. But the duck was a bit too greasy and the sauce a tad too gluey for our liking.

When diners are presented with scores of options, the fare is bound to be hit-or-miss. A more focused menu would certainly help, but when you sustain a student body with diverse backgrounds and tastes, variety can take precedence over a concentrated approach. And Lee is the key. She knows her audience, and as ambitious, creative and determined a gal as she is (she often delivers food herself), Lee's sure to make Panda Bistro a success ' even if she has to grin and bear it. 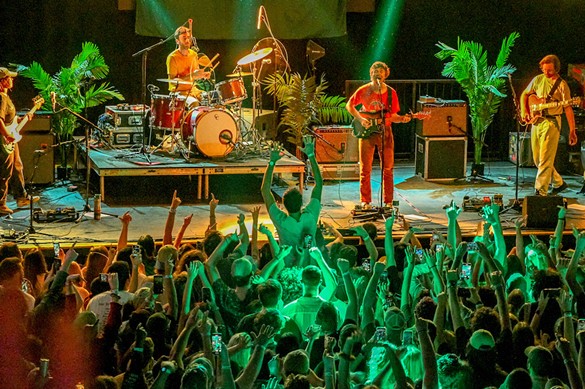