Our music columnist explores Mount Kimbie, but still doesn’t know what post-dubstep is 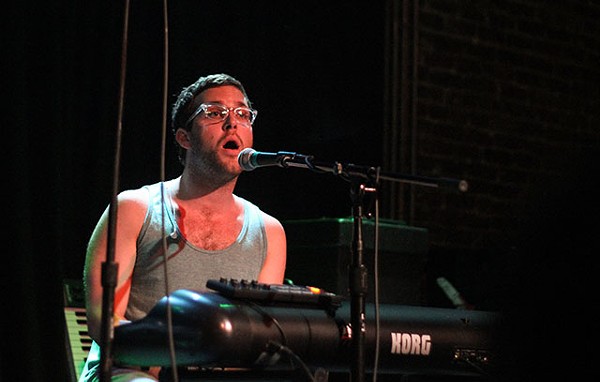 It was a diverse, albeit uneven week for electronic heads. But the results all around were surprising.

I’m reasonably versed in EDM taxonomy. I know the difference between house, techno, electro, breaks and moombahton. I, however, have no fucking idea what “post-dubstep” means, a term frequently attached to London’s Mount Kimbie (Oct. 14, the Social). What I do know about them is that they’re on the ambient, experimental and, well, thinking side of the electronic music moon. Instead of the big, rollercoasting dance-floor politics of build-ups and breakdowns, these guys are into voyaging. Whether it’s outer space, inner space or both simultaneously, they’re all about the unfolding.

But despite their often-subtle recorded presence, they turned up the pulse and volume in person with artful, stage-spanning visuals and legitimately live elements like drums, bass and guitar. Anyone with a complete show like this deserves full credit. But more than that, they did especially right by their own music, rendering their intricate craftsmanship with more pop and instancy. And the heightened performance style highlighted the sharpness of their architecture and intent. It’s redemptive to see an electronic act so in touch with the live aspect of their music and presentation. And Mount Kimbie is a benchmark of electronic performance.

Also good and interesting was L.A. opener Jonwayne, an MC/producer from the esteemed Stones Throw Records fam. Although not quite anti-swagger, the Flying Lotus collaborator definitely had an alternative cool in his steeze. Maybe it’s the package, but you don’t exactly expect to hear such assured, commanding raps to flow from a burly longhair who would look much more at home in a comic book shop than a cypher. But that’s what you get – and, turns out, it’s legit.

Speaking of Jonwayne, one of his boys, Groundislava, rolled through town 48 hours later (Oct. 16, the Social) with his dope-chill blend of silver-clouded melodies and fat-assed bass drops. Even as an opener, his punctuated, pulse-boosting sound came with peak-hour kick.

Also opening was Atlanta’s Time Wharp, who was much less concerned with excitement and partying. Or maybe the deep, cerebral EDM hues he was stroking were about a different kind of partying. Unfortunately, his particular frequency’s more effective as an accompaniment to drugs than on its own. They say we’re in the midst of a house music revival. If that’s true, then this probably doesn’t have any business being played before 4 a.m.

Headlining was West Coast glitch-pop act Baths. Despite the electronic medium, Baths’ abstract, non-dance work isn’t just soundscaping – it’s emotionally bare music with a clear emphasis on the singing of Will Wiesenfeld. But despite that – and the intriguingly dark personal currents that run under the rippling surface of his music – little of this depth translated live. And in spite of being the only one on the bill with an extra set of helping hands, his set sounded thin and wholly imprisoned, rather than enabled, by technology. Even his defining falsetto was demoted in the mix. Amazing how much feeling can get lost when a live show isn’t rightly conceived and executed.

Izzy Zaidman’s latest band, Izzy & the Catastrophics, recently played (Oct. 17, Will’s Pub). The big feather in Zaidman’s cap is that he was the guitarist for Wayne “the Train” Hancock, the alternative traditionalist country hero who – hot damn – happens to be playing Orlando this Friday opening for the Reverend Horton Heat (Oct. 25, the Beacham). Similar to the Kesstronics, another Zaidman project that’s toured through, the Catastrophics are a throwback gumbo of vintage American style: rockabilly, jump, swing, Dixieland jazz and, of course, rock & roll. Izzy himself is a direct spiritual descendant of Chuck Berry and Jerry Lee Lewis. And he may have old-school, kitsch-drenched showmanship that sometimes verges on corn, but dude’s got flame-throwing chops that are unassailable.

The kids are digging folk music right now, and opening Fort Pierce band Gravel Kings are as good a look from Florida as I’ve seen lately. They’re youthful and pleasant sounding enough without getting too, y’know, pop. With some nice lap guitar, these boys even have a little country in ’em. But at their core are solid songs with a lot of heart and melody, all delivered with bright ease.