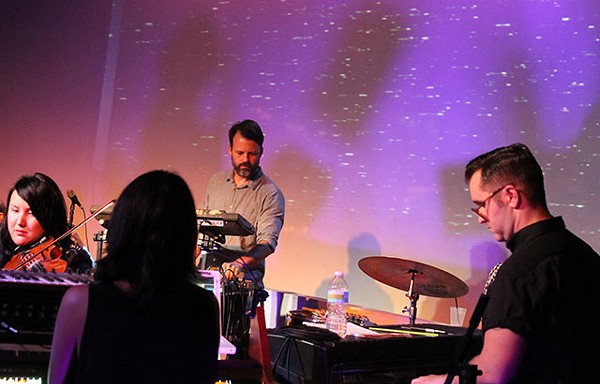 Probably this week’s most buzzing local music event was the Anamorphic Orchestra (Oct. 2, the Venue). The orchestral project sports lots of pedigree, though practically all of it outside of classical circles. It’s a joint between Orlando’s Henry Maiis, who’s well-known in the experimental scene as the mind behind ambient act Attached Hands, and erstwhile local musician Alan Singley, whose oddball pop ways are often just beyond gettable. And this debut symphony was a one-time-only performance that managed the impressive feat of selling out in advance.

Live, the show featured video and a 12-piece orchestra amply populated by pros. Although perhaps unusual in conception and execution, the symphony – whose working quirks could be read all over the faces of the players – wasn’t especially out there. The versicolor, generally lighthearted orchestral soundscape covered both traditional and contemporary ground, touching on jazz, baroque pop, rock and light funk.

However, though Singley says he’s all in with orchestral music right now, the Anamorphic Orchestra’s most interesting and natural moments were when they led with an indie-rock foot. But those moments were too few.

Although it didn’t quite live up to the avant-garde promise it advertised, I very much like the idea and ambition behind the Anamorphic Orchestra. Its intrigue right now is perhaps more as a crossover project than a purely innovative force, but the production was an endeavor of scale with a real sense of happening, one of those special-event performances.

As for the Venue (thevenueorlando.com) itself, the fairly young performance art space with local bona fides is thankfully not as generic in identity, reputation and setting as it is in name. Though not necessarily dedicated primarily or specifically to live music, it’s a nice, creatively repurposed facility for it, especially non-rock events like this. Just as importantly for the neighborhood, it’s a welcome node of activity along the awakening Virginia Drive corridor bridging the dynamic Mills 50 and Ivanhoe Village zones. Urban connectivity, yuh!

Colorado-based producer Michal Menert (Sept. 30, the Social) also made a nice splash. Best known as the co-producer of the debut album by breaking EDM act Pretty Lights, he’s one of those performers who grandly defy the typically low live expectations of electronic acts. His music is pretty good, but it takes more than that on stage for this kind of stuff. Luckily, he knows that and had the decency to bring a relatively serious production with a legit live drummer and a big light show. The aggregate impact of the spectacle carved a deep sensory groove into the night that upholds EDM’s best instincts.

Fellow Colorado boy Mikey Thunder spun a hyped, fat-dropping DJ set, which is always a little awkward when a club’s as quiet as it was during his early opening set. But total credit for his fuck-it party attitude, because this dude soldiered on with spirit and actually bought a round of tequila shots from the stage mid-set for anyone who raised their hand.

The most noteworthy opener, and my main reason for showing, was Seattle’s Odesza, who were on their first-ever East Coast swing. Though their stage show was less dazzling than Menert’s exhibition, their music’s something special. With Purity Ring’s towering synths and hip-hop’s sampling aesthetic, they inhabit the same dream-psych electronic wonderland as the pacesetting Relief in Abstract crew. It’s a forward-looking vision of liquid, tuneful elegance. And despite their cloud-lifted drift, there’s laser-guided pop aptitude with often stunning melodic perfection in what they do.

Another standout opener impressed me at the City and Colour concert (Oct. 5, House of Blues). With a lovely, just-released debut LP (States), Australian band the Paper Kites play a lush, pristine brand of contemporary folk-pop. But unlike the current tide of young folk-poppers, they’re uninterested in being cute. In fact, on the surface, there appears little in their mellow, unassuming, zero-flash music that might hook your basic pop audience. But here’s the thing: It comes in gentle but deceptively large waves. And it may steal over slowly and quietly, but it ultimately winds up around you in total envelopment and embrace. By the time you realize it, you’re already swimming in its richly crafted beauty.