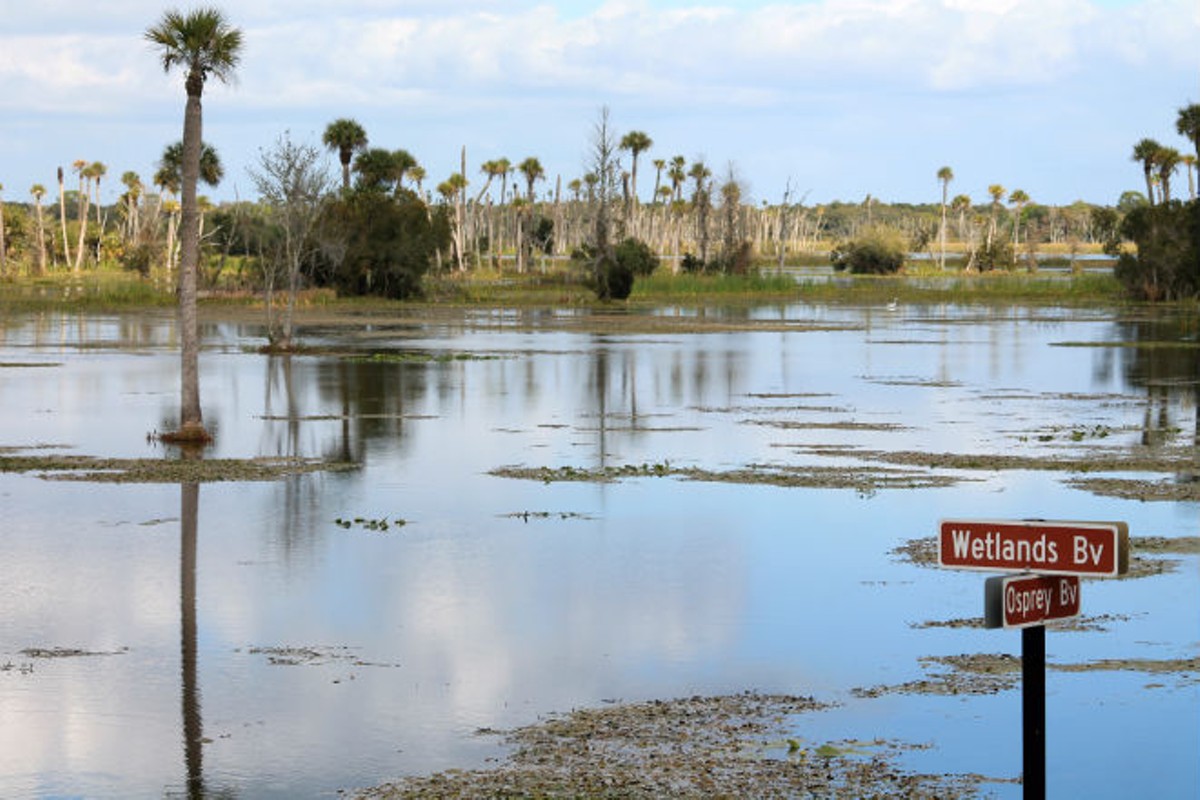 When you flush your toilet or turn your tap, be sure to thank the Orlando Wetlands Park.

The 1,650-acre property in Christmas in east Orange County used to be a cattle pasture. Then the city of Orlando purchased the land for $5.1 million in 1986 to help treat water on a larger scale in response to population increase and the Clean Water Act of 1972.

Volunteer Bob Rope worked with the city of Orlando when the Orlando Wetlands Park was completed in 1987 and advocated for the wetlands to not only function as a filtration system, but also as a park open to the public.

“It could have been totally fenced. The purpose of it is to clean up sewage, and so to some people it’s like, ‘Why would you make a park out of that?’” Rope says.

Today, an estimated 15,000 visitors flock to the park annually to utilize the 20 miles of trails, for bird-watching, cycling, running, horseback riding, photography or simply enjoying a change of scenery.

Though the park is just 27 miles from downtown, it feels far away from the hustle of living in a city as sprawling as Orlando.

“The advantage is you can get to the natural wetlands area without traveling so far,” says Jack Rogers, a Valencia College professor of environmental science and nature photographer who recently instructed a group of 12 nature photographers as a fundraiser for the Orange Audubon Society.

One of these photographers, Susan Kirby, moved to Lake Nona from Maryland three years ago and has been to the park many times since to take pictures and go for walks.

“The very knowledgeable tour guide had us coming back more and more and more,” Kirby says, pushing a stroller carrying all her camera equipment.

The biodiversity of the wetlands has appealed to many in the area, even youngsters. Augustine Chan says he chauffeurs his 11-year-old son Avery to the park from Oviedo about once per month.

Helen Wicker, a visitor from Avalon Park, finds the park a very spiritual place: “I like coming out and seeing the variety of God’s creation. We’re so fortunate, even in the city that we can come quickly out to nature and get some nice exercise and enjoy the fresh air,” she says.

Her husband, Mike, on the other hand, finds the park scientifically fascinating: “I enjoy thinking about the wetlands from an engineering point of view,” he says.

Wastewater from the city of Orlando flows to the Iron Bridge treatment plant off Alafaya Trail, just north of McCulloch Road, 16 miles northwest of the park. There, it becomes “gray water” once solid waste and bacteria are processed out of it.

Gray water is clear, but high in nitrogen and phosphorous – “liquid fertilizer,” volunteer Mark Pollitt calls it. Some of this water is used for irrigation, but the leftover flows 16 miles to the Orlando Wetlands Park.

The park is certified to intake up to 35 million gallons of gray water each day and it flows, purely by gravity, through 17 manmade cells. These cells, equipped with more than 2 million aquatic plants and 200,000 trees, filter out excess nitrogen and phosphorous.

The water is tested every hour around the clock to meet Environmental Protection Agency specifications. By the end of the 30-to-45 day cycle, the Orlando Wetlands Park’s water is cleaner than the St. Johns River, where it is eventually deposited.

“We’re cleaning the water and we’re providing an incredible habitat for wildlife and we’re recreating lost wetland habitats. Plus it’s a public park. This is a win-win-win project,” Sees says.

Because the Orlando Wetlands Park has wildlife, people should use some caution when visiting.

Sees recalled a story of a man who ran up to him panicking because he witnessed an alligator grab a deer and drag and roll with it down into the water. While he thought it was amazing, the man was scared.

Sees says alligators are monitored to ensure the safety of guests. Staff perform rounds of the wetlands on a golf cart to make sure the gators are still scared of people. He says that alligators generally only lose this fear when visitors feed or harass them, which is illegal. When it does occur, they call in a trapper.

He can notes that many times people visit the wetlands and tell him they “lived in Orlando my whole life and never knew this was here.” He encourages the public to come visit the park to learn what it’s about.

To educate and interest people in the project, the OWP will hold its 15th annual festival Saturday, Feb. 21 from 9 a.m. to 3 p.m. at Fort Christmas Historical Park, 1300 N. Fort Christmas Rd. in Christmas.

The festival celebrates the City of Orlando’s Arbor Day and the opening of a new season: Feb. 1 through Nov. 14. In season, the OWP is open sunrise to sunset every day.

“It’s just an amazing partnership between nature and man. Both benefit and the byproduct is just such a wonderful, beautiful place,” Mark Pollitt says, surveying the wetlands.

« At 80 years old, Rita Lucey defies centuries of doctrine and dogma by becoming a Catholic priest   |   How an aging generation is going to make us change how we think about health care »