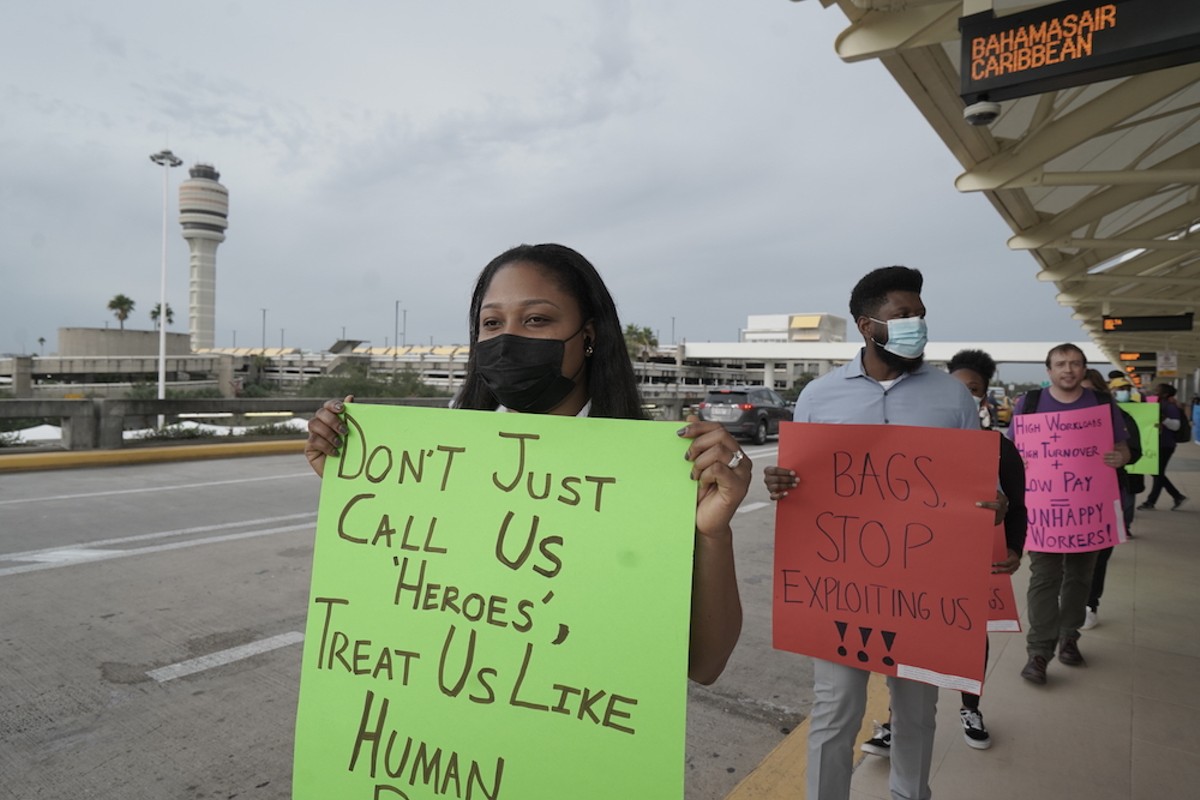 Orlando Weekly’s 10 most important stories of 2021

Labor struggles and the scourge of COVID-19 were the two issues that sparked Orlando Weekly news junkies' interest the most in 2021. While the rest of the nation was fretting about the same, nowhere did these subjects intertwine more knottily than in Orlando, where labor usually means face-to-face customer service and the coronavirus meant workers had to choose, quite literally, between their money and their life. (Our most popular slideshow featured a whole private island for sale in Key West, which could probably be filed under "pandemic anxiety" as well.)

No. 1: "'Overworked and underpaid': Orlando International Airport workers walk out on the cusp of MCO's busiest travel season," Nov. 24.

Reporter McKenna Schueler spoke to local members of the SEIU about their symbolic one-day walkout, meant to remind airport and airline bigwigs how crucial they are to the bottom line, despite being paid bottom-of-the-barrel wages. The awareness action brought to light the fact that as tipped employees, MCO wheelchair assistants are paid less than $8 per hour — despite the fact that tips from passengers are unreliable and the people who utilize wheelchair services often have disabilities and live on a fixed income. This reliance on tips places the responsibility for workers receiving a living wage on the passengers, rather than the employers.

Gov. Ron DeSantis kicked off the year by signing into law a number of problematic bills, but none so dystopian and despotic as his so-called "anti-riot" law, which is in fact an anti-protest law. HB 1 created new criminal categories and punishments for "violent protests," "property damage" and "injury," with laughably broad definitions of all those things. Critics who predicted highly selective enforcement of the law were proven correct in July during a rash of protests that blocked roads in major Florida cities to show solidarity with Cuba. In Orlando, hundreds of protesters blocked part of Semoran Boulevard near Curry Ford Road for about an hour. Only one person was arrested for unlawful assembly, according to the Orlando police. Any guesses how many arrests there would have been at the Black Lives Matter protests of the previous summer, had the law been in effect?

No. 3: "Buying bud above board: How to get your medical marijuana card in Florida," April 14.

In our annual 420 issue, arts columnist Seth Kubersky broke down the how-to's for a question many were asking in 2021, a year that surely drove more people than ever into the comforting arms of cannabis.

No. 4: "The latest revelations about Meadows' and Trump's coup-plotting aren't a scandal — they're a five-alarm fire," Dec. 15.

Despite having been published for only a week before we compiled this list, Jeffrey Billman's Informed Dissent column on the significance of the materials Mark Meadows turned over to the House committee investigating the Jan. 6 attack on the Capitol was one of our 10 most-read stories of the year. Whether it's despite or because of what some of our most strident Facebook commenters had to say, clearly readers were concerned by part of the White House planning to overthrow the American government.

No. 5: "John Morgan's marketing department argued over a nationwide dick joke. Half of them were later fired," May 27.

The marketing team of Orlando-born law firm Morgan & Morgan experienced its own version of a Thanos-style "Snap" this summer in a one-day staff purge. Staff was told it was due to "restructuring," although the firings followed months of external and internal grumbling over a billboard advertising campaign dubbed "Size Matters." (The campaign was intended to emphasize the enormous scale of the nationwide firm.) The team skews overwhelmingly male, but both male and female staffers questioned the wisdom of basing a campaign on a (rather limp) dick joke. PURELY COINCIDENTALLY, many/most of those who openly pushed back fell victim to the "restructuring."

Yet another illustration of the disastrous effect of the pandemic on front-line workers, this article told the story of Nathaniel Osborn, who waited more than 12 hours with acute appendicitis as ER nurses struggled with an influx of COVID patients. It was a reminder that while COVID sickened or killed millions of Americans directly in 2021, the indirect effects have also been lethal for who knows how many others.

No. 7: "Trump tweeted 'Big protest in D.C. on January 6th. Be there, will be wild!' and thousands of insurrectionists heeded the call," Jan. 13.

While this was more of a national story than a local one, many Floridians were among the Capitol rioters. Some of them are your friends and neighbors. This is one story that's most definitely far from over.

No. 8: "Lake-Sumter State College faculty on edge after the sudden dismissal of a tenured professor and key union member," July 28.

Another story of unfair termination and labor union wrangling, this article by Alex Galbraith covered the firing of Dr. David Walton, a tenured anthropology professor who had worked at LSSC for six years and was terminated over email in early June. The letter from college president Dr. Stanley Sidor telling him his contract would not be renewed did not specify a reason, but a letter between Sidor and Vice President of Academic Affairs Dr. Michael Vitale gave some indication: They objected to the number of courses Walton was teaching. LSSC staff we spoke to pointed out that course loads are assigned and approved by deans at LSSC, with little control given to the staff. They ventured a guess at a different reason for Walton's firing: Walton was a senior member of the faculty union, who are in the midst of bargaining their first contract with the school. It's had a chilling effect on morale, said union chapter president Dr. Debra Hicks: "If they can dismiss someone with Dr. Walton's credentials without a reason, then nobody is comfortable about their jobs going forward."

No. 9: "Orlando's restaurants have faced unthinkable setbacks: An epic labor shortage may be the one that reforges the industry," Sept. 8.

After an unbelievably difficult year for restaurants, our dining critic Faiyaz Kara spoke to chefs, managers and kitchen workers around town about the struggle bringing the industry to its knees. The pandemic gave low-wage workers time for a reset that had many asking why they were working so hard for such low compensation, and those who've been accustomed to a (albeit barely) profitable balance sheet that depended on low-cost labor are in for an unwanted reset of their own.

No. 10: "Is Florida COVID data activist Rebekah Jones grifter or hero, villain or role model, liar or whistleblower? Maybe all of the above," June 16.

Reporter Ava Loomar spent months talking to polarizing data scientist Rebekah Jones for this story. Jones captured the national stage when she went public with accusations that Florida's health department, at the behest of Gov. Ron DeSantis' administration, fired her for refusing to fudge the numbers on its official COVID case dashboard. Not one to be silenced, Jones created her own dashboard to offer the data she felt the state was withholding. She appeared on television to rail against the state's health leaders, progressive groups showered her with accolades, and she gained over 400,000 supporters on Twitter, who regularly expressed their gratitude. The state reacted by releasing details of Jones' "unsavory past" in an attempt to milkshake-duck her, then raided her home, carrying guns and a sledgehammer, to seize her computers. As is so often the case with whistleblowers, the human who spoke out against what she saw as wrong is not a perfect angel. But that doesn't mean the tune she whistled was off-key.

« Is anybody really standing up and fighting these days for democracy? Meet the Lincoln Project.   |   Notable Orlandoans look back at the most important, mostly great things that happened in 2021 »