Orlando food truck La Eskinna may be parked in a barren dirt lot, but its Mexican fare has proper street cred 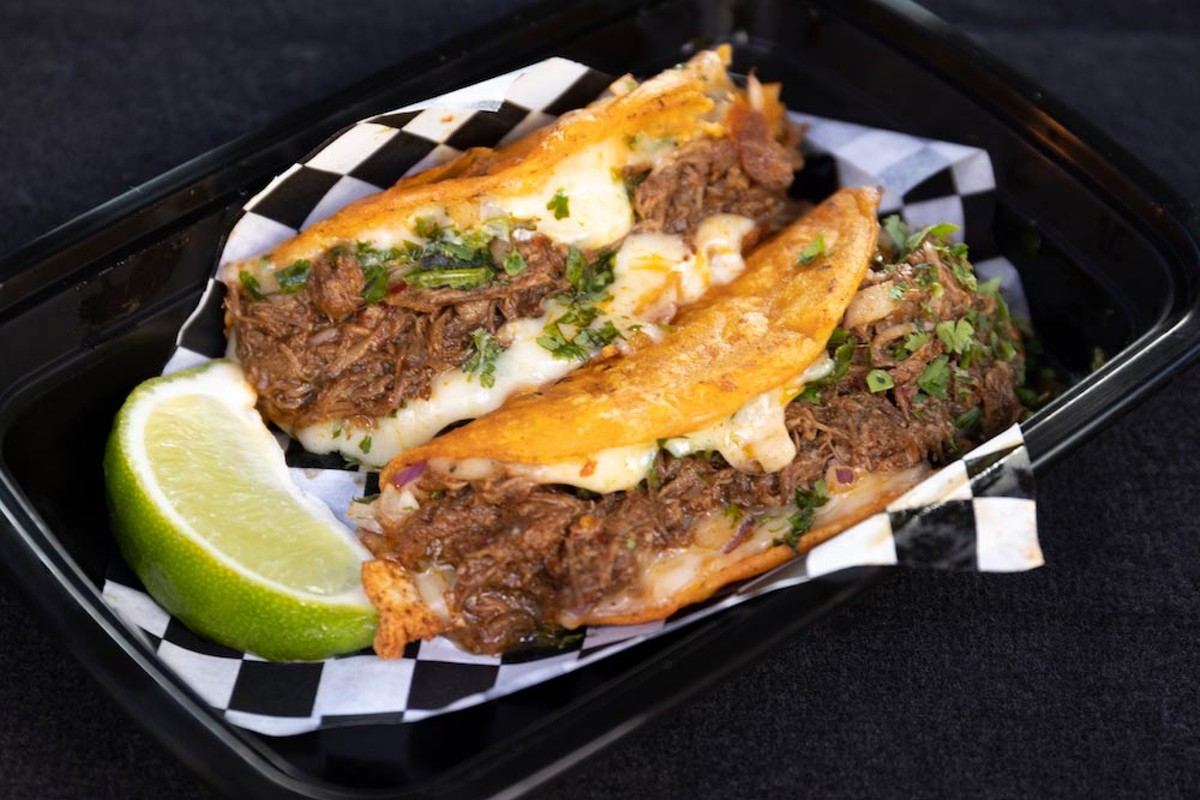 "You have arrived," chimed my navigation system, yet La Eskinna — the food truck purportedly serving some of the finest Mexican street food in town — was nowhere to be found. Our destination, 1826 Saturn Blvd., indeed resembled the post-apocalyptic landscape of some desolate, far-away planet: Around us lay nothing but dirt lots, chop shops, truck trailers and shipping containers.

It might've felt more eerie if we weren't still tripping from the nostalgic high of seeing 20 DeLoreans parked at the Florida headquarters of the DeLorean Motor Company off Satellite Boulevard. It was pretty far out. We gawked at the cars, took some pics and made plans to come back for a tour of the place (they even have a gift shop). While going back in time was a blast, being in the present had us a bit bewildered, which necessitated a call to La Eskinna for directions. Turns out they were parked at the end of Grazely Court (not the nearby Grazeley Court!), so make a note of that phone number — because you'll definitely want to experience the comida at La Eskinna.

If you're familiar with La Esquina, the trendy subterranean SoHo taqueria in New York, just know that La Eskinna is the literal antithesis of that culinary playground for models and celebs. But out of this black truck parked in an industrial wasteland are borne some superstar tacos ($2.49) — ruddy pastor, luscious barbacoa, plush asada and punchy pollo. They're brought right to your car after you park in a designated spot, scan the menu on your phone and place your order with the friendly carhop. The hood of my car had never looked more appetizing as we scarfed an absolutely gorgeous spread of food amid the oxidized metal and mechanical surroundings. There was something very WALL-E about it all, and man did we clean up, but not before addressing the mystery in the "mystery steak" taco.

Turns out the mystery lies in the sauce, fashioned from peppers, cheese, cilantro and onion, not in the meat. (It was asada.) The sauce is layered into a homemade corn tortilla, painted with birria sauce and fried. Yes, I said birria, and yes, they offer birria tacos ($2.99). The flavors in the beefy broth may not be as complex as Hunger Street's birria broth, but that didn't make it any less luxuriant or warming.

That said, I actually enjoyed the birria ramen ($6.75) more. When I first tried the birria tacos at Hunger Street, I used the leftover broth as the "sauce" in my spaghetti for lunch the following day, so birria ramen really spoke to me. In fact, I thought it said, "I can see the top of the JW Marriott from here," but that was my chum. He was chowing down on a taquito loaded with spicy mayo, cotija cheese and crushed Flamin' Hot Cheetos, pointing to the hotel's cupola about three miles away. My eyes, however, were transfixed on the sparks flying out of the concrete mixer being welded about 30 feet from the food truck. "I shouldn't have worn white," I said, looking down at my shirt and seeing the splatter of birria broth. Then it started to rain.

Surveying the uneaten dishes still on the bonnet, I hurriedly shoved peppery esquites ($3.99) and a vegan chorizo taco ($3.49) into my yap, followed by a gulp of horchata ($3.50). The meatless combo is one I'd easily order again. I packed up the churros ($3.99) and leftovers, and we drove off the lot.

"We gotta come back," I said to my pal as we turned onto Satellite Boulevard and approached the DeLorean facility. He glanced at the cars and nodded in agreement. "Yeah. Back in the future."

Doshi, a chef-driven, modern Korean restaurant, will open in Winter Park this summer