As a neophyte fry cook at Hardee's, an eager Chuck Cobb dipped his digits into a vat of hot oil used to fry chicken in what turned out to be an accidental act of self-hazing. He recounts the days of his first restaurant job from his barbecue stall inside a Citgo Quik Mart while prepping (what else?) a Nashville hot chicken sandwich ($9.99). He wiggles his fingers, sheepishly grins my way, then tosses the double-fried chicken thighs in a hot lard-butter emulsion. I try hard not to stare at Cobb's crazyass tats, willfully looking away for a moment to fidget with my mask and check the spacing markers taped to the floor. He looks up: "These pineapple buns are from Douce France Bakery," he gushes as he layers on the chicken, splurts on some chipotle ranch, spoons a heap of peach slaw and finishes it off with pickles and a squeeze of Mike's hot honey.

When he adds the bun on top, the result is nothing short of a colossus of cock. Hell, I wasn't sure how the lid of the to-go container was going to close over this edible towering inferno of chicken, but Cobb managed it. Somehow, the monstrosity wasn't the least bit squished when I got home. In fact, the sandwich – and its sweet, crunchy burn – held together quite nicely, at least for the first handful of bites. After that, it turned into a conflagration of chaos and, damn if I didn't enjoy every sloppy bite. It's the Git-N-Messy way, after all. 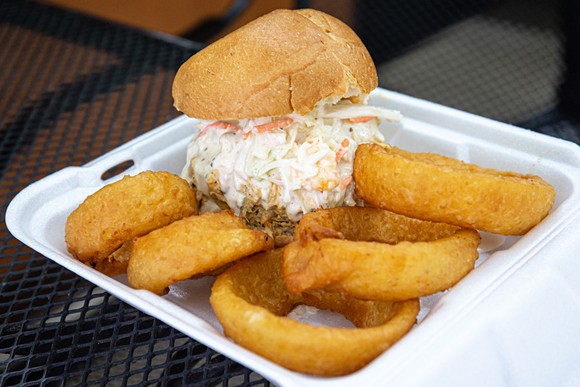 As Cobb prepped a half-rack of St. Louis-style ribs ($15.99), he talked about how Art Smith's father would come into that very same Hardee's in Jasper, Florida, every morning asking Cobb to make him a breakfast sandwich. When the elder Smith spoke of his celebrity chef son, Cobb had absolutely no clue who he was talking about. But that was long before Cobb trekked the long and winding road of gastronomy, a road that took him to Le Cordon Bleu followed by gigs at Pig Floyd's, Sushi Pop and Vera Asian, among others. He even ran a high-end, pop-up omakase concept called Zoetic Sushi in Sanford prior to opening Git-N-Messy. So he's got gifts, no doubt, including the gift of gab, but one thing's certain – the man can work a smoker.

The menacing beast of black steel fueled by aged oak is parked in the lot outside, next to his truck. Four hours is about all it takes to churn out the gnaw-worthy ribs. I brushed aside the barbecue sauce – the meaty cage simply stood on its own. Chat with Cobb a little more and you'll learn that "fall off the bone" is not a texture he aims for in his meats, be it the ribs or his 16-hour smoked brisket ($13, half-pound). He prefers a balanced ratio of flesh to fat, which is precisely what you'll find in that brisket, along with a peppery bark that's got a fair amount of bite. Fret not, all you Texans – the meat passes the bend test.

Canadians will undoubtedly find the Southern poutine ($13) to be an unholy mess of blasphemy. Sidewinder fries? Cheese sauce? Don't even get me started on the cole slaw, the pulled pork or the sea of barbecue sauce. This is the Ted Cruz of poutine – it's just plain uncomfortable to look at, but unlike the Canadian-born senator from Texas, a helluva lot easier to stomach. And pairing it with a heap of angle-cut pieces of jalapeño-cheddar smoked sausage ($7) gave me all the Boss Hogg feels. I knew that all-white suit would come in handy one day.

Back to Boss Cobb: You have to admire his grit and determination. He's serving top-notch barbecue from a less-than-ideal space while steadily building a legion of hard-core fans. He's the real deal, Rosco, and I'm not just blowing smoke.