"We named our Belgian blonde ale 'Bumby Blonde' because we wanted our guests to know we're part of their neighborhood," Ocean Sun Brewery co-owner Steve Wilkerson says. "My partners and I are all from Orlando, from this community. They matter to us."

Bumby Blonde pours hazy gold and tastes like a sunrise over Harry P. Leu Gardens. Ocean Sun's Belgian dark ale, Mur de Huy, draws a deep, delectable burgundy, with the expected date and fig notes to match. Each of the twelve house brews on tap, from their Freudian Lager to their delicious trio of IPAs, is impeccably brewed to their respective styles, a lofty achievement for any brewery, let alone for a year-old brewpub like Ocean Sun.

"We want to stay very true to traditional styles of brewing," Steve says. "If we put out a hefeweizen, we want it to taste like a hefeweizen. We just released a new schwarzbier, and we kept that very true to style. That's just something very important to us."

Ocean Sun isn't the first craft brewery to pop up in Orlando, and many more entrepreneurs are filing permits to proceed them. These local craft beervangelists have spent the last five years brewing standout beers and erasing Orlando's reputation as a ne'er-do-well brewing town. With small and independent craft breweries growing by double digits through 2016 onward, it was only a matter of time before the Beer Bug bit the third-largest metro in the country's third most populous state.

The City Beautiful has some incredible brewing forerunners to its north and south to draw inspiration from and show where the Orlando scene is headed. Massive contract breweries like Lakeland's Brew Hub brew the region's most eminent flagship beers by the thousands of gallons. Tampa Bay Brewing Company have slung their suds up and down the I-4 corridor for decades. South Florida, once a craft beer derelict, now harbors breweries like Islamorada Beer Company, whose growing popularity proves that if beach-and-vodka country can sell incredible beer, anywhere can.

Fortunately, brewpubs like Ocean Sun are already brewing incredible beer. Brewpubs, smaller-volume breweries that favor cozy tasting rooms over monstrous output, have carved a neighborly niche in the City Beautiful. Ocean Sun's three owners share decades of experience working at corporations like Darden Restaurants and Applebee's, and they used the knowledge gained from their desk-jockeying years to mule-kick corporate crustiness out the tasting room door. The front-facing bar is a home-spun hardwood façade of light, auburn and dark grains. Mash tuns and fermenters exist "in the wild," without a barrier separating guests from the soon-to-be beer. Ocean Sun's "beer guides" serve guests at their tables instead of schlepping guests to the bar, and guests' dogs bound around the tasting room while the bartop's popcorn popper mumbles merrily to itself in the corner.

None of this means Ocean Sun doesn't have plans to grow. Steve says he and his co-owners designed the brewery with future expansions in mind, and Ocean Sun recently signed with City Beverages, Orange and Osceola Counties' ascendant beer distribution company, giving Steve's beer children more exposure than ever before. Steve just understands that a homey tasting room goes a long way in transforming guests into regulars and friends.

"We wanted to open Ocean Sun with a brewpub approach," Steve says. "There's just a special excitement to that environment, but, at same time, you want to grow and distribute. I think there's room for both."

Whether Steve wants it or not, growth is coming. That happens when Travel and Leisure magazine names your business their sixth favorite local brewery, one of Steve's proudest recent achievements in his young craft-brewing career. Ocean Sun's tasting room seats 122 thirsty patrons, and Steve's brewery will need every bit of that legroom in the near, and distant, future.

"It's all about promoting local craft beer," Steve says. "All the brewers around here, we all get along great together, and we just want to bring some new guests along for the ride with us." 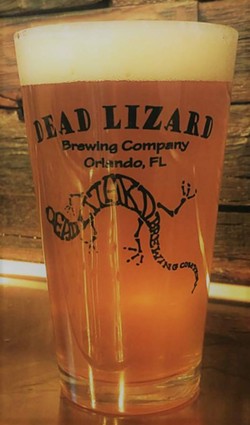 Drinking at Dead Lizard Brewing is like drinking inside a giant, lustrous tangerine.

Lizard is nothing if not becoming. Edison bulbs dangle from the tasting room ceiling, throwing a burnishing glow everywhere. Local artists adorn the cream and garnet walls with their latest works, and the marble bartop shimmers at sunset. A crowd of brew kettles and fermenters greets guests from behind glass partitions. Upon stepping into Dead Lizard Brewing's tasting room, the cicada drone of Interstate 4, just hundreds of feet from the parking lot, fades away.

"When you sit down for a beer, you're sitting down for a conversation," Dead Lizard co-owner Rich Dine says. "You don't talk to yourself about a beer. You need to talk about it, and share it, with someone."

I-4 is a highway in medias res. It cracks from ongoing construction in both directions and spills off exit ramps into the surrounding amusement parks and Florida Man punchlines. Dead Lizard sits at the throat of this thoroughfare, right off Exit 78 and Conroy Road, where Orlando, Florida diffuses into Orlando, USA—where the City meets the Mouse. Rich says Dead Lizard's decision to straddle both worlds was crucial to finding the fledgling brewery's soul.

"There are two Orlandos, and we have a really nice sweet spot between them," Rich says. "We're minutes from downtown, and we're minutes from the attractions. You're going to get to meet people across the bar from who knows where, from the local scene and the big scene."

"Those beers have really become our calling card, and they aren't even true cream ales," Rich laughs. "We aren't really adherent to particular styles. We just want to brew beer that tastes good."

For all the differences between Rich's and Steve's beers and brewers—Steve's cohort hails from the corporate hospitality world, while Rich has a 10-year career with Full Sail University—both breweries recognize they're in the same sudsy boat. Dead Lizard and Ocean Sun are proud members of the Central Florida Ale Trail, a collective of 15 upstart breweries and brewpubs set on raising the profile of local craft beer along the I-4 Corridor. Dead Lizard, like their colleagues at Ocean Sun, also signed with City Beverages. Since green-lighting that distribution deal, Rich has counted, and recounted, Dead Lizard's nascent successes during the brewery's eight-month run.

"One day, this gentleman sat at our tasting room bar and asked to try one of our Chameleon ales," Rich says. "I wasn't in a Dead Lizard shirt or anything, so he didn't know I had a vested interest in his opinion. He sampled it, he said it tasted great, and he ordered a glass. It was a defining moment for me, where I really understood what we were doing here."

These milestones lead Dead Lizard and Ocean Sun to American Craft Beer Week, a sudsy salute to the country's—and Orlando's—kaleidoscopic brewscape. From May 15th to May 21st, Dead Lizard, Ocean Sun and the city's luminous beer parlors will tap small batch kegs and throw special events along that fertile crescent of Virginia Avenue, Colonial Drive and beyond.

It's Rich's and Steve's hope that, under a radiant sun or a dew-flecked moon, surrounded by Orlando's finest beers and hundreds of their newest friends, a thought might bubble up in a new drinker's mind: that local beer, and the Orlando brewing family that crafts it, matters.