On the air for 60 years and still going strong, WPRK is one of American college radio's oldest stations. Despite an FCC hiccup last month, it looks like the station will continue to buck the trend 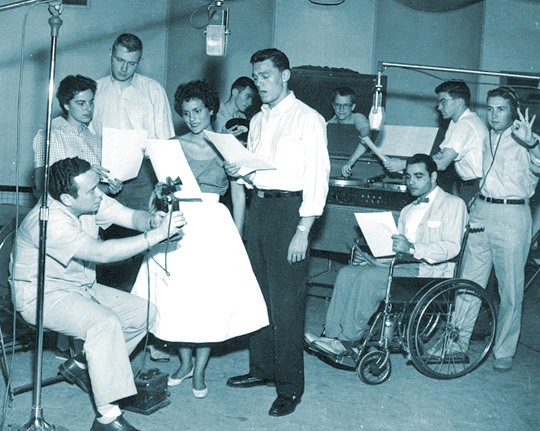 When radio silence hit the 91.5 frequency on the FM dial on March 7, there was a sense of alarm. Some of the WPRK regulars, volunteer community DJs and ambitious students alike, took to Facebook to explain that their aural flights of fancy would be suspended indefinitely: There was a problem with the transmitter (nothing new for a station perpetually low on funds), but little specific information was forthcoming. As the hours of dead air stretched into days, conspiracy theories weren't far off, nor were they unexpected.

The station that calls itself the “best in basement radio” – broadcasting from the Rollins College campus since 1952 – has seen its share of controversy over the years, most notably in 2000, when local public radio outlet WMFE-FM 90.7 made summer-semester overtures to Rollins administration with the intention of taking over the college radio playhouse. Though that deal was never finalized, this most recent moment of silence immediately gave rise to whispers that WMFE – fresh off the collapse of its deal with Daystar Television, a Christian outlet that had made an offer to buy its public television operations – was creeping again.

The timing couldn't have been worse. WPRK was already microphone-deep in planning this week's celebration of the station's 60th anniversary, something the audible vulnerability of not broadcasting at all would surely tarnish. Add to that the fact that across the country, the student-run radio station, home of free-form “alternative” tastemaking, is apparently a dying breed – according to The Chronicle of Higher Education, three universities made multimillion-dollar deals in recent years by selling off their FCC licenses to outside sources that immediately flipped formats back to classical music.

In fact, all the anxiety proved unwarranted. According to an email sent out by station manager Clark Sprinkel on March 15, the silence had a qualified justification, albeit a confusing one.

“The FCC licenses radio stations at a specific latitude and longitude, [and] our license says we are broadcasting about 8/10 of a mile to the northeast of where we are located,” he wrote. “The WPRK transmitter has been located in the same location since 1952. It has never moved. Our best guess is that when WPRK made the initial application to the FCC back in the 1950s, there was some sort of mix-up that recorded our latitude and longitude incorrectly.”

Following some obligatory paperwork, WPRK came back to life about a week after disappearing, picking up its ragtag sonic eccentricities like nothing ever happened. But so much has happened in that basement since the station went live 60 years ago. Christened on-air by a pomp-filled speech from Dwight Eisenhower himself, WPRK has evolved from a daytime extension of broadcast education to a 24-hour cultural resource. According to Sprinkel, after a few experiments to work out the kinks, the station plans to significantly expand its remote live broadcasts of local music and community events.

“Right now we're working on broadcasting an event from the Timucua White House [Saturday, April 8's Endangered Blood show],” Sprinkel says. “We're also hoping to broadcast not just music, but lectures or stuff like that,” like Rollins' Winter Park Institute series. “When we have somebody like Jane Goodall or Billy Collins speaking, we'd like to share that with people who can't be at the event.”

Today, even in light of an increasingly diversified broadcast industry – and that's not even including the proliferation of shuffling iPods – the station remains relevant, messy and integral to how we hear our region and how we live our lives.

“In the wake of all mass media basically dying in the face of the Internet, I think it's interesting, commendable and enjoyable that such things as college radio do still exist,” says WPRK community DJ Tony Maus (aka Phantom Third Channel), “that these quaint media continue to stick around.”

In their own words

WPRK from those who lived it

“I always saw my main role as helping develop the leadership skills of the students who were making all the same sorts of day-to-day choices and decisions. WPRK provides a tremendous hand-on learning opportunity for the students.”

“By the end of the summer in 2000 when news hit about the possible WMFE takeover, students and community members of the station banded together to try to bring the merge to a halt.”

“I started DJ'ing at WPRK when I was still in high school, on the graveyard shift. In fact, the radio station was one of the reasons I chose to go to Rollins.

“One thing I've noticed is every American I meet who has been working with music for a significant period – and I've met quite a few – spent quality time with college radio, no matter where they're from. Most often, like me, they were DJs and volunteers for their station.”

“WPRK is college radio at its best. Run by students, programmed by students, and enjoyed by the entire community. Orlando wouldn't be the same without WPRK!”

“What I remember most when I think of WPRK is Gordon Fraser, the general manager until 1990 or 1991. … He took me under his wing and trained me, just as he did Edwin Newman (NBC News) and Robert MacNeil (of PBS' “Newshour”). Gordon was a correspondent during World War II, assigned to various Army units as they trekked through Italy, traipsed alongside Patton in the mud in Germany, recorded the liberation of the concentration camps, and welcomed de Gaulle back to a jubilant Paris. What a gift it was to be with him and to learn from him!”

“I think that WPRK fills a gap for an audience that's looking for something outside of the larger controlled media. It definitely educates the community as far as different kinds of music and other things happening outside what the mainstream media reports on. Nationwide, at this point, to be on a freeform college radio station with no NPR affiliation is really rare.”

“Every semester they would tell me that I wasn't going to get a show because they were supposed to staff with students, but I always got a show. It totally helped me fall in love with music.

“Sitting in that chair for the first time and talking into a mike, that really in my early 20s made me realize that there is a place for me in the employment world.”

“I do have a nostalgia for FM radio. I really don't know how people in their early 20s think about it now. I grew up in Louisiana, and I used to hang an antenna out of my window so I could pick up this college station in Houston. There were these DJs in Houston that basically changed my life.”

“When I got there in 1984, the radio station was just classical and I thought that was a little strange … Students would come in, kind of like interns, to just play classical. It would turn off at 8 or 9 p.m. We petitioned to have a certain amount of hours. Then we got several hours. … What we did was revolutionary and extremely important.”

May 1924: Rollins College physics professor Harry Pierce begins low-power, 50-watt broadcasting at 580 AM, with the call letters WDBO (“way down by Orlando”). This is commonly believed to be the first college radio station

Oct. 30, 1928: Pierce co-hosts a 30-minute variety show on a Wednesday evening, along with his students, presenting music, drama and comedy.

Mid-1950s:WPRK broadcasts for about five hours each evening.

1959: WPRK is on the air from 8 a.m. until 2 p.m. daily, run entirely by students under the direction of Dr. Charles Rogers, the head of the college's communication department.

Oct. 19, 1962:The Winter Park Star reports that WPRK has “more listeners per watt than any other radio station in Florida.”

Feb. 24, 1989: The Orlando Sentinel reports that WPRK has been off the air for two days while the station addresses “a computer part in WPRK's transmitter.”

June 9, 1989: The Sentinelreports that retired veteran broadcaster Gordon Fraser “spends most of his days in WPRK's studios at Rollins,” as the station's general manager.

March 2, 1992: WPRK rejoices as the U.S. Supreme Court refuses to hear a lower court ruling, essentially ending a ban on “indecent” material on the air between 10 p.m. and 6 a.m., and creating the station's infamous “Safe Harbor” programming each night.

Summer 2007: WPRK general manager and student favorite Dan Seeger leaves Rollins to accept a position at another college. Seeger was the last dedicated general manager of the station (GMs since have split their time between WPRK and other campus advisory roles).