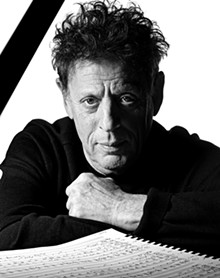 Philip Glass relates a telling anecdote in his 2015 memoir, Words Without Music: When the minimalist master was just 15, his father allowed him to take over buying classical albums for the family music store, and upon learning that the Juilliard String Quartet had recorded the complete Schoenberg string quartets, he ordered four copies. (That's about three more than might be expected to move in the average record store.) His father roared, "Are you trying to put me out of business?" but rather than returning the albums, he shelved them to teach Glass a lesson about the music business. It was seven years before the last one was bought. What did Glass learn? "I can sell anything if I have enough time."

"Time" may be the operative word when considering Nicolas Horvath's approach to Glass' music. The French pianist and Naxos recording artist will play a marathon concert consisting of Glass' entire piano oeuvre, plus more than a dozen tributes to Glass by American composers. The show is expected to last 10 hours, and Horvath will perform without stopping. (It may be an endurance test for the pianist, but the audience is welcome to come and go.)

"I composed a piano piece for Nicolas, which he performed at one of his marathon concerts in Paris at the Palais de Tokyo in spring of 2014, and I was grateful for his inclusion of my piece," Kornicki says. "I wanted to return the favor and have him perform here in the States. After connecting with Benoit Glazer [conductor of Cirque du Soleil's La Nouba and proprietor of Timucua White House], we scheduled a date for Nicolas to perform in Orlando at Benoit's performing arts center at a time when Nicolas was visiting the States. And voila!"

Glass is now so mainstream that his once-groundbreaking opera Einstein on the Beach has soundtracked commercials for Pepsi and Under Armour sports gear – baller Steph Curry and ballerina Misty Copeland showing off their superhuman talents to the "One two three four five six seven eight" intonations of "Knee Play No. 1." (It may not be surprising that the repetitive textures of that operatic intermezzo mesh rather perfectly with the rhythms of athletic training.) So, music by probably the best-known living American composer is unlikely to épater le bourgeoisie – it's the ultramarathon format that may shock. (Let's see Curry dribble perfectly for 10 hours!) Horvath has taken this approach to other composers besides Glass – in 2009, he performed a concert of Erik Satie's music, including the 20-hour piece Vexations, that lasted 35 hours. "Yes, that was totally mad!" Horvath writes cheerily in an email interview. "Past 24 hours, when you know you still have 12 hours to go, you really enter the Hell Realm!"

Despite the undeniable athleticism of these undertakings – Horvath says he fasts for at least a day, sometimes two or three, before a marathon – it isn't record-setting or physicality that's behind the feat, but love. Love of the music, not love of the game.

"It was in the late '90s when for the first time I came across Philip Glass' music," Horvath says. "I still today remember the effect this music had on me – like floating on a calm lake at night and watching the stars moving."

Later a pupil of his saw the 2002 film The Hours, the score of which is based on the Metamorphosis suite from Glass' Solo Piano album. "At the turn of the millennium, minimalism was still a deadly sin in Paris," Horvath says. "Philip Glass' music was never taught in French conservatories and few pianists took the risk to perform his music in concert. It was only after I won my first international competitions and was finally free to organize my own recital programs that I dared to test this music on the public .... Public reaction was always amazing, from goose bumps to tears."

As yet, however, Glass hasn't attended one of Horvath's endurance tests. "Unfortunately, I only shook Philip Glass' hand [once] almost five years ago," Horvath says. "Glass himself could not believe what I was going to do, and I must say that as he never expressed the wish to keep in touch with me, that he might not have believed that I would do it!" But he has, and he will, and you owe it to yourself to witness as much of it as you can.

This show is the official release concert for Horvath's latest recording, Glassworlds: Vol. 2 (Naxos), CDs of which will be available at the show – five days before international release.