Once you see it, you can’t unsee it. 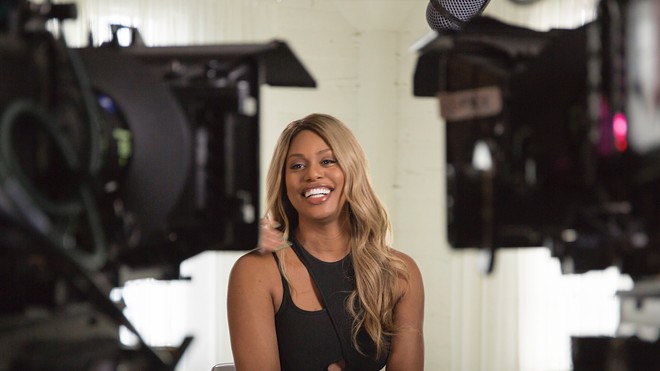 I’ve been complaining for years and years and years about the lack of fair, solid, human representation of women onscreen. But I confess I’d never thought much about the representation of trans women onscreen. Of course, trans women are women, and while it’s entirely within the realm of possibility that a trans woman could appear onscreen without anyone knowing that she’s trans (which has happened, we learn in this film) that hardly counts as trans representation. There have been very few fair, solid, human trans stories – about trans women or men – told in cinema.

Netflix doc Disclosure, by queer filmmaker Sam Feder, is here to school us on how problematic is the paltry bit of representation trans people have had in mainstream pop culture, and how to fix it. That latter bit is easy, if perhaps easier said than done: more trans creative people behind the scenes in Hollywood telling more trans stories … and more non-trans stories too. The former? Disclosure offers a sorry catalogue of the almost universally horrific ways in which trans people have been portrayed in movies.

These are things that many, perhaps most people, trans as well as cis, might never have clocked before: the unspoken, presumed neutral attitudes about gender and sexuality – race, too – that saturate our movies and television. But once you see them, you can’t unsee them.

Laverne Cox, maybe our first trans superstar, is a huge presence among the many delightful and entertaining talking heads, and discusses (among other things) how the history and legacy of straight cis male performers crossdressing for our “entertainment” holds up “womanhood [as] silly and … to be mocked.” This is disparaging to all women, cis and trans, but it’s especially hateful in depicting as ludicrous men pretending to be women – which in turn has helped shape the wrongheaded notion that trans women are nothing but men in disguise. The practice of casting cis men as trans women, even in sympathetic stories – think Eddie Redmayne in The Danish Girl, for instance – only underscores that.

And then there are the depictions of cross-dressers as murderously violent – Psycho, The Silence of the Lambs – or trans women as repulsive: Ace Ventura: Pet Detective, The Crying Game. And then there is the almost total erasure of trans men, perhaps because trans men are not “sensational” the way that trans women are. It’s not discussed here, but I’d argue that this is the flip side of the notions behind male cross-dressing: Of course a woman would want to be a man! Men are better, right? There’s nothing to ridicule in a woman aping a man; this is why Annie Hall is seen as chic and fashionable, not risible. And then there is the invisibility of Black trans men, connected to a tradition of straight (or, perhaps, perceived straight) Black male comedians doing drag as rite of passage, acceptable because it also represents an emasculation of the supposed hyper-violent Black man in America.

The focus of Disclosure is on Hollywood and America. Everyone who appears onscreen here is, I think, American … and they’re all trans people now working in creative media in the US. (Which offers some hope for things changing for the better.) Their attitudes about themselves, as they were growing up, were informed by the litany of garbage they discuss: how pioneering filmmaker D.W. Griffith, of The Birth of a Nation infamy, wasn’t just racist as hell but transphobic as well, setting the stage for future depiction; how medical and cop shows invariably feature trans characters only as victims. Yet also, how the hyper-femininity of glamorous Hollywood actresses, especially in Golden Age films, shaped trans women’s ideas of what “real” women should be. (We learn, too, about the surprising power of Bugs Bunny dressed as a girl.)

Unpacking trans representation onscreen is about unpacking ideas about gender, sexuality and race that affect all of us. If there’s one overriding message Disclosure has for us, it’s that trans people and trans experiences are, of course, important in their own right, but that they also have hugely valuable things to say about humanity on the whole, and how we think about ourselves – no matter how we identify.

(4 stars out of 5. Currently streaming on Netflix.)