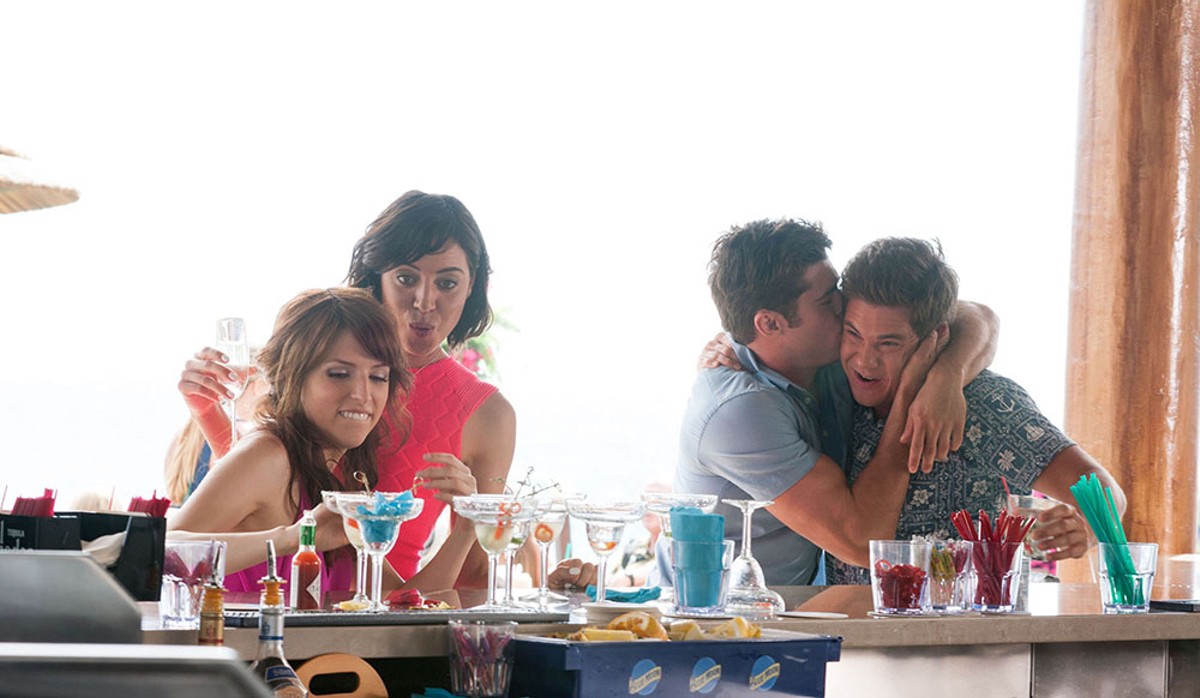 Watching this film will make you stupider

Start with a tired premise, throw in a sophomoric script, add a novice director, simmer in juvenile juices for 98 minutes, and you have the half-baked recipe for Mike and Dave Need Wedding Dates, one of the worst films of the year.

Brothers Mike (Adam Devine) and Dave (Zac Efron) ruin every family gathering. So when it's time to plan their sister's Hawaiian wedding, their parents insist they bring smart, responsible dates who will keep them from mischief.

"When are the two of you going to grow up?" their mom asks. "We are not party ruiners; we're party creators," the boys reply.

Still, they want to please their parents, so they place an ad online to find the perfect girls. After the ad goes viral, they appear on The Wendy Williams Show – yes, really – to discuss their dateless predicament. But they still can't find the right matches until Alice (Anna Kendrick) and Tatiana (Aubrey Plaza) randomly arrive. What they don't know until it's too late is that the girls staged the meeting and they aren't the smart, wholesome ladies they appear. Instead, they are the female equivalent of Mike and Dave. And there you have the lone intriguing aspect of the film – an aspect that's never fully explored amid the embarrassingly unfunny and infantile humor, nonsensical plot and haphazard structure.

More a collection of overly long SNL skits than a movie, Mike and Dave seems to be missing scenes. Characters appear as paper cut-outs, and motivations make no sense. Why do the women even want to go to Hawaii? They don't like their dates and have little interest in anything except drinking and doing drugs. If this were clever farce, it would be forgivable. But newbie director Jake Szymanski and writers Andrew Cohen and Brendan O'Brien don't seem to grasp the essence of farce. This is more fart: curse words and sex jokes thrown at the screen to see what will stick, all in an effort to pump up a lame PG flick into an R-rated romp. And when it tries to turn sweet and serious, it sinks into cringe-worthiness.

I feel saddest for Kendrick. Though she's the best of the leads, her career has gone from Up in the Air to up in smoke. (The Cheech and Chong reference is intentional, considering Kendrick's character's stoner sensibility.) Also worse off for their involvement with this film are Plaza, Efron and Stephen Root (who plays the father but is better known for his scene-stealing roles in Coen brothers films). Devine, however, doesn't take a cinematic step down as much as a sideways shuffle along his road to eventual obscurity.

Only Sugar Lyn Beard, as the bride, rises from this muck smelling sweet. She's the best and funniest thanks to her effervescence and sight gags, but even she is mostly lost in a film that has not one genuine or sincere moment.

"You're better than this," Tatiana tells Alice. Indeed, we are all better than this – not just the actors who portray vapid, horrible people, but also we, the audience, who are stupider for having watched them.

« For a movie about giants and the expansive power of dreams, The BFG feels rather small   |   Absolutely Fabulous: The Movie gives fans exactly what they’ve been craving, sweetie darling »