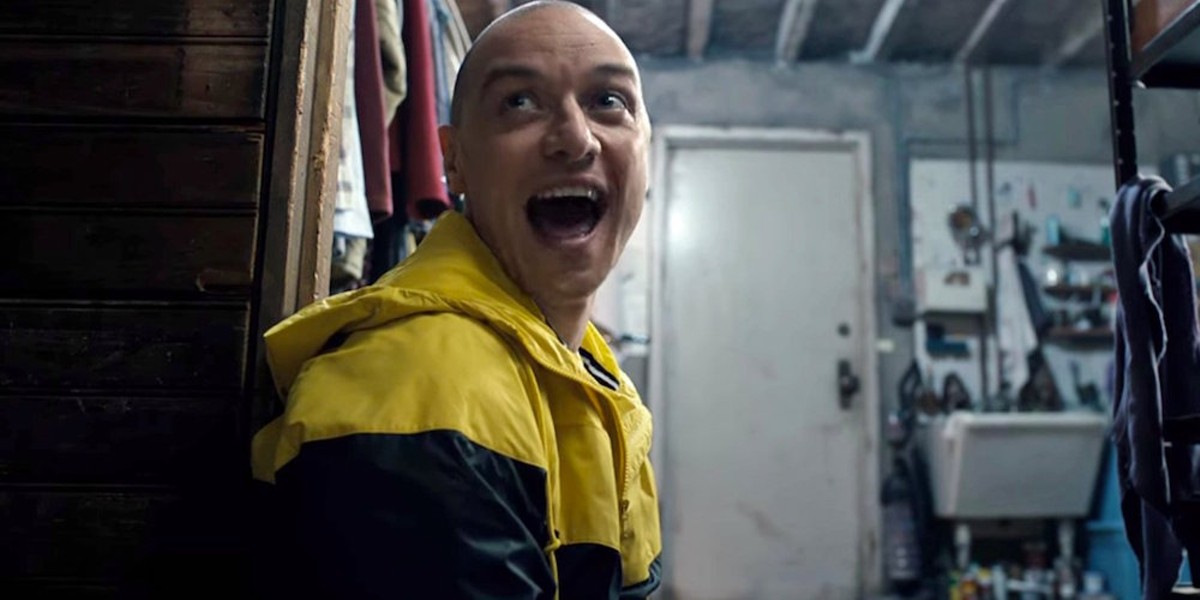 Though 2015’s The Visit was a substantial improvement over the train wreck of The Happening, it’s been more than a decade since M. Night Shyamalan has created a decent film. Though Split still doesn’t approach the quality of The Sixth Sense and Unbreakable, it is proof that the writer-director finally has something interesting to say again.

On the surface, Split is an abduction horror involving the kidnapping of three teenage girls by a psychopath with a split personality, or, more accurately, dissociative identity disorder. Kevin (portrayed excellently by James McAvoy) has at least 23 personalities, most of them benign. There’s Hedwig, the 9-year-old boy who wants to be friends with the kidnapped girls; Barry, a seemingly successful fashion designer; and even a woman, Patricia, who claims to have the girls’ best interests in mind. But also lurking within Kevin, just waiting for his turn at “the light,” is Dennis. Dangerously disturbed, he’s the one who snatched the girls and seems to hold sway over the other personalities. The final personality, which is apparently just a fantastical invention sprung from the minds of the other 23, is “the beast.” Exactly what this entity symbolizes is open to interpretation, but the fact that Shyamalan views Split as a thematic sequel to Unbreakable will give you a clue.

All the personalities are being treated by Dr. Fletcher (Betty Buckley), a psychologist intent on redefining Kevin’s illness and thus making a name for herself within the medical community. Departing from realistic psychological interpretations, she posits that patients with split personalities may be capable of both emotional and physical transformations heretofore unappreciated.

“Is this where our sense of the supernatural comes from?” she asks. I won’t spoil the film by answering that question; suffice it to say Shyamalan departs dramatically from what appears from the trailers to be a standard thriller. And, yes, there is a twist, but it’s more a shift in genre than a traditional plot surprise. Seen through a conservative or even plausible lens, the movie’s latter half is messy and slightly ridiculous – and certainly too long.

Another detraction is the performance of Buckley, whom Shyamalan fans might remember as Mrs. Jones in The Happening. This is a much more important role, however, and requires her to go toe-to-toe with McAvoy, who gives perhaps his best performance since Atonement 10 years ago. She is not up to the task. Balancing Buckley is Anya Taylor-Joy, who first made a splash in The Witch, an underrated horror from two years ago. As Casey, one of the three abductees and the only one who truly challenges her captor, she is remarkable. And it doesn’t hurt that her character has an interesting history of her own, which is told partly through flashbacks. She, like Kevin, is psychologically damaged, and their shared experiences create an unlikely bond between captive and captor, the latter of whom believes, “The broken are the more evolved.”

Yes, Shyamalan does give himself a contrived cameo, but that’s forgivable when you consider what he gives us. Included in his directorial gift basket are his trademark long takes, deliberate pacing, close-ups, non-subjective camera that stays disturbingly focused on his characters and a re-examination of a genre you thought you knew.

“We are what we believe we are,” one of Kevin’s myriad personas professes. That theory might make little sense when interpreted by our traditional five senses, but when viewed through the prism of Shyamalan’s cinematic sixth sense, it somehow achieves plausibility.