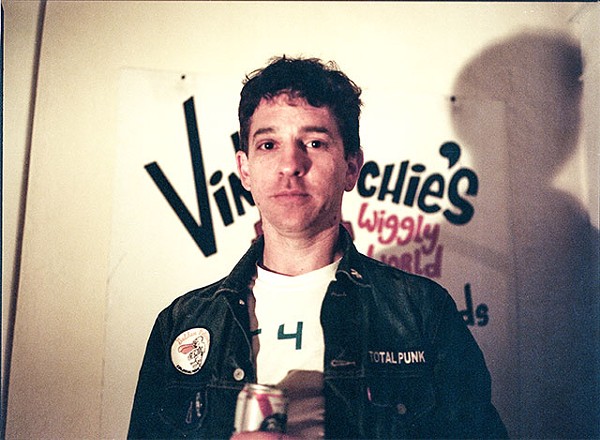 “I’m sorry your shipment has been delayed. I was jumping trains, and I got caught by yard police. I spent the last two months in jail. But I’m finally out, and I already spent your money. Your record has been shipped. It’s been a tough time for me, but this won’t happen again; thank you for your patience.” If you were a rabid record collector – the type who seeks out limited batches featuring dutifully hand-stamped labels – and you got this message, you’d react in one of two ways. You’d accept your fate, politely, and continue waiting until the record you ordered ages ago at last arrived. Or, you’d go straight to your favorite punk forum and bitch until your fingers numbed and your “K” key quit registering. Fuck this crook.

Our world has become persistently impatient. Message boards are riddled with whiners. Opinions are king, and the king is kind of a moron. You’d have to be a total punk to actively seek out bemoaners. But that was the original idea behind local label Total Punk: to make it a joke. To push people’s buttons. To feed the hate. It’d be run under a fake name, of course, and the yarn told as an excuse would change with each release.

Luckily for serious punk fans and vinyl collectors, the label ended up becoming a much more earnest DIY endeavor. Working out of a Colonialtown house, Total Punk is managed entirely by Rich Evans, who some might know better as the drummer for notable Orlando punk band the Golden Pelicans, or as the show organizer who fosters a regional garage-punk community by delivering national headliners like King Khan & the Shrines, Cheap Time, Peach Kelli Pop and a slew of others to town. Evans was also the force behind Orlando label Floridas Dying and formerly ran Vinyl Richie’s Wiggly World of Records.

His Total Punk distro, which just celebrated three years of existence, is done through online orders on floridasdying.com, pop-up shops at shows and, for those in the know, an email request and impromptu drop-in to what would otherwise be a dining room, but instead is a den of shelving featuring some of the best current garage and punk releases on vinyl. But it’s not just that Evans is plugged in and an active member in this particular vein of punk – the appeal of Total Punk for hard-core fans, whose numbers grow with each release, is the doggedly DIY nature of the label.

Over the past three years, Total Punk pressed 23 releases, each hand-stamped – usually by Evans himself – and uniform, with the only visible change from record to record being the change in band names. They’re collectible, and some fans order copies four or five at a time because each pressing is limited and known to sell out quickly.

“I wanted something that resonated – as soon as you saw it, you knew what it was,” Evans says. “I wanted it to be more. Not only about the bands, but the label would have its own recognition. I think it actually worked out really well. People really caught onto it.”

Of all the releases, only two records are still in their first run; all the others are either out of print or on their second or third pressing. The demand has been high ever since the first single, Personal and the Pizzas’ Dead Meat vs. Joanie. And to reward Total Punk devotees and to celebrate his three-year anniversary, Evans is throwing the first-ever Total Punk Total Fuck Off Weekend March 7-8 at Will’s Pub, forming a lineup almost exclusively farmed from the Total Punk catalog.

Evans funded the festival entirely out of pocket and says he doesn’t even expect to break even. While sponsorship would likely have been an easy option – considering the broadened visibility of the label thanks to recent write-ups in Pitchfork and longtime support from blogs like Terminal Boredom – he just would never.

“I like people who for them, DIY is not just a phrase. They don’t have Kickstarters. Or corporate sponsorship. I like people who are actually doing it themselves, to do it themselves, and not doing it in some attempt to get famous or get rich, to end up in a car commercial,” Evans says. “You know, just doing it to do it. I’m like $4,000 in the hole right now on this thing. I didn’t take any sponsorship. I don’t wanna give somebody else credit for what I did. I’m sick of people who don’t actually have the guts to do things on their own.”

Featured bands include Liquor Store, Buck Biloxi and the Fucks, Video, Manatees and others who fit the cohesive aesthetic of Evans’ attentively curated Total Punk roster. Evans says even if you’ve never heard any of the bands, he guarantees a good time for folks who like music that’s both catchy and gritty.

“I didn’t pick these bands because they’re household names, I picked them because I think they are 15 of the best punk bands going now, and they are the 15 bands I want people to know about,” Evans says. “Most people didn’t know who the Black Lips, Jacuzzi Boys, Nobunny, the Spits or Shannon and the Clams were the first time I booked them here either, and look at them now.”