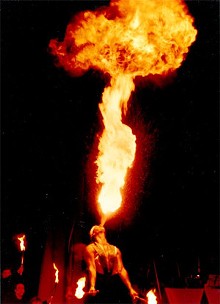 It's no secret that the whole Downtown Disney entertainment complex has devolved into a shadow of its former self. The retail-centric Marketplace district is still seeing healthy traffic, but a walk from the once-vibrant Pleasure Island through the West Side reveals shuttered nightclubs, an upcharge balloon ride that's frequently grounded by high winds, a recently vacated Virgin Megastore and not much else. You could probably bulldoze everything between the new Paradiso 37 Latin American restaurant and House of Blues, and no one would notice but the tumbleweeds.

But one Downtown Disney anchor is in it for the long haul. Cirque du Soleil and Disney recently sealed a five-year extension to their contract, keeping the surreal circus artists in the stylized big top La Nouba has occupied since 1998. On Tuesday, June 16, in honor of Cirque du Soleil's 25th anniversary, the Orlando outpost joins with other outlets around the world to reclaim the Guinness World Record for the "most people simultaneously walking on stilts," an achievement inaugurated with a similar stunt in 2004. The public can build or bring their own stilts (though Orlando's quota of participants is already full), or simply attend the 4 p.m. record-breaking attempt.

Thanks to the publicity push for Cirque's silver anniversary, I was afforded the opportunity to interview someone who's been there from the very beginning. Long before there were acrobatic extravaganzas in Lake Buena Vista and Las Vegas, Carmen Ruest was performing with the embryonic juggernaut on the sidewalks of Quebec. We met on a recent weekday morning for a too-brief conversation about her creative career.

Ruest's circus story began in the late 1970s when she moved from her tiny Canadian hometown of Rimouski (about three hours northeast of Quebec) to Montreal to pursue modern and ballet-jazz dance. While she was working a side job as a jewelry vendor at an arts and crafts expo during Christmas 1977, a burst of Fellini-esque circus music from a band of outdoor performers caught her ear. That troupe soon after added some European-style circus skills to their repertoire, and by the following summer Carmen was dancing with them on the street corners of Montreal for spare change.

The performers lived communally, touring the countryside in a converted school bus. By 1980 she encountered future Cirque co-founder Gilles Ste-Croix, who was then erecting a socially aware stilt-walker/acting company inspired by Vermont's Bread & Puppet Theater. Ruest, who by then had taken up juggling and the trapeze, became an integral member of the group, even sewing a giant dragon puppet for their debut. With the addition of Guy Laliberté the core of the team was complete, and by 1984 they officially became Cirque du Soleil.

That now-famous incarnation was to exist for only one season, formed for the express purpose of producing a government-funded touring family show honoring Canada's discovery by France. A few other projects followed before the grants ran dry, leading to a last-ditch drive to a Los Angeles theater festival in 1987. Carmen describes that "turning point" as a real-life "to live or die in L.A."; if their show hadn't been a hit, they wouldn't have had enough gas money to make it home.

Cirque didn't invent the animal-free circus, but Ruest credits it with innovating the integration of European-influenced culture, "visionary" direction and that intangible human factor. Maintaining the integrity of that vision means not forgetting the early days when they were "one blood" for the sake of the show.

Today's productions begin with "a wish, a vision and a business deal," and Cirque du Soleil can be a selective suitor. Disney pursued them for 14 years before opening La Nouba. Once the format and target demographic have been determined, it can still take a minimum of three or four years to go from concept to premiere. In Carmen's current position of "director of creation" she acts as a facilitator between Cirque's full-time artistic staff and the freelance directors brought aboard for each new show. It's a vital role, she says, since outsiders need guidance working for a company in which "impossible is not a word."

Since Carmen's career started on the street corner, she was visibly aghast when I told her of Orlando's restrictive anti-busking atmosphere ("Like a criminal," Feb. 26). She thinks street performing is "the hardest way to learn how to perform," but also "the most beautiful stage" for engaging the people with culture. She says street performers are profitable for a city (ask Edmonton, whose quarter-century-old Street Performance Festival brings in big bucks) and promote positive feelings in the community; she's even hired a few as principal performers.

Buskers are "the voice of a city," Ruest testifies, in case anyone in Orlando City Hall is listening.