Annoying and pretentious, or a refreshing return to Sunday-best styles in public? 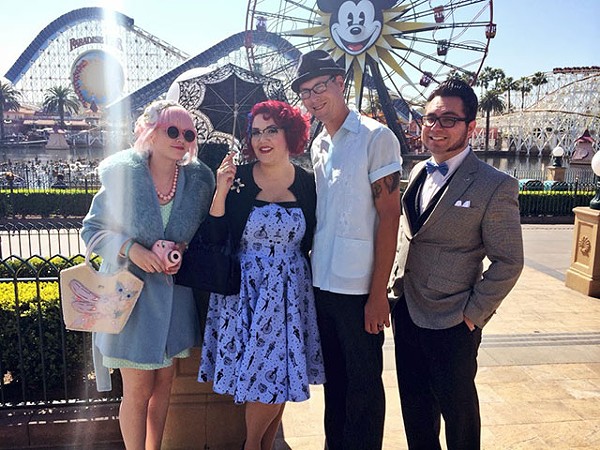 I recently flew home from a fortnight exploring amusement parks in the Pacific time zone (insert obligatory joke about sore arms here) and I’ve returned with news of the latest fashion trend for style-conscious theme park fans. Here in humid Orlando, the sartorial standard most often seen inside our “world-class attractions” (as the robotic narrator of OIA’s mold-infested monorails intones) revolves around ratty T-shirts, too-short shorts and every conceivable combination of sandal and athletic sock; rodent-shaped hats are optional, but strongly suggested. More recently, the chip-embedded MagicBand has become the latest must-have accessory inside Disney’s Central Florida theme parks, where by mid-March all off-site visitors – who are now paying a ceiling-scraping $99 plus tax for a single day’s adult admission to WDW’s Magic Kingdom – and annual passholders will join the on-site hotel guest guinea pigs in Mickey’s fully deployed MyMagic+ program, which promises to let you plan your out your princess and pirate adventures months in advance. (Try explaining to your spouse why you have to wake up at 7 a.m. to book your Soarin’ FastPass+ for next May.)

Much to the relief of Disneyland visitors, Bob Iger’s MagicBand mania hasn’t made it to the West Coast yet, though I hear it’s only a matter of time. For now, Anaheim is instead the proud home of a time-warp fan fashion movement that is imminently arriving here on the East Coast: the officially unsanctioned yet awesome semi-annual Dapper Day (dapperday.com), whose spring soiree coincided with my recent visit to the Disneyland Resort.

As a collector of vintage park postcards, I’ve always been fascinated by the Sunday-best styles sported by Disney guests in the 1950s and ’60s. Likewise, my coffee-table books of concept art by legendary designers like Herb Ryman and John Hench always feature natty families populating their futuristic attractions. Dapper Day makes those ancient attraction images come to life by attracting hordes who look like they stepped out of a half-century-old issue of Vogue or GQ.

Dapper Days were started at Disneyland in 2011 by Justin Jorgensen to “celebrate the tradition of wanting to look one’s best while out in public, and embraces the great social interaction that results.” The event has since spread to Disney parks in Orlando and Paris. I attended last February’s Dapper Day at Walt Disney World, which attracted a few thousand wannabe Don Drapers and Joan Harrises, but nothing could prepare me for the levels of temporal displacement I experienced in Anaheim on Feb. 23. By my estimate, between 10 and 20 percent of the guests at Disneyland Resort – men, women, even adorable infants – were dressed to the nines in vintage (or vintage-inspired) outfits; that translates into well over 10,000 participants. I strolled the parks in dress slacks, shiny shoes and a velvet sports coat, and still felt severely underdressed, if that gives you an idea how deadly serious some of the Dapper Day celebrants took their costuming.

It’s fair to note that not everyone is a Dapper fan. I understand how the spectacle can seem over-the-top and off-putting to the uninvolved majority of guests; the multi-hour queue of people schvitzing through their steampunk costumes to ride the Mark Twain riverboat around Frontierland was especially absurd. And while most of the outfits showed obvious care in their assembly, can we please call a moratorium on wearing belts and suspenders simultaneously?

But any bothersome aspects were outweighed by the event’s sociological value. As a professional people-watcher, I was struck by the demographic that embraces this type of thematic throwback. With countless creative tattoos and piercings spotted beneath the retro couture, I’d guess that a generation ago many of these same people would be considered post-hippie punks; today they are embracing their grandparents’ fashions, the same ones their parents probably rebelled against. Of course, not every attendee was a 20-something hipster; I got a little teary seeing some stylish seniors making the most of their midcentury-mod closets.

Most of all, for a day or two out of the year, isn’t it nice to remember a world where people – even those vacationing in a mousetrap – gave a crap what they looked like in public? Find out for yourself this Sunday, March 9, as Dapper Day returns to Orlando’s Magic Kingdom.