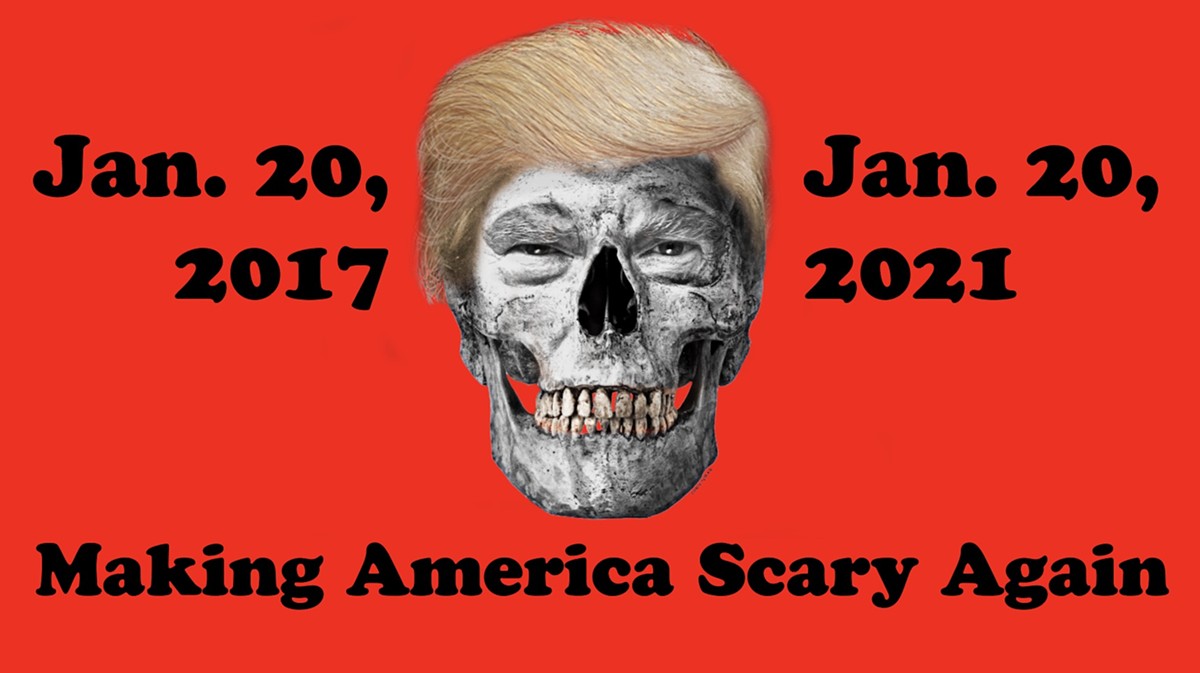 It’s not unity Republicans want now, no matter what they say. It’s surrender.

The people who tried to overturn an election want to sing Kumbaya now? Hard pass.

Trump will leave office with an approval rating at 29%, fewer American jobs than when he started and U.S. COVID fatalities about to top World War II deaths. He’ll depart under the ignominious cloud of a pathetic, anti-democratic, ultimately violent attempt to overturn the results of an election he lost by 7 million votes. He’s been abandoned by allies, deprived of his biggest megaphone and faces the possibility of criminal charges. Historians will soon rank him alongside James Buchanan and Andrew Johnson as the Worst President Ever.

Yet 46% of Republican voters say Trump bears no responsibility for the insurrection, and 64% believe he won the election.

So to vote for impeachment would expose Republican officials to the base’s vitriol — provoking primary threats and, some reportedly fear, death threats. But to defend Trump’s malevolence would further alienate both reality-based voters and corporate funders. It might also remind the country that more than half of them parroted Trump’s voter-fraud delusion, which nearly led to lynching of Vice President Pence.

The middle ground on which all but 10 House Republicans settled went something like this: Trump went too far, but impeachment was “divisive.” To cite a random example, Rep. Richard Hudson of North Carolina: “Rather than lashing out at our political opponents, every one of us needs to ask ourselves what we can do to tone down the temperature of the rhetoric, the rancor, and the violence.”

In other words, holding Trump accountable for whipping his supporters into a frenzy that got a cop killed will lead to more violence, so we shouldn’t hold Trump accountable. (And here I thought we didn’t negotiate with terrorists.)

Hudson, a proud member of the Sedition Caucus, is no more disingenuous than the 137 others who both did the rioters’ bidding and voted to give Trump a pass. (Tom Rice of South Carolina was the only election objector to vote for impeachment.) In the week between insurrection and impeachment, “unity” became a party line.

Look no further than Sen. Lindsey Graham’s letter this weekend to incoming Majority Leader Charles Schumer, demanding that Schumer dismiss the “meaningless” impeachment. Not doing so, warned Graham — who asked Georgia election officials to throw out all mail ballots from certain counties — would mean “delaying indefinitely, if not forever, the healing of this great Nation.”

To Republicans, it seems, healing can only exist on their terms. Unity is a one-way street.

For Democrats, the question is what’s to be gained from making nice with a party that cannot unyoke itself from Donald Trump — or, for that matter, a party that just two weeks ago was willing to overthrow democracy in service to its Mad King.

According to history, nothing. There can be no healing with those who feel entitled to supremacy and are willing to burn down institutions to get their way. The more you give, the more they take. They more they get, the more they demand.

More important, the pursuit of unity comes at a cost — not to those for whom politics is a game to be played or a profession to be monetized, but to those whose rights wind up sacrificed on the altar of comity.

In the run-up to the Civil War, for instance, the government desperately sought to alleviate Southern concerns about abolition. The Compromise of 1850, the Fugitive Slave Act, the Kansas-Nebraska Act, Dred Scott: all things that benefited enslavers. After one lost election, the South seceded anyway. The North couldn’t compromise enough.

The South’s fear was democracy itself: before the war, of evolving Northern opinion repudiating human bondage; after the war, of formerly enslaved people demanding equal rights. But for nine decades after Reconstruction, the center held on the South’s terms. With the two major parties ideologically incoherent, white hegemony went unchallenged and the country remained “unified.”

That ended with the Civil Rights Act. Over a generation, as the South became a Republican stronghold, the increasingly orthodox GOP grew increasingly evangelical, anti-intellectual, antagonistic to civil rights, and authoritarian. By Barack Obama’s election in 2008, the party had morphed into a far-right movement steeped in grievance and racial anxiety, radicalized by a propaganda machine that perpetuated an alternate reality in which white Christians were oppressed by popular culture, educational institutions, tech companies and the mainstream media.

As the saying goes, to those accustomed to power, equality feels like discrimination.

Like the South 160 years ago, democracy — specifically, the wrong kind of people participating in democracy — has become the enemy. Since 2013, when the Supreme Court gutted the Voting Rights Act, this has led to myriad attempts to make voting more difficult, usually couched in pretextual concerns about “fraud.”

After Trump’s defeat, cowing to pressure from the MAGA base, 147 Republicans in the House and Senate attempted the once unthinkable. They sought to discard (Black) votes in Atlanta, Detroit, Milwaukee and Philadelphia as illegitimate and reverse the unambiguous election results.

With the bloodless coup doomed from the start, Trump’s supporters — convinced by months of gaslighting that they were on the vanguard of a revolution against corrupt forces — stormed the Capitol while the president watched on television.

Now that both bloodless and bloody coups have failed, these Republicans want to forgive and forget so the country can “heal” — and, of course, so they can rehabilitate their reputations and refashion themselves as “serious” lawmakers whose inevitable sighs about Joe Biden’s “radical agenda” should be taken seriously.

That universal condemnation of Trump would also be unifying — and good for the country — never seems to have crossed their minds. But that’s how it goes: Anything that demands courage from them is “divisive.” And that’s the lesson for Democrats: As long as Republicans define “unity” in terms of their own comfort, they don’t deserve the presumption of good faith.

Get more Informed Dissent delivered straight to your inbox. Subscribe today at billman.substack.com.

« Continuing to cater to the MAGA crowd will send the Republican party into a radicalization death spiral   |   Congressional Republicans have only as much power as Democrats give them. Democrats should give them none »