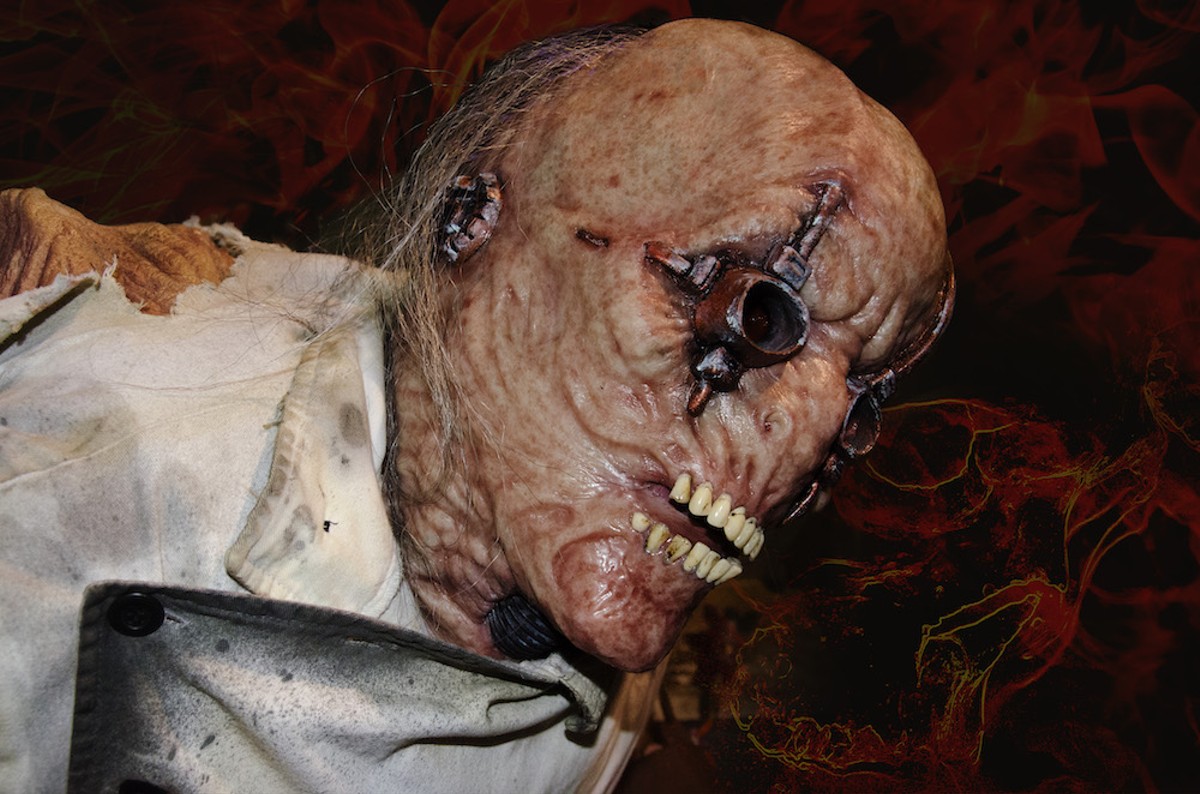 For a truly unnerving experience, get out of the theme parks and into Orlando's indie haunts

You wanna see something real scary? As entertaining as Universal's Halloween Horror Nights is, conga-line crowds and flashlight-waving employees inside the mazes always undercut any actual fear, holding HHN back from ever being truly terrifying. If you want the kind of unnerving experience that can only exist with isolation and intimacy, you'll need to get out of the theme parks and into an independent haunt.

Unfortunately, Orlando has a history of being hard on haunted houses that aren't associated with a major attraction; Terror on Church Street, Skull Kingdom, Nights of Terror and Terror in Orlando are among the city's extinct efforts, and this season's Slaughterhouse Escape in College Park was canceled due to zoning issues. So if you want to see something really scary, you'll have to head an hour outside Orlando and brave one – or three – of these independent haunted experiences.

When I first found Winter Haven's Shallow Grave during its opening year in 2013, it was like discovering a diamond in the rough. Despite its inconvenient location and inauspicious exterior, the creativity and passion driving the demons inside led me to instantly declare that Shallow Grave "rivaled or exceeded Universal's mazes in most respects." Four years later, my estimation of Shallow Grave has only increased, as the attraction has expanded to two mazes encompassing nearly 13,000 square feet; at $25 for both supersized haunts, it's a better value than HHN even after factoring in the long drive.

The original haunt has many of the same spectacularly disgusting sets and animatronics that grabbed me (literally) on my first visit, but the pathway through them has been remixed for this year's "Betrayal" edition, eliciting fresh surprises. Better yet, "Pavor Nocturnus" reimagined the former "ADHD" maze with an all-new asylum finale that genuinely freaked me out: When the crazy doctor asks you to touch his bloody fetus, I suggest you say no (or bring wet wipes). Shallow Grave creator Joe Phillips – who also portrayed murderous patriarch Thaddeus Van Buren – has become something of a "gorefather," inspiring other area haunters, but he's hanging up his ax after this season, which is advertised as Shallow Grave's last. His wife tells me that she's looking forward to having him home next Halloween, but I'm hoping that he'll have a new location (preferably closer to I-4) before too long. (shallowgravefl.com)

Long before Universal's movie-quality mazes even existed, I fell in love with Halloween through handmade neighborhood haunts and hay rides. Sir Henry's Haunted Trail in Plant City took me back to those more innocent days. Conveniently located only minutes off I-4, Sir Henry's two haunted trails don't have sophisticated animatronics, realistic gore or even ceilings. What they do boast, as Walt Disney said, is the blessing of size: At nearly a mile in total, these trails are longer than all nine of Universal's houses put together.

During the witchcraft-themed "Curse of Hollow Oak" trail you'll be wandering through the woods, surrounded by a zombie summer-stock production of The Crucible, while "Resurrection" is a credible re-creation of a crumbling mansion, minus the roof. Each has a handful of memorable effects, including a laser-lit fog bank and an inflated "birth canal," but there are also some confusing turns and long gaps between boos. Claustrophobics may find these trails more comfortable than conventional haunted mazes, and while the cast cleverly found some hidden spots to startle me from, the scares are a bit more family-friendly than the competition. (sirhenryshauntedtrail.com)

Ominous Descent was easily my most-anticipated freshman haunt this season, based largely on the perverse yet professionally polished backstory posted on their website. Their plan to open an enormous indoor/outdoor haunt in Bartow was blown away by Hurricane Irma, which destroyed parts of the former fruit-packing plant Ominous Descent occupied. Luckily, Sir Henry's Haunted Trail offered a spot for co-creators Eric Dodson and Chad Ashley to set up what they were able to salvage, resulting in a downsized "Wrong Path" edition of Ominous Descent being offered alongside Sir Henry's trails for a $30 combo ticket.

Though it only comprises a third of what was originally intended, the haunt is incredibly impressive, especially considering it was assembled in under two weeks. The environments and makeup designs are as well-crafted as the best indoor haunts, with a slaughterhouse theme that was so gruesomely immersive that I began having Temple Grandin flashbacks. Most importantly, Ominous Descent's performers go beyond relying on simple jump-scares, instead quietly intimidating you with unnerving effectiveness. Based on this terrifying taste, Ominous Descent is in prime position to carry the flag for Central Florida's independent haunts in 2018, providing they survive the next storm season. (ominousdescent.com)

« One of the best torch singers in Orlando has created a killer cabaret tribute to James Bond   |   A weekend full of puppetry-themed entertainment is just the ticket, unless you’re pupaphobic »