By Jessica Bryce Young @jby789
click to flip through (6) 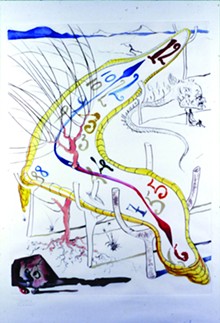 Although the artists Salvador Dalí and André Smith never encountered each other in person, thanks to a new exhibition at Maitland Art Center, their work meets this year – and it's remarkable what similar territory the two men explored. The newly designated National Historic Landmark (anchor and heart of the Art & History Museums – Maitland complex) opened Art and the Subconscious last Friday, teaming a dozen prints by Dalí from a 1972 suite called Conquest of the Cosmos with selected watercolors from Smith's 1936 book, Art of the Subconscious.

Dalí, the twirly-mustached artist and self-promoter, a man whose persona was as important to his reputation as his output (those melting watches and spindly-legged giraffes), was a paid-up member of the Surrealist movement, having "officially joined" in 1929, according to St. Petersburg's Dalí Museum. Smith, on the other hand, was a quieter man and artist; after his time as an Army artist in the Camouflage Corps during World War I, he settled into architecture, printmaking and set design. But perhaps they should have met: Smith, who always kept up with the fast-moving currents of the art world, was fascinated by the Surrealists.

In 1936, after moving to Maitland and establishing the artists colony he called the Research Studio, Smith published Art of the Subconscious, 33 etchings accompanied by short texts that Smith produced using the Surrealist exercise known as "automatic drawing": He set paper on the easel, cleared his mind, then drew only the images that floated into his consciousness, with no prior plan of composition. The resulting works "have in them the topsy-turvy qualities of dreams: vivid during the occurrence, but seldom recalled upon awaking," as Smith himself put it. The delicate, emotional images are dazzlingly hyper-detailed, massing layers of familiar objects in wholly fantastical juxtapositions, with poetic titles like "Women Know Where Men Love Best to Roost."

"I think it's the best work he did, outside of building the Research Studio," Sexton-Larson says. The more people that see this work, the better, as far as she's concerned: "They'll be surprised; they're these exquisite gems." Sadly, the museum owns just 23 of the 33 original images from the book. "I saw one on eBay the other day," Sexton-Larson says, though she declines to reveal whether the museum would bid on it. (A sketchbook of Smith's was acquired at auction recently, though.) "It would be nice to have all of them, to have this as a traveling show to other institutions," she adds.

Dalí's titles are, of course, even more over-the-top than Smith's: to wit, "Martian Dalí Equipped With a Double Holoelectronic Microscope" and "Saturnian Giraffe." The images, less directly emotional than Smith's, are undeniably stunning – angular, bizarrely contorted creatures stumbling across sere outer-space landscapes. These large prints are lithographed etchings, original editions (not the jillionth-generation junk flooding Internet art-sales sites), and seeing them "in the flesh," so to speak, brings home the artist's brilliance and eccentricity. His hand is visible in the distinctive line and luminous color.

"Surrealism is destructive, but it destroys only what it considers to be shackles limiting our vision," Dalí declared in 1929. Having put together a show of this caliber – the Dalí Museum rarely loans out works, but Sexton-Larson's connections at the St. Petersburg institution made this exhibition possible – and having achieved national prominence as a historic landmark, it's apparent that the Maitland Art Center has a clear and unfettered vision for the future.

« Photographer Donovan Brooks documents the dark side of Orlando's American dreamers   |   In Peter Schreyer's Switzerland, modernity creeps in between the chalets and placid cows »