My friend and I got to Harvey's Heathrow around 5 p.m., just as they were opening for the evening. We sidled into a bar booth and eagerly embraced our bronze paper menus. As my eyes rested on a delightful-sounding onion and ale soup with Gouda ($5), my friend said, "Oh, look. The beautiful people are arriving."

Startled out of my menu-reading trance, I looked up to watch a gaggle of golf shirts strutting in accompanied by fake boobs. Welcome to the Lake Mary dining scene, where replicas of great restaurants are set amidst the sprawl of construction.

The original Harvey's, a downtown Orlando establishment for more than 10 years, has decidedly kept up with the dining times, even if it's a little dated in appearance. The new Heathrow site has an updated appearance, while still maintaining the delicious set of standards upheld by the original.

The Harvey's in Heathrow differs from the original in one respect: The room is lighter and brighter and more airy than the dark-wood, bottom-floor-of-a-bank original. A shotgun dining room juts out from a spacious bar and is bathed in mint green and russet. Adorning every nook and cranny are design elements made of geometrical shapes – like the giant orb lamps suspended near small, angular square paintings.

We ordered a first course of lobster bisque ($5) and artichoke and cashew salad ($7) as we perused the menu for more. The lobster bisque was perfect: Sweet lobster meat mixed with rich, heavy cream that hit the tongue first. Then a subtle heat followed, tinged with pungent garlic and fragrant tarragon. Finally, a note of acidic sherry burst through, while the taste of cream still lingered. I was so absorbed that I barely had a chance to taste my friend's salad, but she insisted. Raspberry vinaigrette draped over greens and whole cashews made for a bright, clean flavor that paired well with artichoke hearts. We also tried Harvey's version of Caprese salad ($7), a mixture of underripe red and perfectly ripened yellow tomatoes stacked with fresh mozzarella cheese. This is a dish in which most restaurants miss the point. Let's face it: This is a seasonal salad, at its best when the ingredients are so fresh that the tomatoes are picked an hour before they're served (why even bother with a tasteless, green tomato?) and the cheese has been hand-pulled by the owner's grandmother in the basement. Unfortunately, Harvey's didn't quite meet that expectation, but the fresh basil and a crude pesto gave it some spunk.

The entrees are a mix of surf and turf with a few pasta dishes thrown in. My friend ordered the grilled petite tenderloin ($24), a succulent center cut of beef, well seasoned and cooked exactly to her desired doneness. A mélange of jardinière snow peas, carrots and onions, cooked tender with a refreshing snap of crispness, were dynamite. I eschewed my usual pot roast ($17) to try herb-crusted sea scallops on angel hair ($18). Drenched in a silky sauce of wine, garlic and clams, the pasta was irresistible. A few dollops of sautéed spinach made a bed for the herb-encrusted scallops, which tasted superb with nice salinity and a wonderful crust of herbed batter. But the four scallops themselves were a tad overcooked and on the rubbery side. There are many other choices, but if you like duck, don't miss the roasted half duck with triple sec and pistachio glaze ($19), a tribute to the undervalued bird.

For a nibble at the bar, I recommend ordering a bowl of truffle fries ($6), dusted with Parmesan and tossed with lightly fried shiitake mushrooms. They had a deft hand with truffle oil in the kitchen, and this dish was magic, instead of a mouthful of perfume.

We were full by dessert, but we couldn't resist at least sharing a slice of Key lime pie ($5), a pleasing balance of tartness and sweetness.

Harvey's is another successful addition to the expanding dining scene of the Lake Mary/ Heathrow area. Even if this part of town represents a maze of highways, malls, construction and suburban sprawl that I don't appreciate, at least they know how to eat up here.

Michael Bublé brought his old-time croon to the Amway Center in Orlando on Wednesday. Take a look at everything we saw. 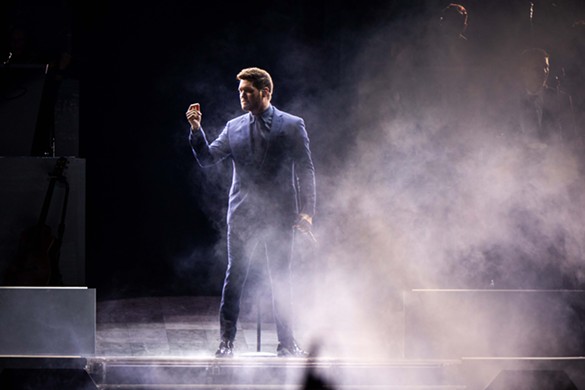 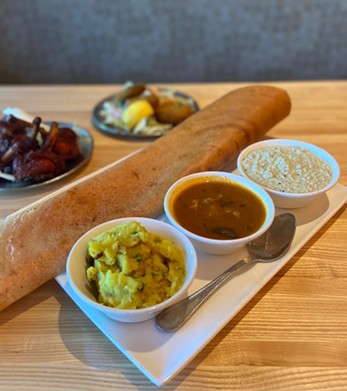