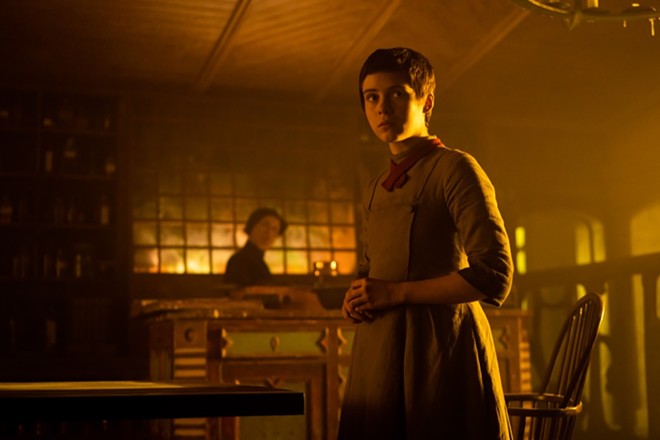 Gretel & Hansel I was going to say I'm seriously over this whole thing of remaking classic fairy tales with a "dark" slant. But then I remembered: Oh yeah, Hansel and Gretel ... not exactly a sales solicitation for Precious Moments in the first place. So fantasy horror isn't an altogether inappropriate approach for a winter flick like this one, which revisits the travails of those fabled kids who should have given the sweets a pass and taken up keto or something. Director/co-writer Oz Perkins seems a smart choice, as his previous features have concerned devil-worshipping Catholic-school girls (The Blackcoat's Daughter) and horror writers in thrall to 19th-century specters (I Am the Pretty Thing That Lives in the House). And in the role of the witch, we have Alice Krige, who paid her genre dues tormenting a bunch of New England fossils in Ghost Story. The only red flag I can see is right there in the title. See, reversing the order of the main characters wasn't just a caprice: Perkins' big idea was to make Gretel some sort of girl-power avatar by depicting her as signi-ficantly older than her brother and forever responsible for his well-being. And thus we have entered the stage at which Hollywood seems to be deliberately baiting 4chan for publicity. Be careful, folks: Toying with those guys is about as prudent as a Catholic girl summoning Satan. (PG-13)

The Rhythm Section This just in: Blake Lively is the new Jennifer Garner! Personally, I was still waiting on her to become the first Blake Lively, but life throws you a curveball sometimes. In The Rhythm Section, Lively gets her Peppermint on as a woman whose family dies in a plane crash, putting her on a quest for revenge when she learns the tragedy wasn't an accident. Part of her mission entails "assuming the identity of an assassin" – which to me would seem to necessitate actually being an assassin, if you don't want to get found out. (Hey, Joaquin: There's some method for ya!) (R)

Clemency This Sundance hit casts Alfre Woodard as a prison warden whose career of performing death-row executions has played havoc with her psyche. Now I guess the onus is on some faith-based production house to market an answer film titled Like a Baby, Thanks. (NR; playing at Regal Winter Park Village & RPX)

Color Out of Space What happens when filmmakers decide H.P. Lovecraft material isn't batshit enough on its own and needs a good strong hit of Nicolas Cage to seal the deal? You have until Thursday to find out, as the limited area engagement of this well-received adaptation makes a final lunge for your sanity. (NR; playing at Enzian Theater, Maitland)

– This story appears in the Jan. 29, 2020, print issue of Orlando Weekly. Stay on top of Central Florida news and views with our weekly Headlines newsletter.

« Movies screening in Orlando this week, including 'The Gentlemen,' '63 Up' and more   |   'Birds of Prey' brings Harley Quinn back to Orlando screens »