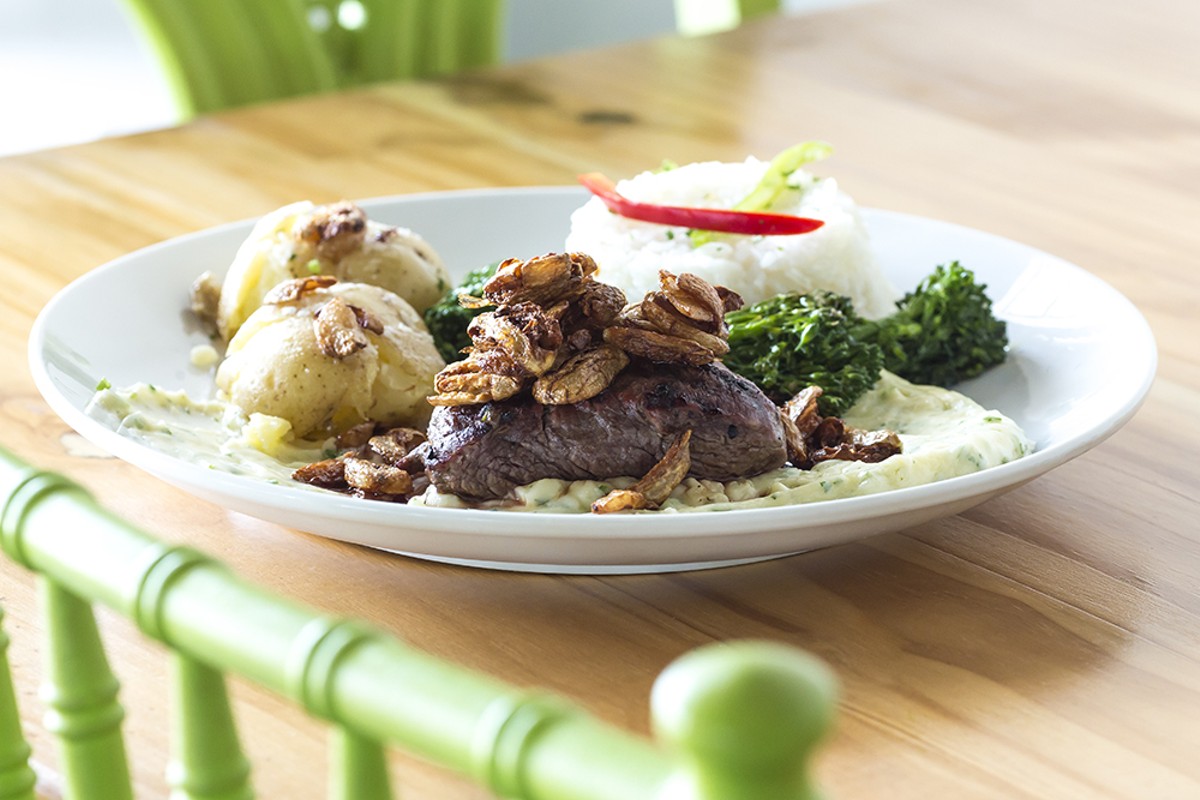 All well and good

If you build it, the Brazilians will come; at least that's the tack taken by tourist-sector eatery Green Kitchen. Driving past the restaurant a few months back, I noticed it on the ground floor of an office building and thought it an unremarkable cafeteria-type joint (à la Nature's Table) catering to brain-dead pencil pushers and sweaty IT geeks. Turns out I was wrong, partially. Workers do descend from floors above, as expected (often in a languorous and famished stupor), but are met by their temperamental opposites – the spirited Paulistano, Carioca and Brasiliense who've caught wind of the healthyish Brazilian-style lunch and (early) dinner alternatives being served. The confluence of the two results not in a culinary singularity, but in the sort of plurality we're lucky enough to experience in our city of crossroads.

In fact, mistakenly being greeted in Portuguese gave me an odd sense of pride for having passed as a Brazilian, even though ordering in English gave me away. But still. I took my number, and a seat, amid the lunchtime rush, then made time to read the scribblings on the floor-to-ceiling chalkboard: "The best project you'll ever work on is you" and "Take care of your body. It's the only place you have to live," among others.

Stuart Smalley lives, I thought to myself, just as a server handed me a glass of pineapple-mint juice (12 ounces, $5.99; 16 ounces, $6.99). While those chalky chestnuts made my eyes roll, so did the juice – with pleasure. Green Kitchen takes pride in their fruity beverages and smoothie concoctions, and well they should, but don't order the straw-testing Sunshine C Blast smoothie (12 ounces, $5.99; 16 ounces, $6.99) blended with Greek yogurt, mango, banana and orange juice as a meal accompaniment, as I did on another occasion. It's far better served as a dessert or a to-go option.

Now, the menu's life-affirming dishes (lucky you, quinoa fan!) are all well and good, but I couldn't resist the "top sirloin chef style" ($19.50). Admittedly, I felt a little naughty eating two heart-stopping slabs of picanha with parsley-heavy chimichurri, roasted potatoes and rice in front of a trio who appeared to have walked in from one of those dance-fitness classes with a vaguely exotic name. And after flagging down a friendly server to bring my dessert – a dense and sugary, egg-yolk-heavy custard with ground coconut called quindim ($3.50) – eating it felt downright Lochte-ian.

I played nice on a subsequent visit and ordered the avocado delight ($9.80), but it was an order tinged with regret. The salad, with just four thin slices of avocado, was too darn leafy. Cherry tomatoes, a few wee balls of goat cheese, a couple of basil leaves and some chia seeds were nice additions, but it needed more bite other than its drizzle of balsamic vinaigrette. Onions, perhaps. Nothing wrong with the rosemary grilled chicken sandwich on ciabatta ($9.80), but all this healthy food had me eyeing the dessert display again and ignoring, as best I could, the two presentation-only plates of grilled lime chicken with rice and cauliflower slathered in blue cheese, and a zucchini canoe filled with vegetables with the same sides. Such a wasteful practice seems antithetical to the restaurant's healthy, organic and eco-friendly ethic, but it's not like it made the diverse lures of housemade sweets – Dutch pie, baklava, Italian layer cake, strawberry mousse – any less appealing.

Truthfully, I felt somewhat buoyed by the Olympian effort it took to resist, and by Green Kitchen's salubrious air – so much so that I left the Brazilian eatery with one word on my mind: Zumba.