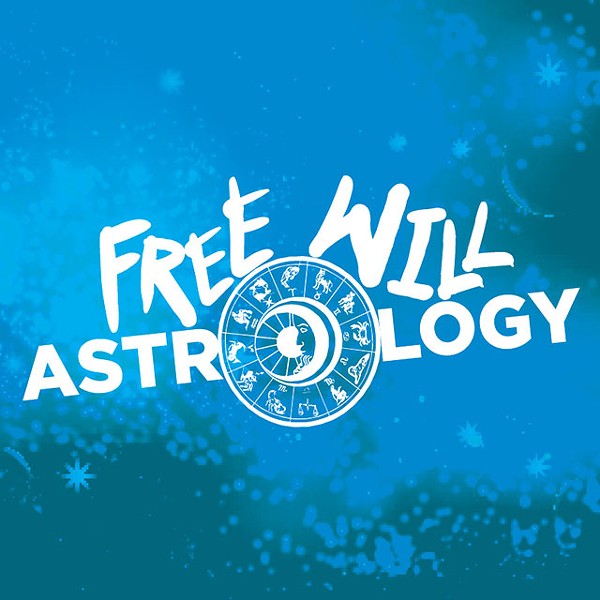 ARIES (March 21-April 19) The 19th-century Italian composer Gioachino Rossini was a prolific creator who produced 39 operas. Renowned for his lyrical melodies, he was sometimes referred to as the “Italian Mozart.” So confident was he in his abilities that he bragged he could set a laundry list to music. I trust you will have comparable aplomb in the coming weeks, since you will be asked to do the equivalent of composing an opera using a laundry list for inspiration. This will be a different challenge than making lemonade out of lemons, but it could be even more fun and interesting.

TAURUS (April 20-May 20) Is the grass really greener on the other side of the fence? Or is its more vivid hue just an optical illusion caused by your inability to see the situation objectively? Judging from my analysis of your current astrological omens, I suspect that you’re not deluded. The grass really is greener. But it’s important to note the reason why this is true, which is that there’s more manure over on the other side of the fence. So your next question becomes: Are you willing to put up with more crap in order to get the benefits of the greener grass?

GEMINI (May 21-June 20) You know the voice in your head that’s kind of a sneaky bastard? The voice that sometimes feeds you questionable advice and unreliable theories? Well, I suspect that this voice might be extra active in the coming week. But here’s the weird thing: It might actually have a sound idea or two for you to consider acting on. For once, its counsel may be based on accurate intuition. So don’t completely lower your guard. Maintain a high degree of discernment towards the sneaky bastard’s pronouncements. But also be willing to consider the possibility that this generator of so much mischief could at least temporarily be a source of wisdom.

CANCER (June 21-July 22) We keep million-dollar works of art in well-guarded museums. Paintings created hundreds of years ago are treated with reverence and protected as if they were magical treasures. Meanwhile, beautiful creatures that took nature eons to produce don’t get the same care. At least 5,000 animal and plant species are going extinct every year, in large part due to human activities. Among the recently lost works of art are the Madeiran Large White butterfly, West African black rhinoceros, Formosan clouded leopard, golden toad and Tecopa pupfish. I’m asking you not to allow a similar discrepancy in your own life. The astrological omens say that now is a perfect moment to intensify your love for the natural world. I urge you to meditate on how crucial it is to nurture your interconnectedness with all of life, not just the civilized part.

LEO (July 23-Aug. 22) Hurry up, please. It’s time. No more waffling or procrastinating. You really need to finish up the old business that has dragged on too long. You really should come to definitive decisions about ambiguous situations, even if they show no sign of resolution. As for those nagging questions that have yielded no useful answers: I suggest you replace them with different questions. And how about those connections that have been draining your energy? Re-evaluate whether they are worth trying to fix.

VIRGO (Aug. 23-Sept. 22) “This morning I walked to the place where the street-cleaners dump the rubbish,” wrote painter Vincent van Gogh in one his letters. “My God, it was beautiful.” Was he being ironic or sarcastic? Not at all. He was sincere. As an artist, he had trained himself to be intrigued by scenes that other people dismissed as ugly or irrelevant. His sense of wonder was fully awake. He could find meaning and even enchantment anywhere. Your next assignment – should you choose to accept it – is to experiment with seeing the world as van Gogh did.

LIBRA (Sept. 23-Oct. 22) I believe you will undergo a kind of graduation in the next four weeks. Graduation from what? Maybe from a life lesson you’ve been studying for a while or from an institution that has given you all it can. Perhaps you will climax your involvement with a situation that has made big demands on you. I suspect that during this time of completion you will have major mixed feelings, ranging from sadness that a chapter of your story is coming to an end to profound gratification at how much you have grown during this chapter.

SCORPIO (Oct. 23-Nov. 21) What’s your favorite sin? I’m talking about the mischievous vice or rebel tendency or excessive behavior that has taught you a lot. It may be the case that now and then this transgressive departure from normalcy has had redeeming value, and has even generated some interesting fun. Perhaps it puts you in touch with a magic that generates important changes, even if it also exacts a toll on you. Whatever your “favorite sin” is, I’m guessing that you need to develop a more conscious and mature relationship with it. The time has come for it to evolve.

SAGITTARIUS (Nov. 22-Dec. 21) The Sagittarian writer and artist William Blake [1757 to 1827] made drawings of many eminent people who had died before he was born. Julius Caesar was the subject of one of his portraits. Others included Dante, Shakespeare and Moses. How did Blake manage to capture their likenesses in such great detail? He said their spirits visited him in the form of apparitions. Really? I suppose that’s possible. But it’s also important to note that he had a robust and exquisite imagination. I suspect that in the coming weeks you, too, will have an exceptional ability to visualize things in your mind’s eye. Maybe not with the gaudy skill of Blake, but potent nevertheless. What would be the best use of this magic power?

CAPRICORN (Dec. 22-Jan. 19) How close do you really want to be to the people you care about? I invite you to think about this with unsentimental candor. Do you prefer there to be some distance between you? Are you secretly glad there’s a buffer zone that prevents you from being too profoundly engaged? I’m not saying that’s a bad thing. It might be correct for who you are right now. I merely want to suggest that it’s important for you to know the exact nature of your need for intimacy. If you find that you actually do want to be closer, spend the next four weeks making that happen. Ask your precious allies to collaborate with you in going deeper.

AQUARIUS (Jan. 20-Feb. 18) I love your big, energetic thoughts. I enjoy watching as your wild intuitive leaps lead you to understandings that mere logic could never produce. I have benefited many times from the Aquarian tribe’s ability to see angles no one else can discern. In the immediate future, though, I hope you will be a specialist in analyzing the details and mastering mundane mysteries. I’ll be rooting for you to think small and be precise. Can you manage that? I expect there’ll be a sweet reward. You will generate good fortune for yourself by being practical, sensible and earthy.

PISCES (Feb. 19-March 20) Is it a river or a creek? Is it a mountain or a hill? It’s important for you to decide questions like these – preferably on the basis of the actual evidence rather than on wishful thinking. I’m not saying that the river is better than the creek or that the mountain is better than the hill. I simply want you to know that it’s important to be clear about which it is. The same principle applies to other experiences you’ll soon have. Is the catalytic person you’re dealing with a temporary friend or a loyal ally? Is the creation you’re nurturing just a healthy diversion or is it potentially a pivotal element in transforming your relationship with yourself? Is the love that’s blooming a transient pleasure or a powerful upgrade that’s worth working on with all your ingenuity?