Why are female U.S. Soccer team players paid a fraction of what their male counterparts make?

As the Orlando Pride women's soccer team won an exciting home opener on April 23 against the Houston Dash to a chorus of whoops and hollers from a record-breaking 23,403 fans, a handmade sign reminded everyone in the stadium that one thing was – and still is – unsettled.

"EQUAL PAY FOR EQUAL PLAY," read a white banner held up by fans near the back of the stadium.

The public's focus on pay equity in soccer was localized after Orlando Pride's star forward, Alex Morgan, and four other players on the U.S. Women's National Team filed a federal complaint against U.S. Soccer for wage discrimination, alleging they earned "as little as 40 percent" of what the U.S. Men's National Team earned, despite the women's team winning its third FIFA world cup last year (something their male counterparts have never done). Morgan, Carli Lloyd, Becky Sauerbrunn, Megan Rapinoe and Hope Solo argued in the complaint that their team is "the driving economic force for U.S. Soccer, the governing body for the sport in America, even as its players are paid far less than their counterparts on the men's national team," according to their lawyer, Jeffrey Kessler.

"We have dedicated our lives to this sport and our country, and we love our fans and the happiness this game has brought our team," Morgan wrote in Cosmopolitan magazine, published 10 days before that match against the Dash. "We think it's time for U.S. soccer to truly address the inequality and do what is right."

Before you dive into the figures surrounding the disparity, it's important to note that the two teams operate under different structures due to their respective collective bargaining agreements. 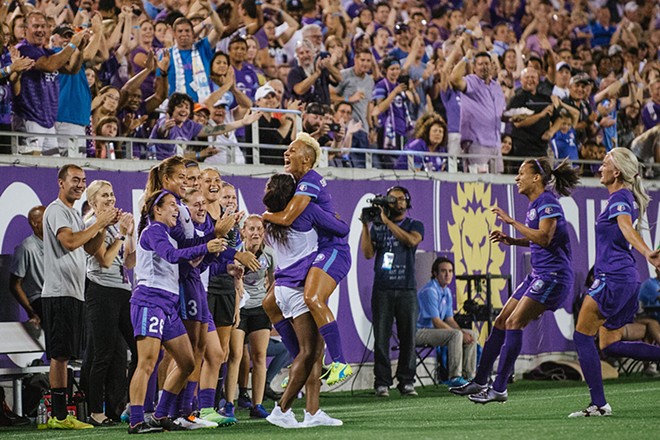 The New York Times reports that the World Cup pay structure is so skewed that "in 2015, the women's team earned $2 million for winning the World Cup while the men made $9 million without advancing beyond the round of 16 in 2014."

The revenue argument also doesn't explain why the women's team is allowed to play on artificial turf, why they have smaller per diem allowances or why they get paid less for sponsor appearances. U.S. Soccer has said it was "disappointed" in the players' actions and contends that between top male and female players, the wage gap is only 2.2 percent less for women.

"Our beef is not with the men's national team," Lloyd says in an essay for the NYT. "We love those guys, and we support those guys. It's with the federation, and its history of treating us as if we should be happy that we are professional players and not working in the kitchen or scrubbing the locker room."

U.S. Soccer also pays the salaries of USWNT players who play for National Women's Soccer League teams, like the Orlando Pride. A player like Morgan or Solo, members of the national team, can get paid $56,000. But NWSL players who aren't on the national team can earn salaries ranging from $7,200 to $39,700 for a six-month season. The salary cap for a team is $278,000, which does not include allocated players. The men's Major League Soccer (MLS) salary cap for a team (including the Orlando City Soccer Club) is currently $3.66 million, but loopholes also allow teams to sign players outside of that salary cap. That's what allows a designated player like Kaká to be paid almost $7.2 million in a base salary and bonuses. The salary range for non-designated players starts at $51,500 and goes to $457,500, not including team bonuses.

Orlando Weekly reached out to representatives from Orlando City and Orlando Pride for comment, but did not receive a response by press time.

A recent story by the New York Times found that some NWSL players have to find side jobs because the majority of them don't get the extra pay from playing for the national team. Ashley Nick, a midfielder for New Jersey's Sky Blue FC, told NYT she supplemented her earnings by modeling and babysitting, while other players worked in coffee shops. The Oregonian reported two years ago that Portland Thorns players were taking outside jobs such as teaching classes or coaching youth teams to supplement their income.

"The meager salaries make playing in the NWSL a labor of love as they sacrifice a living wage in hopes of seeing a U.S. women's professional soccer league finally succeed," the newspaper reported.

Local artist and teacher Lesley Silvia, who considers herself an Orlando City and Orlando Pride fan, says she's noticed some subtle differences in the way the two teams are treated at games, even though they bring the same passion to the field.

"For the Pride, they didn't bring the fireworks, the DJs or the glitter cannons they bring for the men," she says. "The supporters themselves were trying to rev up the crowd by making up chants and bringing in their own streamers."

Silvia says she noticed a similar discrepancy with Pride gear. For a while, the only team swag she could find to buy was a car magnet – and she searched unsuccessfully at an Orlando City game for Pride jerseys and scarves when the women's team was first announced.

"This is the first year we have a women's team, and I think a lot of people are just happy about that," she says. "They don't want to make any demands yet."

Amanda Anthony, a assistant professor of sociology at the University of Central Florida, agrees on this last aspect.

"Orlando Pride is a pretty new team," she says. "Some might consider it a bold stance to take that early on. They might be more concerned with establishing it first and building their reputation around the game itself."

Anthony says Morgan and the other four members who filed a complaint against U.S. Soccer are part of the larger national conversation surrounding the stagnating gender wage gap. A recent Cornell study found that women earn 79 percent of what men earn on an hourly basis, and while most of that gap has to do with gender differences in industry, occupation and caregiving roles played at home, researches found an 8 percent gap that can't be accounted for by measured factors. The New York Times reported on another study this year that found when large numbers of women enter jobs traditionally held by men, the pay declines.

Anthony adds that people who criticize players for complaining about their salaries because it's higher than the salary of the average American worker derail the conversation surrounding the wage gap in soccer. That argument expects women to be grateful, and trivializes the overarching topic: Society still privileges men's sports over women's sports.

"As celebrities, the players can get some of the conversation going to a certain extent," she says. "Women and men have the same overall expectations in soccer. If you're expected to do the same job, you should be expected to do it with the same pay."

Email us at [email protected]weekly.com.

« As Donald Trump searches for a running mate, Florida Gov. Rick Scott trumps others on the shortlist   |   Florida probably won't be prepared to battle Zika »