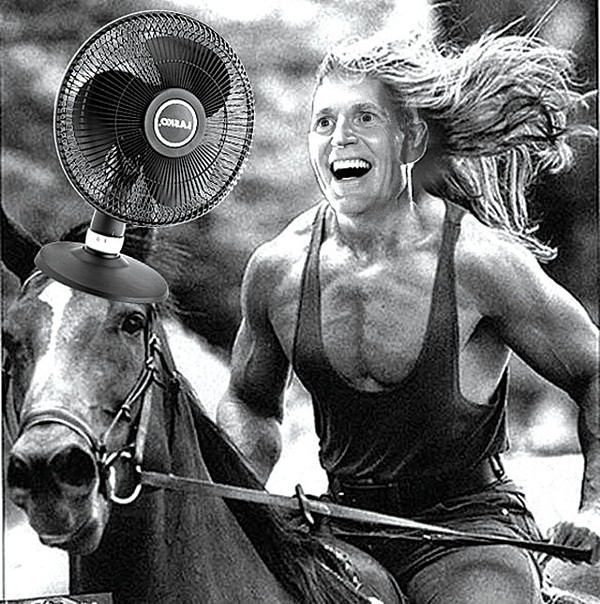 “Charlie Crist can bring his fan, microwave and toaster to debates — none of that will cover up how sad his record as governor was compared to the success of Rick Scott. Crist should buy a fan for the 832,000 Floridians who lost their jobs while he was governor.”

– Gov. Rick Scott in a statement about #fangate

Amount of federal dollars Gov. Rick Scott refused to build high-speed rail between Orlando and Tampa, which would have created a projected 23,000 jobs

Number of minutes before Gov. Rick Scott took the stage after Charlie Crist and his electric fan did at the televised Oct. 15 gubernatorial debate

Perhaps because national embarrassment of the “Florida Man” variety becomes us so much, or maybe because of the human-centipede-like tail-chasing that has come to define politics in Florida (particularly in this year’s gubernatorial stakes), that extended dance mix of suspended disbelief that came at the start of last week’s debate between Gov. Rick Scott and former Gov. Charlie Crist (a Democrat at present, for those keeping score) wasn’t so surprising when it played out on Oct. 15. Seven minutes of staged absence is a lifetime in political years.

In terms of “scandal,” though, it felt a bit like the expected pantomime of your 8-year-old British half-brother on a candy bender. We, too, have been waiting for the sky to fall, Chicken Little. Scott has enlisted California attorneys to protect his Google accounts from his 2011 transition into governance, is now facing a lawsuit from Democratic attorney general candidate George Sheldon over hundreds of millions in unreported finances allegedly spread out over eight blind trusts, has refused to discuss his private airplane dalliances (even after making a stink about getting rid of state planes) and has generally looked like a pariah, right down to the self-loathing “he wants you to hate me” hairshirt he’s been wearing on television of late. The shit was bound to hit the fan.

But who knew the fan was going to hit the shit? Seriously, after some contentious examinations by debate organizers and those in basements with comfy chairs, it still remains unclear whether Crist – who has notoriously required fans for all of his public appearances, because sweat rings and vanity and Nixon – broke some cardinal rule by showing up with a tiny podium fan on Wednesday night. Apparently, the debate rules said fans were forbidden on the stage, but Crist’s campaign had written in an addendum to the rules specifying that fans would be permitted if needed to control temperature issues in the room. This is the kind of pedantry we don’t expect from our bobbling figureheads.

On issues of substance, though, the debate to end all debates was an expected yawn of everything you already know: Scott is against gay rights, he is against women’s rights, he is proud of his tuition positioning (though he cut $1.3 billion for public schools in 2011 and $300 million from universities the year after), he loves the word “jobs” (and unemployment numbers on Oct. 17 showed that Florida unemployment had dipped to 6.1 percent, the lowest since 2008; hooray for fast food!).

Crist, well, he’s the guy who felt like the blurry horizon then and now: just there, moderate, somehow bland, yet likable. We don’t yet have our endorsement pants sewn, but it’s worth pointing out that there was one person out on that stage for seven minutes and that one person was not the official currently elected as your governor. And when Scott did take the stage, he didn’t even name the fan as the excuse. For the ongoing fallout, Scott has blamed the staff of the event, his own staff, Crist for not being there (when he was) and everything but Mercury in retrograde for his shameful showing. To be fair, there are a series of documents that stipulate no “electronic” devices “including fans” were allowed; however, there are also documents that show the Crist staff saying that, unless it was cool under those hot lights, a fan would be present. Event organizers have since called 67 degrees – perhaps the perfect temperature – as the indicator of coolness, seeing as the hall at Broward College is super new and all that. Cool, right?

Don’t get us wrong. We don’t take rules lightly. Barring the fact that electronic and electric are separate designations – also, like we said, there’s never been a Charlie without a fan in the 8 years we’ve been covering him – even Scott has been confessing to the foolishness of the whole dustup. Or, rather, has been just as foolish as he was at said debate.

Damage control wasn’t much better. “Rick Scott never refused to take the stage and debate,” Melissa Sellers, Scott’s campaign manager, said according to website Politico. “In fact, our campaign was not notified Charlie had even taken the stage because the last we heard, Crist was in an ‘emergency meeting’ with debate organizers pleading for his precious fan.”

The next day, Scott exhibited his signature stammer and fail for CNN’s cameras. “I was anxious to get out there,” he told hairball Wolf Blitzer. “I wanted to talk – you know, we did a debate last weekend.  He didn’t like talking about 832,000 jobs lost.  So I think he was just – he was just worried he was going to sweat.  I’m surprised he just didn’t bring some dry ice with him or something to keep himself cool, because he worried so much when I keep – kept bringing up that he’d lost 832,000 jobs.  But we – I came out and we did the debate.  He – you know, he didn’t want to talk about jobs.  We talked about jobs and education.”

Even heavyweight Tallahassee reporters like the Miami Herald’s Marc Caputo were tweeting about Republicans giving up backstage, because maybe this time we finally know how terrible Scott is at public appearances? Oh, wait. He’s the victim. We’re just being encouraged to hate him.

“Privately, Republicans/Rick Scott loyalists are telling me the moment he didn’t go onstage over fangate was the moment he lost the election,” Caputo tweeted.

With another debate scheduled for Oct. 21 – while this paper is at the press in an old-timey manner – who knows what the remaining manufactured wind will stir up? Likely it will involve more pointing in the direction of historic Medicare fraud and the resulting fines, the lack of Medicaid expansion for 800,000 needy Floridians and general dystopian blinking at what we used to call “trickle-down economics” as they pertain to our current apocalypse. Or, perhaps, it will still be about a small electric fan. Blow, wind, blow.