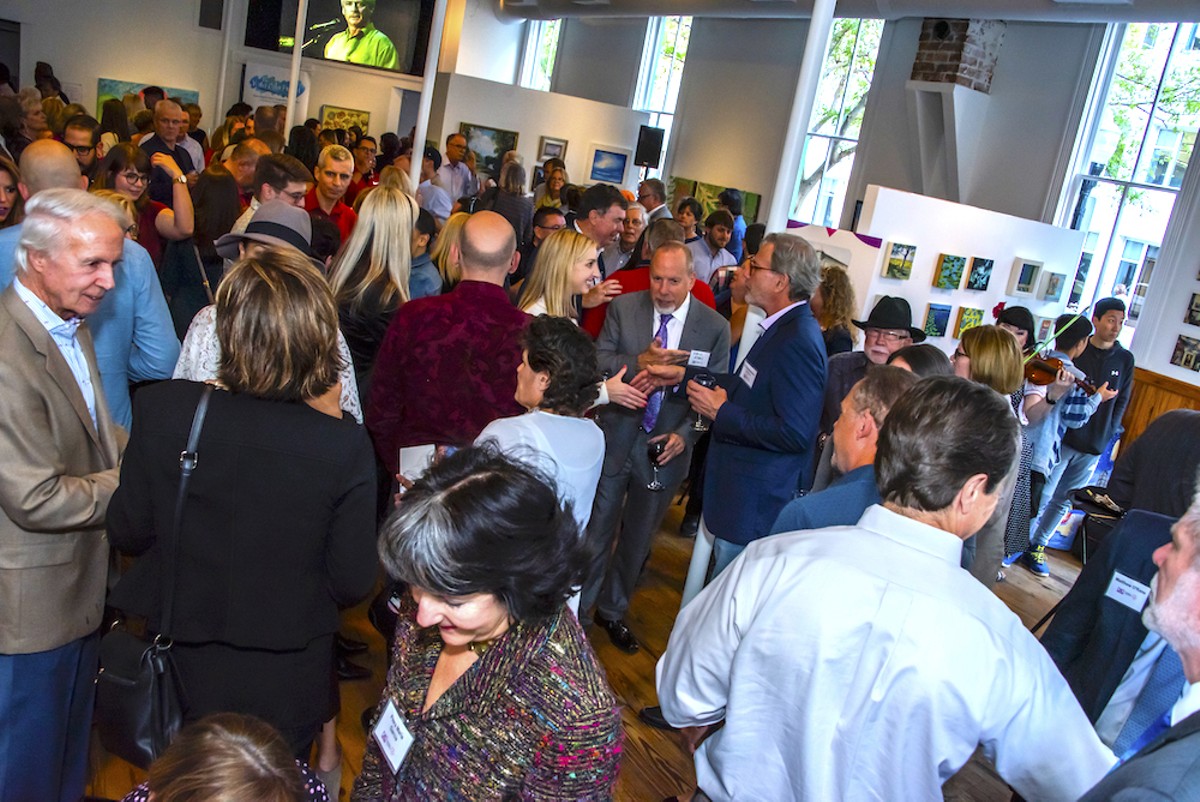 Over the last 130-odd years, it's been known as the Old English Club, the Cosmopolitan Club, Democratic Party headquarters, Mad Cow Theatre, DMAC, and most recently the Gallery at Avalon Island. But on Thursday, March 21, downtown Orlando's historic Rogers Kiene Building was officially rededicated as the new CityArts, centerpiece of the Downtown Arts District's attempt to support artists in our city's central core.

Nearly 14 months after property owner Ford Kiene announced he was donating the nationally registered landmark to the City of Orlando, under the stipulation that it be used for cultural purposes though at least 2038, the latest incarnation of CityArts is almost ready for its debut. While the official opening ceremony — led by Orlando Mayor Buddy Dyer, Downtown Arts District Board Chair Jim Lussier and Orlando City Commissioners — didn't occur until later last week, the public was invited into the freshly refurbished space last Tuesday night for the return of the In-Between Series.

Originally established about five years ago by former Gallery at Avalon Island curator Patrick Greene, the In-Between Series was begun to take advantage of downtime between regular art exhibits, but it has become a showcase for unconventional musical acts. While we waited for the show to start, curator Chris Belt and I sat next door at the Harp & Celt, where he shared with me his vision for the series over a couple post-St. Paddy's Day pints of Guinness.

"New work, new space, new collaborators. It's exciting!" says Belt, founder of the Accidental Music Festival and executive director of the Timucua Foundation, who returned to Orlando in 2016 after a three-year stint in New York. "I wanted to carry on the same basic idea that Pat had, of experimental and improvised challenging music, but with more of an emphasis on collaboration and new work."

For example, last week's In-Between session melded electronic music by Elizabeth A. Baker with modern movement from Voci Dance [full disclosure: my wife's company]. Baker describes herself as "a new renaissance artist," and Belt says "her work goes beyond being a performer or composer or choreographer or dancer; she does all of these things" in addition to writing books, speaking, and consulting for arts organizations about representation and diversity.

Belt says he's "very excited to have the space back in Orlando's cultural life," and after touring the building with DAD executive director Barbara Hartley, it isn't hard to share the enthusiasm.

"It's been a learning process," Hartley confided to me in reference to the renovations, which were accomplished with help from Baker Barrios Architects and Austin Commercial. "You have a budget, and what I've learned is that the budgets always go over, and the time frames always go over." Even so, phase one of the building's first major refurbishment in 19 years — featuring clean white paint, bright track lighting, and a general "freshening up" of the facilities — is almost complete, at a cost of $50,000.

Phase 2 of CityArts Factory's rebirth will include redone restrooms, enhanced audiovisual equipment, and a "Creative Café" on the first floor, which is hoped to operate six days a week beginning in early summer. Upstairs, the old risers and heavy window coverings have been demolished, revealing a spacious, modern-looking venue that should start hosting a cinema series and other performances by July. And a proposed third phase (fundraising permitting) would clean up and "activate" the building's exterior with sound and lighting equipment, transforming an unlovely alleyway into a social gathering spot.

Of course, the most important components of the new CityArts Factory are the five gallery spaces, which include two Signature galleries, the Spotlight gallery, Orlando Magic's Young Artists gallery, and the urban-inspired Redefine gallery, which is currently exhibiting Attachment Hunger with Scott Donald and Sean Hartman. During the spring and summer of 2019, the facility will focus on female curators, including Flynn Dobbs, Wanda Raimundi-Ortiz Klotz, Gisela Carbonell, Sorcha Baty and Rangsook Yoon, who will present a mix of local and national talent.

What excites Hartley most are the possibilities presented by the building's fully furnished apartment, which will host CityArts' new artists-in-residency program. "September will be our first by-invitation artist-in-residence," Hartley says, "and then we'll have a process that we announce next year for people who want to apply." Chris Seaber, a classically trained contemporary artist and lecturer from England, whose work is "connecting the east with the west," according to Hartley, will be the first participant for two or three weeks this fall.

CityArts may have a new address, but as Hartley says, "The mission is the same: to grow the arts in downtown. What's new and exciting is the possibilities of bringing in the artists-in-residence program. I call it an ecosystem; we started out in one place and we've grown. I think we've served a certain role in bringing art downtown, and now we're trying to elevate the status of local artists while also bringing in some international artists." The bottom line for Hartley and her team? "We just want our city to be cool for artists and for visitors."

« Orlando playwright Tod Kimbro's 2008 sci-fi musical 'Wasteland' turned out to be oddly prescient   |   'An Audience With Adrian LePeltier' was a politically incorrect, obscenity-laced look into the celebrated Orlando actor's life »