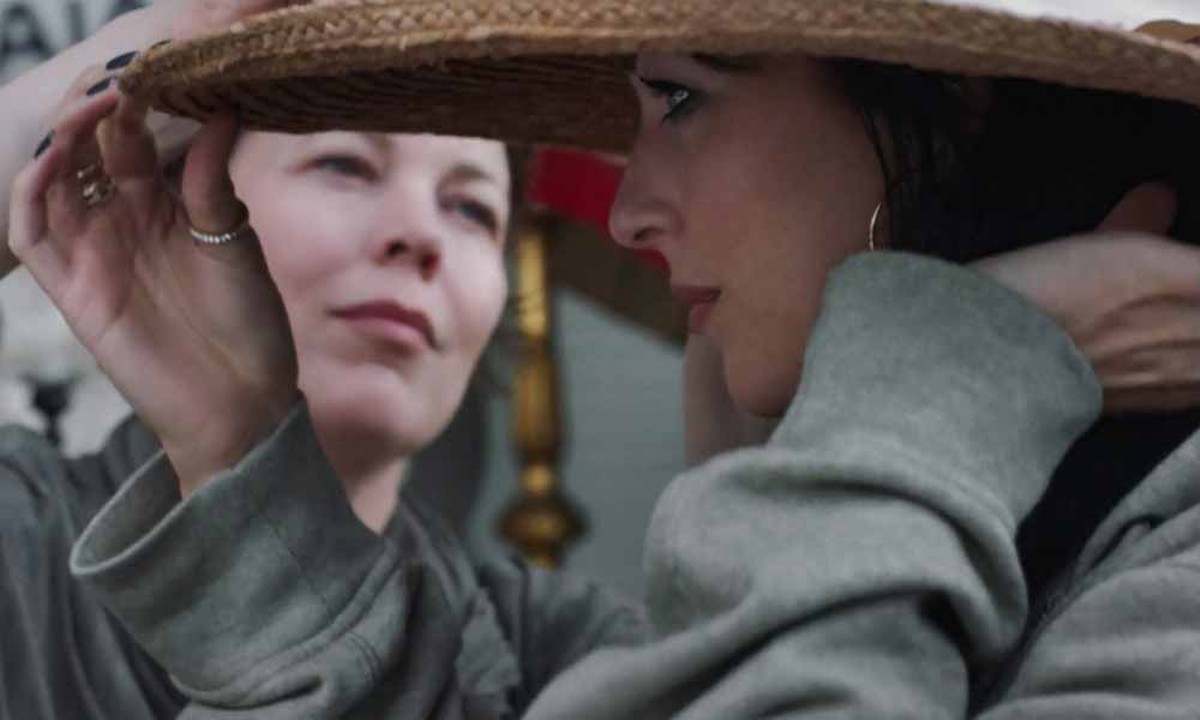 Olivia Colman and Dakota Johnson in "The Lost Daughter"

Anxious People — The best-selling book by Fredrik Blackman becomes a Swedish comedy/mystery series about eight survivors of a hostage incident, all of whom have differing recollections of the event. That's right, just like what happened when you and your friends settled in to watch Annie Live! (Netflix)

Crime Scene: The Times Square Killer — Season 2 of Joe Berlinger's location-specific true-crime docuseries shifts its focus from California all the way to the other side of the country, exploring a spate of killings that exposed the vulnerability of New York's sex workers in the late 1970s. This, of course, was before Rudy Giuliani took office and came up with the novel solution of just having them all shot preemptively. (Netflix)

Star Wars: The Book of Boba Fett — The Season 2 finale of The Mandalorian positioned good old Boba as heir apparent to Jabba the Hutt's criminal empire. (Kind of the way Gov. DeSantis sees himself, only in space.) This spinoff series will both explore that possibility and delve into the title character's past — which should give canon junkies plenty of opportunities to look for continuity errors, which if we're being honest is all they live for. Me, I'm too busy trying to figure out what the name of Boba's sidekick, Fennec Shand, is an anagram for. Because you know it's gotta be something. (Disney+)

Kitz — The location: a ski slope where the affluent party kids of Europe come to live it up. The protagonist: a humble townie searching for her sister's killer. The language: German. Hmmm, something tells me The Sex Lives of College Girls won't be getting any competition in the laughs-per-minute department. (Netflix)

'80s Top 10 — Rob Lowe hosts a six-episode retrospective that seems to be targeted at people who fondly recall the Top Gun Decade yet are somehow too young to remember VH1's I Love the '80s. In other words, Schrödinger's Stray Cats. (Disney+)

Cobra Kai — Speaking of '80s nostalgia, Season 4 of the Karate Kid spinoff series shows what happens when the cooperative efforts of Daniel and Johnny inspire the return of old nemesis Terry Silver. There are also big changes afoot that may alter the nature of the All Valley Under-18 Karate Championships forever. My instinct is to expect the arrival of a trans competitor nobody knows what to do with, but I guess that's because my roots are in The Bad News Bears instead. (Netflix)

The Lost Daughter — For her acclaimed directorial debut, Maggie Gyllenhaal has chosen to adapt Elena Ferrante's novel about a college professor (Olivia Colman) who channels her personal frustrations into an obsession with a mother-daughter duo she meets on vacation. Careful about idealizing motherhood, Livy! On the outside, it looks like the greatest experience of your life, but from what I've heard, on the inside it's just endless screaming and Peppa Pig. (Netflix)

Queer Eye — Season 6 takes the boys to Texas, where they'll help the locals look their very best while fulfilling what I call the Full Metal Jacket Prophecy. Because as Gunnery Sergeant Hartman told us, there are only two things to be found in the Lone Star State: One is steers, and the other is right there in the title. Don't you just love it when a military insult becomes empowerment programming? (Netflix)

Seal Team — Patrick Warburton, J.K. Simmons and Kristen Schaal lend their voices to an animated tale of valiant seals who have to protect their underwater turf from a gang of sharks. Scoff if you want, but until Omicron dies down, this is the closest I'm getting to West Side Story. (Netflix)

Stay Close — Stop me if you've heard this one: A photojournalist, a mother of three and a detective walk into a bar. OK, it isn't a bar; it's another adaptation of a Harlan Coben novel. But all three characters are hiding dark secrets, which has to make for a laff riot, right? All right, maybe not. What we do know is that the action has been switched from the Atlantic City, New Jersey of the novel to Manchester, England. Strangely, I've never thought of them as sister cities. But now I'm preoccupied with the image of Morrissey getting rubbed out on Boardwalk Empire. (Netflix)

« ‘Emily in Paris,’ Darren Star’s second-most annoying creation, returns for a second season   |   Italian romcom ‘Four to Dinner,’ like a mash-up of ‘Sliding Doors’ and ‘Friends,’ premieres Wednesday on Netflix »