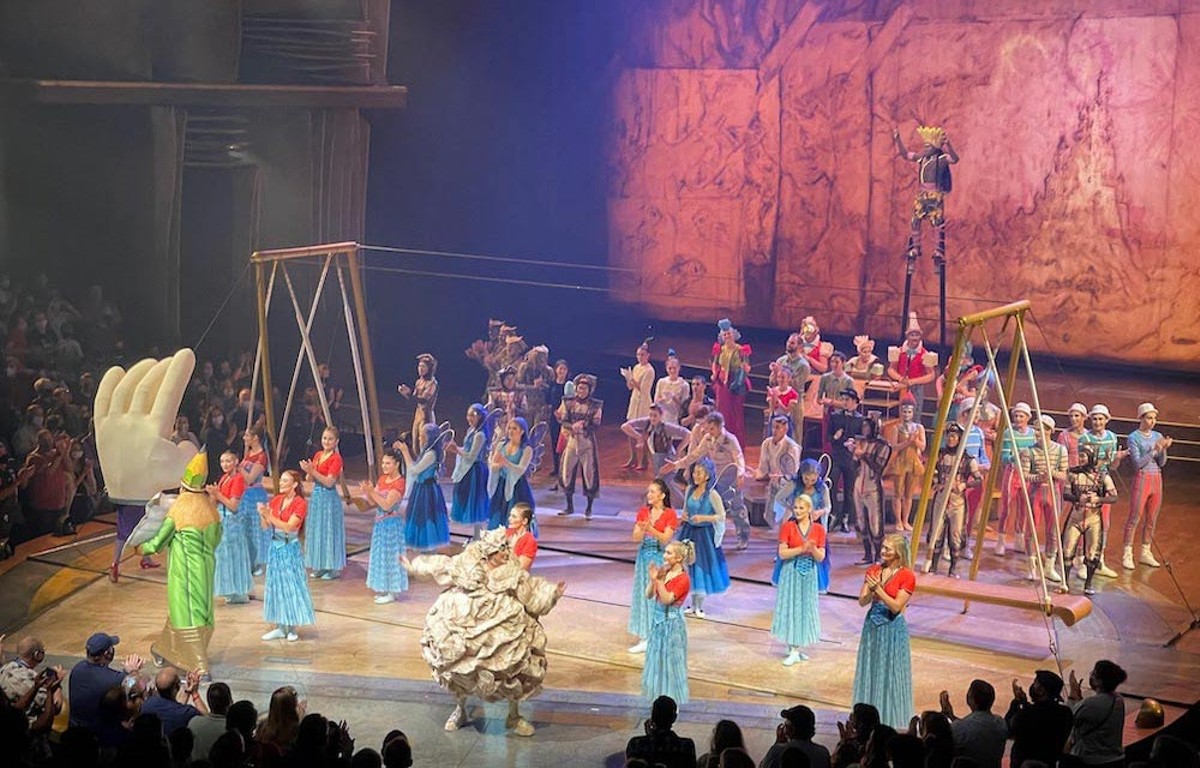 I hope you haven't already had your fill of attraction updates, because the recent IAAPA Expo dovetailed directly into Destination D23, the first in-person event in over 18 months from the official Disney fan club. The weekend-long event, which took over the Contemporary Resort's convention center, was a curious combination of nostalgia-soaked reunion celebrating Walt Disney World's 50th anniversary — including a fascinating mini-museum of cast-offs from extinct attractions — coupled with a hard-sell infomercial advertising products from Mickey's ever-expanding empire.

We learned that Epcot's Guardians of the Galaxy coaster, which will feature Glenn Close reprising her role as Nova Prime, is opening in the vague window of "summer 2022," while there's still no word on when the Magic Kingdom's Tron coaster will debut. The most newsworthy moment came when D'Amaro doubled down on insisting that the lightsaber guests will see (but not touch) inside the Star Wars hotel is "real," igniting the brilliant blue blade to rapturous applause ... and then gingerly cradling the hilt like a newborn baby, until an assistant carried it offstage.

Subsequent sessions about new and upcoming park additions were similarly unrevealing. For example, a Star Wars discussion hosted by Her Universe founder Ashley Eckstein dropped new tidbits about the costumes and food coming to the Galactic Starcruiser, but lead designer Scott Trowbridge seemed noticeably less candid than he had been during his IAAPA appearance a few days prior. My big takeaway: All the innovations we were originally promised would be included in Galaxy's Edge — like interactive droids, immersive dining and persistent role-playing — are finally arriving, but they'll be hidden away behind the amusement industry's most expensive paywall.

Although Destination D23 may have been a bust in terms of breaking news, it was at its best when looking backwards. "Weird Disney" and a trio of decade-themed presentations unearthed uncomfortable archival footage of WDW's early years ranging from a creepy 1970s Eastern Airlines commercial to interpretive dancers at Disney/MGM Studios' grand opening. Better still, Disney legend Dick Nunis demonstrated that at nearly 90 he's still as sharp as he was when he went to work for Walt in 1955, defending his infamous business-casual Bermuda shorts to head archivist Becky Cline and calling her department a bunch of "idiots."

Sadly, such spontaneous gems were few and far between amid slickly produced, tightly scripted presentations, and even they were fated to fade from memory since attendees were forbidden from making recordings. (I found myself sitting near noted Disney historian Jim Korkis, who was furiously taking handwritten notes while I tweeted highlights.)

Ironically, the weekend's most startling announcement dropped hours after Destination D23 ended, as Walt Disney World paused sales of most annual passes. To be frank, I probably should have saved myself several hundred dollars in registration fees by staying home and watching Disney's free livestream of the proceedings. I would have missed out on some free swag and exclusive shopping, but I would also have avoided the traumatic daily trek from the Transportation and Ticket Center, which is still frustratingly tram-free.

Perhaps the peak of my entire Destination D23 experience — aside from the live onstage appearance by Kermit the Frog — came the evening before the event officially kicked off, with an opening weekend performance of Cirque du Soleil's Drawn to Life at Disney Springs. Originally slated to debut days before the pandemic struck, this long-awaited replacement for the beloved La Nouba follows a young girl who finds her late father's enchanted animator's desk and falls into a dreamscape inspired by Disney classics.

The international circus acts Cirque has assembled are once again breathtaking, but this time they've been cleverly themed around vintage cartoons and the basic principles of hand-drawn animation. A troupe of bouncing acrobats demonstrate "squash and stretch"; a trapeze-like swing swirls with projected brushstrokes plucked straight from Mary Blair's vibrant paintings; and the terrifying spinning "double wheel" is transformed into the windmill from 1937's The Old Mill. At times, the flawless blend of athletic artistry and cutting-edge stagecraft nearly brought me to tears, such as during a romantic zero-gravity dance duet. Other moments made me laugh out loud, like when a drawing desk came to life and galloped away like a pony.

Almost all of Drawn to Life's direct references to Disney are integrated delicately, including original "pencil test" animations supervised by veteran director Eric Goldberg and subtle nods to familiar films woven into the costumes and musical scores.

Unfortunately, it seems someone behind the scenes lost confidence in Orlando audiences' ability to appreciate a nonverbal narrative, leading Cirque's cast to break their cardinal rule and speak English (instead of their usual charming gibberish) during several unnecessarily verbose sequences. Worse, there are a couple of egregious transitions filled with shameless mugging and self-referential quotes that feel like the work of someone from the theme parks' entertainment department, instead of writer-director Michel Laprise.

Drawn to Life's tonally jarring missteps — which could easily be edited out — briefly broke the magic spell that Cirque du Soleil's best shows (such as Love and Mystere in Las Vegas) always cast over me, but a B-plus production by Cirque is still miles ahead of almost everyone else's best efforts.

My critiques aside, La Nouba's successor is worth the price of admission, as long as you don't pay extra for the seats down front. Like so many things at Disney, this show looks best with a little distance.