Racing to Zero: In Pursuit of Zero Waste

We’re loving the schedule of film events coming together for fall. From heavy-hitting documentaries screening at the South Asian Film Festival and Global Peace Film Festival, to the cult classics showing at the Enzian (Shaun of the Dead! Léon: The Professional!), to the horror film screenings and mini-fests leading up to Halloween, there’s film fare for every taste. Not up for spending your beautiful fall evenings indoors? Head to Leu Gardens, the lawn at the Enzian or Central Park in Winter Park, all of which host outdoor movie nights this fall. Keep checking our online calendar for more film listings and cinema events.

Oct. 3: Among the Believers
One of the most topical documentaries screening in town this season, this film follows Abdul Aziz Ghazi, a charismatic Islamic cleric who dreams of turning the nation of Pakistan into a Muslim utopia, as well as two teens who attended his schools. One decides to become a jihadi preacher; the other leaves radical Islam behind and tries to lead a normal life in Pakistan. Ghazi’s crusade seems to be gaining some momentum, until 132 children are brutally murdered in a Taliban attack and the public turns on Ghazi. When this film screened at the Tribeca Film Festival, reviewers called it “intimate and brutally honest.”
1:45 p.m. | Enzian, 1300 S. Orlando Ave., Maitland | $11 | 407-629-0054 | enzian.org 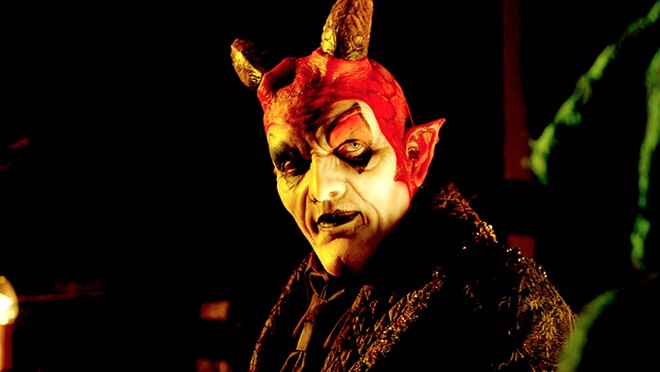 Oct. 6: Alleluia! The Devil’s Carnival
Paul Sorvino plays God in this freakish fantasy-musical film franchise by Darren Lynn Bousman (Saw II, Saw III, Saw IV) and Terrance Zdunich (Repo! The Genetic Opera). This is the sequel to their short film, The Devil’s Carnival, and in this feature-length followup, Lucifer sets a plot in motion against Heaven and all hell breaks loose. The film is being toured around the country for one-night-only performances, like a traveling road show, and audience members are encouraged to dress up and participate, a la Rocky Horror Picture Show. Every screening will feature a local opening act, a Q&A with the filmmakers, merchandise for sale and (we’re sure) some surprises.
7 p.m. | Garden Theatre, 160 W. Plant St., Winter Garden | $20-$60 | 407-877-4736 | thedevilscarnival.com

Sundays: Fear the Walking Dead and The Walking Dead watch parties
Walking Dead fans rejoiced when it was announced that there was going to be a spinoff of the AMC zombie-thriller series that would give viewers an origin story of the epidemic that turned the United States into a wasteland full of, well, the walking dead. The show has us on the edge of our seats because even though we know the only way to kill the walkers is to spike them in the brain, the characters don’t know that. Yet. On Oct. 11, watch parties continue with the first episode of The Walking Dead‘s season six.
Sundays | 9 p.m. | The Falcon, 819 E. Washington St. | free | 407-423-3060 | facebook.com/thefalconbar

Sept. 30, Oct. 2, Nov. 4: Racing to Zero: In Pursuit of Zero Waste (pictured above)
Yes, this is a documentary about how we handle trash in the United States, but it’s not a dull trudge or a lecture. Instead, it’s a fast-moving film that talks about reducing the amount of waste we produce by thinking about it differently – perhaps if we considered our garbage a resource, we could turn it into something useful. The movie tracks the progress the city of San Francisco is making on its pledge to achieve zero waste by 2020 by finding new uses for the stuff we throw away. Racing to Zero screens on Sept. 30 and Oct. 2 as part of the Global Peace Film Festival, and again on Nov. 4 at the Southeast Museum of Photography, Daytona State College.
8:30 p.m., Sept. 30 | Premier Cinema at Fashion Square, 3201 E. Colonial Drive | $8 ; also 6 pm, Oct. 2 | Winter Park Library, 460 E. New England Ave., Winter Park | peacefilmfest.org
2 p.m., Nov. 4 | Southeast Museum of Photography, Daytona State College, Daytona Beach | free | 386-506-4475 | smponline.org

« Feast your eyes: 5 art shows we're looking forward to this fall   |   Everything worth doing in Orlando this fall »